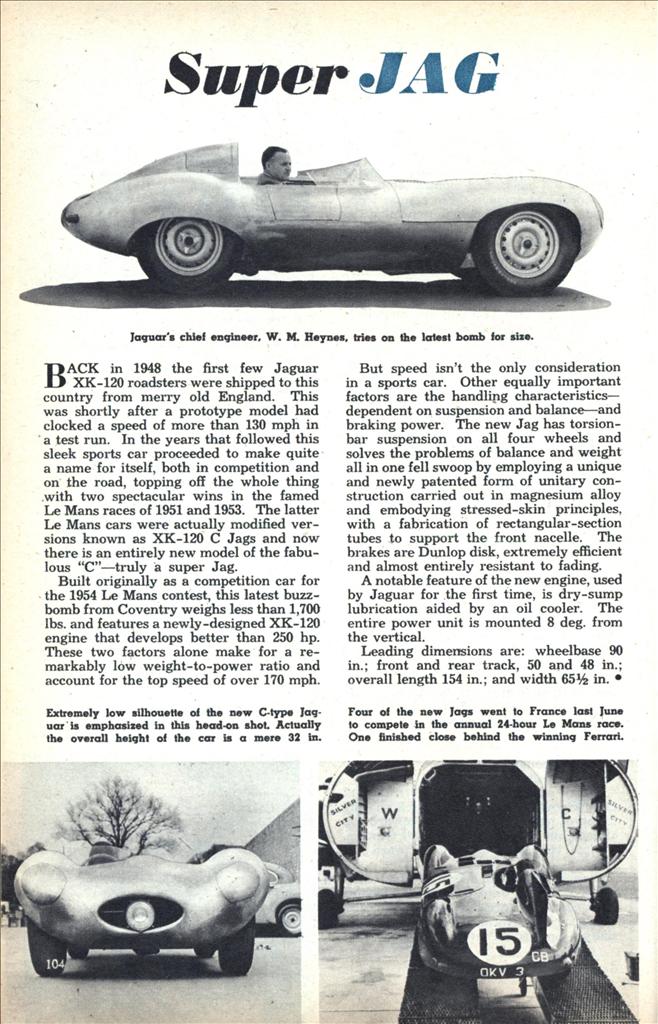 BACK in 1948 the first few Jaguar XK-120 roadsters were shipped to this country from merry old England. This was shortly after a prototype model had clocked a speed of more than 130 mph in a test run. In the years that followed this sleek sports car proceeded to make quite a name for itself, both in competition and on the road, topping off the whole thing with two spectacular wins in the famed Le Mans races of 1951 and 1953. The latter Le Mans cars were actually modified versions known as XK-120 C Jags and now there is an entirely new model of the fabulous “C”—truly a super Jag.

Built originally as a competition car for the 1954 Le Mans contest, this latest buzz-bomb from Coventry weighs less than 1,700 lbs. and features a newly-designed XK-120 engine that develops better than 250 hp. These two factors alone make for a remarkably low weight-to-power ratio and account for the top speed of over 170 mph.

But speed isn’t the only consideration in a sports car. Other equally important factors are the handling characteristics-dependent on suspension and balance—and braking power. The new Jag has torsion-bar suspension on all four wheels and solves the problems of balance and weight all in one fell swoop by employing a unique and newly patented form of unitary construction carried out in magnesium alloy and embodying stressed-skin principles, with a fabrication of rectangular-section tubes to support the front nacelle. The brakes are Dunlop disk, extremely efficient and almost entirely resistant to fading.

A notable feature of the new engine, used by Jaguar for the first time, is dry-sump lubrication aided by an oil cooler. The entire power unit is mounted 8 deg. from the vertical.