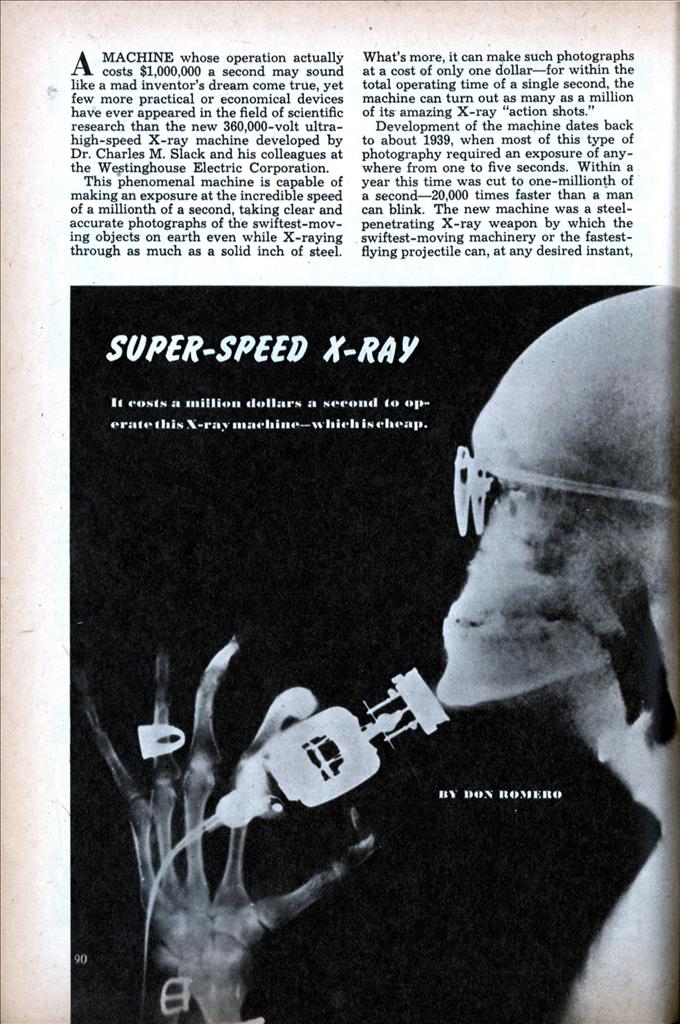 IT costs a million dollars a second to operate this X-ray machine – which is cheap.

A MACHINE whose operation actually costs $1,000,000 a second may sound like a mad inventor’s dream come true, yet few more practical or economical devices have ever appeared in the field of scientific research than the new 360,000-volt ultra -high-speed X-ray machine developed by Dr. Charles M. Slack and his colleagues at the Westinghouse Electric Corporation.

This phenomenal machine is capable of making an exposure at the incredible speed of a millionth of a second, taking clear and accurate photographs of the swiftest-moving objects on earth even while X-raying through as much as a solid inch of steel.

What’s more, it can make such photographs at a cost of only one dollar—for within the total operating time of a single second, the machine can turn out as many as a million of its amazing X-ray “action shots.”

Development of the machine dates back to about 1939, when most of this type of photography required an exposure of anywhere from one to five seconds. Within a year this time was cut to one-millionth of a second—20,000 times faster than a man can blink. The new machine was a steel-penetrating X-ray weapon by which the swiftest-moving machinery or the fastest-flying projectile can, at any desired instant, be photographically shot dead in its tracks. Within a year after it was completed the machine was conscripted by our armed forces, who lost no time putting it to work on some tough ballistic problems which had our experts pretty well stumped. One of the more important posers which it solved was why certain types of our armor-piercing shells weren’t getting through enemy armor. By taking a few side-view shots of these projectiles as they sped down the barrel of a gun, the machine soon showed that the armor-piercing tips of the projectiles were very often becoming detached from the shells even before the shells had a chance to leave the muzzle of the gun. Other photo series revealed other defects. Another vital war job performed by the machine was in revealing needed facts on the fragmentation pattern of bombs.

One of the most interesting details turned up in the fragmentation studies was the extraordinary damage that a tiny fragment can cause even when it passes through only the soft part of a man’s body, such as the calf of his leg. By taking pictures of a small fragment whipping through a leg of mutton, it was discovered that during the brief interval the fragment is moving through the flesh it opens a surprisingly large cavity, in much the same manner that a small stone thrown at high speed into a lake will cause the water to splash aside so as to momentarily form a sizeable “hole.” It was found that flesh, like the water, quickly “recovers,” usually so completely that hardly any appreciable “puncture” is left by the fragment. And totally unexpected was the discovery that, so great is the shock imparted by the fragment, even when it is extremely small, if it is traveling fast enough it can often break the main bone in a man’s leg or arm even though it may miss the bone itself by as much as an inch. An unusual value of the machine is that it has no difficulty penetrating smoke and flame. Because of this, metallurgical technicians expect it to be of great value in the study of arc-welding processes. Up to now, ordinary photography has been of little help because the metal under study was invariably blotted out by the glare and fumes produced by the arc.

In addition to metallurgy are any number of industrial and medical lines in which the machine promises to be of exceptional research value. High up on the list are heretofore impossible “action” studies of all types of metal-encased machinery as well as a wide variety of high-speed electrical appliances. One field in particular in which the machine is expected to be of unusual help is in the analyzing of compression engines. It is the firm belief of Dr. Slack that, by being able to peer through the side of a cylinder while the engine is running at top speed, the machine may very conceivably reveal extremely vital details on valve distortion and piston strain which up to now have not even been suspected by automotive engineers.

In contrast to the complexity of the work which this machine is capable of performing is the remarkable simplicity of the machine’s construction and operation. Essentially it consists of nothing more than six reservoir-like condensers (with spark-gaps and resistors), each of which can be charged to a potential of from 25,000 to 60,000 volts; a transformer and rectifier which are used to charge the condensers; a small control board with comparatively few controls; and a very large electronic tube of special type capable of producing enough electrons to yield a current of from 1,000 to 2,000 amperes.

In taking a picture of a moving object, such as a speeding bullet, the technician first arranges the gun so that the bullet will move between the electronic tube and the X-ray plate, passing as close to the plate as possible. He then charges the condensers with just the amount of electricity required to photograph the bullet. To set off the electronic tube, he may then resort to any one of a number of activating means: a photoelectric cell setup in which the bullet breaks the light-beam to release the energy from the condensers; a microphone arrangement in which the report of the gun serves as the activator; a circuit-breaking arrangement in which the flying bullet snaps a thin wire to set off the discharge; or a simple mechanical arrangement connecting trigger and condenser.

At present there are about 25 of these machines in the world. Of the dozen or more in this country, about eight are being used by various U. S. Government arsenals. Westinghouse believes that both industry and science will find increasing use for the instrument. For one thing, it can be commercially produced for somewhere around $10,000, which is not much, and for another, because of its simplicity, it can be handled by one man who can be taught all he needs to know about its operation in a week. One feature of the machine is that the only part subject to appreciable wear is the electronic tube. This tube takes such a severe jolt every time a high voltage is thrown at it that its life-span is only about one one-thousandth of a second. Still, this gives a life-span of a thousand photographs.