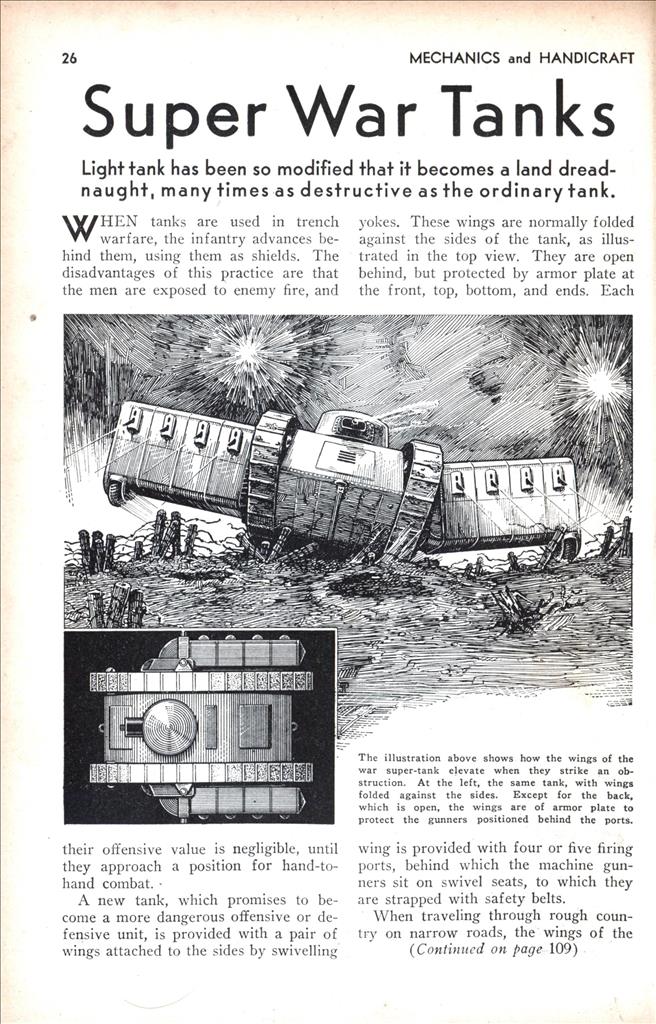 Light tank has been so modified that it becomes a land dread-naught, many times as destructive as the ordinary tank.

WHEN tanks are used in trench warfare, the infantry advances behind them, using them as shields. The disadvantages of this practice are that the men are exposed to enemy fire, and their offensive value is negligible, until they approach a position for hand-to-hand combat.

A new tank, which promises to become a more dangerous offensive or defensive unit, is provided with a pair of wings attached to the sides by swivelling yokes. These wings are normally folded against the sides of the tank, as illustrated in the top view. They are open behind, but protected by armor plate at the front, top, bottom, and ends. Each wing is provided with four or five firing ports, behind which the machine gunners sit on swivel seats, to which they are strapped with safety belts.

When traveling through rough country on narrow roads, the wings of the tank are folded against the sides, which operation is accomplished through gears, driven by the tank’s motor. When ready for action, the wings are spread out as shown in the larger picture. Each wing is fitted with a bullet-proof rubber tire and the flexible hinged joint permits the tank to travel over very uneven roads without damaging the lateral structures.

It has also been proposed to fit the lower edges of the wings with power nippers, to cut through barbed wire entanglements, thus opening a wider path through which infantry can follow. The open back of each wing permits the machine gunners to drop to the ground and charge the enemy at the opportune moment. This tank, designed by Joseph Pignone, is to be submitted to the U.S. government.