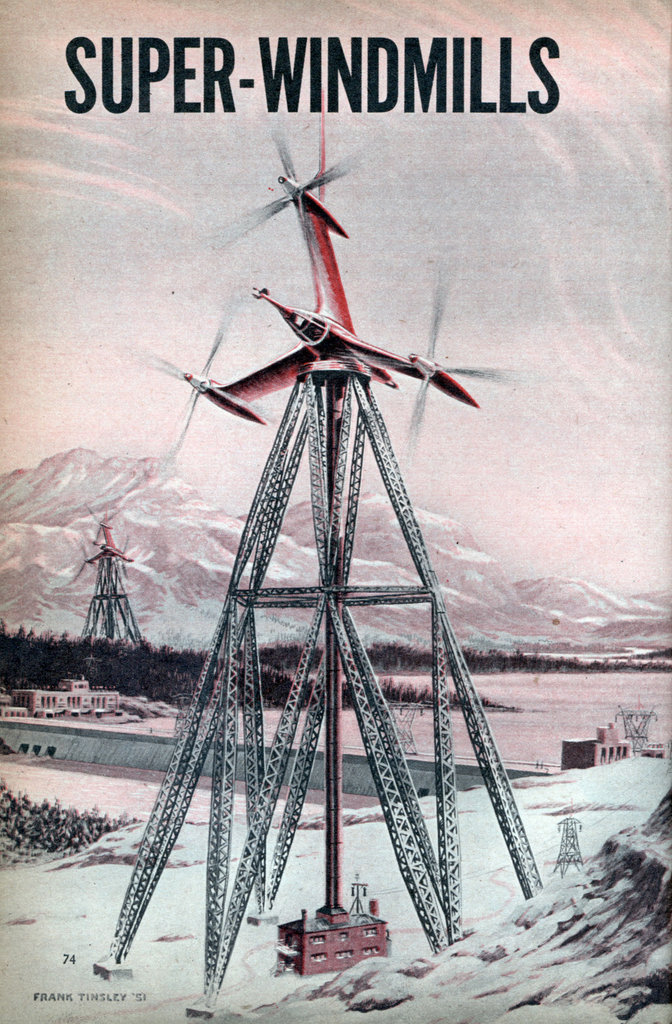 Plans are being made to harness mankind’s oldest and cheapest source of power for industry by means of huge aerogenerators.

THE next few years may see a decided change in the landscape of our country. In certain strategic places which promise a constant, strong wind such as mountain passes, will grow strange structures resembling the Martian machines of H. G. Wells. But these will be instruments of construction, rather than destruction â€”tall, steel towers supporting fans to convert wind energy into electrical power.

Members of the Congressional Interior and Insular Affairs Committee are enthusiastic over a new proposal to erect these machines. Introduced by Representative John R. Murdock, D.,Ariz., chairman of the committee, a bill drawn up by the Department of the Interior and endorsed by the Federal Power Commission authorizes a $2,750,000 government project to build a test aerogenerator.

In 1941, a full-scale instrument was built on a mountain top in Vermont and hooked up to the high tension system of the Central Vermont Public Service Corporation as an auxiliary power source. Mounted on a 110-foot tower, its twin 56-foot blades were designed to develop 1,200 kilowatts at a wind velocity of 30 mph. Under favorable conditions, it actually developed 1,400. Although a practical success, structural and financial difficulties ended the experiment.

The newly proposed design is the product of years of research by Percy H. Thomas, well-known power plant engineer formerly of the Federal Power Commission. Towering 475 feet above the ground and equipped with a pair of three-bladed impellers, it operates automatically in a wind as light as 10 mph. At its maximum required velocity of 28 mph it delivers 7,500 kilowatts. During dangerously high winds the impeller blades can be feathered and braked to a halt and the structure is stressed to withstand hurricane velocities up to 200 mph. The plant is completely self contained with a central generator, converter, transformer, etc., mounted in a rotating housing atop the tower. The energy developed by the 150-foot diameter impellers is transmitted to the generator through geared-up shafting. All parts of the plant are accessible for inspection and repair.

The techniques of modern airplane construction suggest the possibility of further development of this design. (See illustration.) The use of light metals would lighten loads and relieve stresses. A central tubular elevator shaft would strengthen the structure, provide easier access to the operating head in foul weather and act as a protected duct for the power lines. The addition of a third impeller unit would increase the power outlet by 50 per cent while increasing the overall weight of the rotating head by but 25 per cent. Mounting small, individual generators in each impeller nacelle not only balances the weight of the wheel but also eliminates weighty, vibration-producing shaft transmissions. Instead, simple power lines are led through the pylons and elevator shaft to the ground where the heavy elements of the plant are installed in a substantial building. This placement of the generators, converters, etc., materially lightens the tower structure.

Dependent on the ever-changing wind, a single aerogenerator obviously can not be relied upon for continuous or “firm” power. However, interconnected but scattered units can maintain a firm average output. Tests indicate that wind velocities in given locations remain constant for 22 out of the 24 hours. This can be enhanced further by placing the aerogenerator groups in mountain passes where converging ranges funnel the wind flow in a strong, steady venturi effect. Such groups, acting as a free-fuel auxiliary to established steam or hydroelectric systems, may supply up to 40 per cent of the total utility power. During slack periods of consumption, this aero energy can pump used water back into reservoirs, thus storing power for future use. This means that during droughts, scarce water can be used to develop power over and over again.

As compared with complicated steam power plants and the vast sums spent on hydroelectric dams and reservoirs, the first cost of the aerogenerator is modest. Even this would be considerably reduced by the limited mass production necessary to produce a moderate number of aerogenerator complexes. Once installed, operation costs are extremely low.

European experts, working under the Marshall plan, have launched a research program to speed the harnessing of the wind for electricity. England is said to be three years ahead of us in development Recently a German engineer entered the field with a proposal to build 1,000-foot wind towers to provide power for the industrialization of Schleswig-Holtein.

Russia led the world in aerogeneration development during the 1930’s but like most other Red scientific projects its postwar status is veiled by the Iron Curtain. In her desperate effort at industrialization, she may seize the lead again. Meanwhile, with Congress now alerted to the opportunity, we can hope that America is awakening to the possibilities of this great, free source of untapped power.