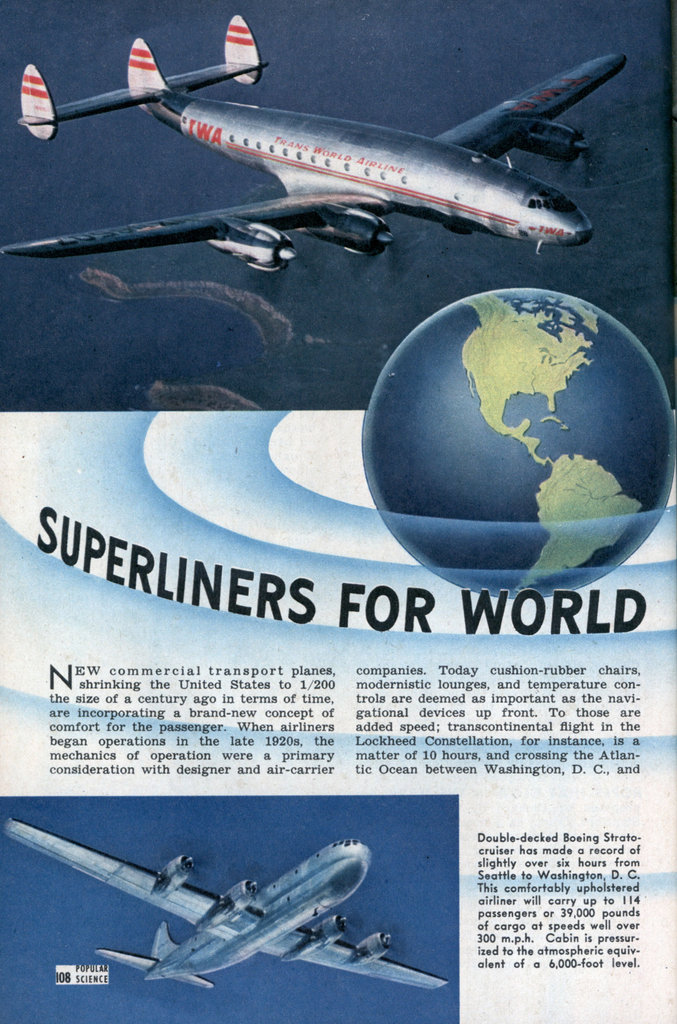 NEW commercial transport planes, shrinking the United States to 1/200 the size of a century ago in terms of time, are incorporating a brand-new concept of comfort for the passenger. When airliners began operations in the late 1920s, the mechanics of operation were a primary consideration with designer and air-carrier companies. Today cushion-rubber chairs, modernistic lounges, and temperature controls are deemed as important as the navigational devices up front. To those are added speed; transcontinental flight in the Lockheed Constellation, for instance, is a matter of 10 hours, and crossing the Atlantic Ocean between Washington, D. C, and Paris, France, takes less than 13 hours. Designers and engineers are preparing other titans to speed the new era of air travelâ€”Douglas’ DC-6, the huge Strato-cruiser by Boeing, and the gigantic Model 37, by Consolidated Vultee. Soon a passenger may breakfast in London, enjoy a late lunch in New York, and go to bed that evening in Los Angeles.

Just what do these new giants offer?

Constellations carry 57 passengers more than twice as fast as the familiar veteran, the 180-mile-an-hour DC-3. The fuselage in cross section is a perfect circle. Two superchargers pour fresh air into the cabin to hold pressure at a simulated level of not more than 8,000 feet, and heating and refrigeration control the temperature. Circular windows enable passengers to enjoy the unfolding view. More than 100 Constellations are being rushed to completion. When the DC-6 makes its appearance, it will be 80 inches longer than the DC-4 and will cruise at about 275 m.p.h. Passengers will enter this plane through a door aft of the wings. They will relax in cushion-rubber chairs, and stewardesses will serve meals from buffets near the door.

The two decks of the Stratocruiser have been created by building one fuselage above the other. The bottom section is as wide as the Army’s Superfortress. The upper is slightly larger.

Consolidated Vultee’s Model 37, developing 30,000 horsepower, will have a cruising speed of 342 m.p.h. This monster will be nearly twice as heavy as any land plane yet flown. On nonstop flights up to 4,200 miles, 204 passengers will enjoy the comfort of four cabins on two decks.

These planes use plenty of gas. At takeoff, the Model 37’s six big engines will consume fuel faster than you could bail it out of a barrel with a 10-quart pail, but they develop more power than 360 Ford V-8 engines. The electrical system would supply a town of 5,000.