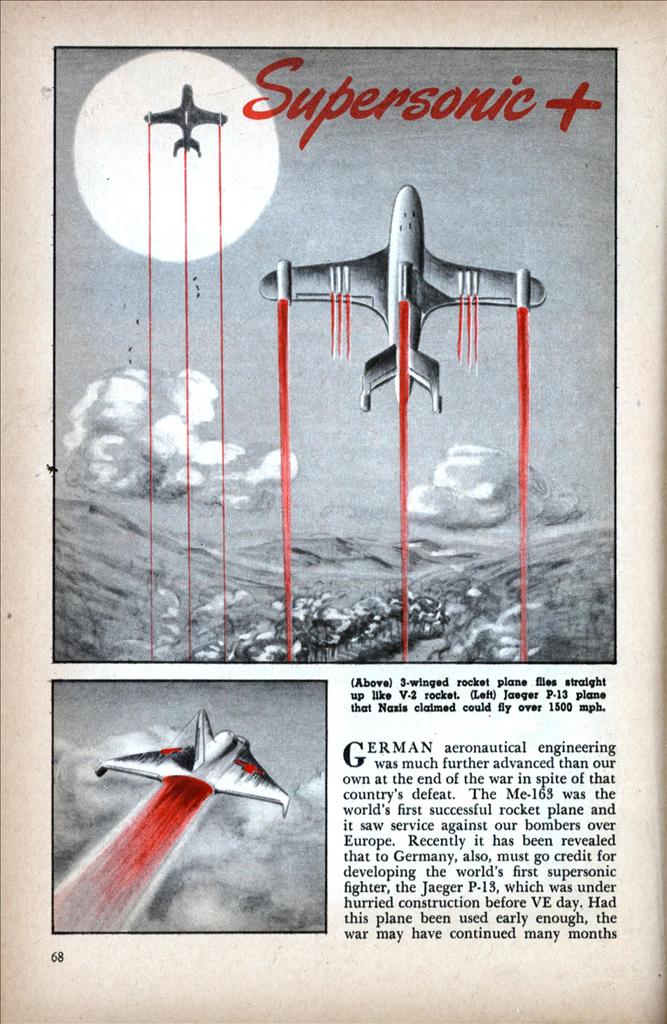 GERMAN aeronautical engineering was much further advanced than our own at the end of the war in spite of that country’s defeat. The Me-163 was the world’s first successful rocket plane and it saw service against our bombers over Europe. Recently it has been revealed that to Germany, also, must go credit for developing the world’s first supersonic fighter, the Jaeger P-13, which was under hurried construction before VE day. Had this plane been used early enough, the war may have continued many months longer, and might even have meant Nazi mastery of the skies over the Continent.

Powered by a revolutionary and advanced Lorin type ram-jet unit, a wind tunnel model had been tested and the prototype under construction when Nazi military might crumbled. Unlike any other fighter or aircraft in appearance, it was an all-wing design, with an extremely sharp taper commencing at the wing roots. A horizontal oval air duct provided the intake scoop at the machine’s nose. Simplest and most efficient of all jet turbine designs, the ram-jet (or athodyd) powerplant uses the forward speed of the craft to produce air compression, therefore increasing in efficiency as the velocity increases.

The only protuberances of the machine were the single vertical fin and rudder, and a very low, streamlined cockpit canopy which flowed into the fuselage-wing contours. The cockpit was directly aft of the nose-intake duct, and had a very slight and rounded turtleback to the vertical fin.

Wingtips were turned down vertically; this seemed to add a substantial degree of stability. The Germans succeeded in discovering the solution to compressibility, something that has baffled our designers constantly with 500 mph-plus aircraft. Apparently a razor-sharp leading edge for the wing is not the answer. The 550-mph rocket-propelled 8-263 and Me-163B fighters were the first machines to utilize the German concept, an airfoil section with an unusually sharp sweep-back of entire airfoil and controls.

Another of the most advanced and unusual of the German fighter type designs is the Triebflugel Flugzeug (power-winged airplane), that has a cigar-shaped fuselage with three airfoil sections. The two main wings are set in horizontal position with marked upward dihedral, each with conventional control surfaces. The third unit is in a vertical position.

The empennage is of the full vertical and horizontal control-surface type, basically of the same design as that of the Dornier Do-335 “mystery fighter.” The tips of each unit are rounded out in one circular piece.

The propulsion units of the plane are ram-jet, or athodyd. They closely resemble long tubes and have straight-through ducts which are capable of atomizing any combustible fuel, whether gas or liquid. German tests with pulverized coal as a jet unit fuel may have been realized successfully with this plane.

Powerful nose armament of cannon and/or machine guns are fitted in the nose directly forward of the streamlined cockpit. Accommodation for the single pilot is far up in the nose, making for excellent visibility.

The three-winged plane takes off in the same manner as the standard A-4 vertical rocket: it is stood on its specially-designed tail and, with the aid of auxiliary rockets, is hurtled into the air. Because runways would not be necessary, the Germans hoped to create secret landing sites for the plane that would be invisible to Allied bombardiers. The rockets were to have been jettisonable, which would keep fighting weight to a minimum.

With no coal now available for homes in Switzerland, local peat is being used.