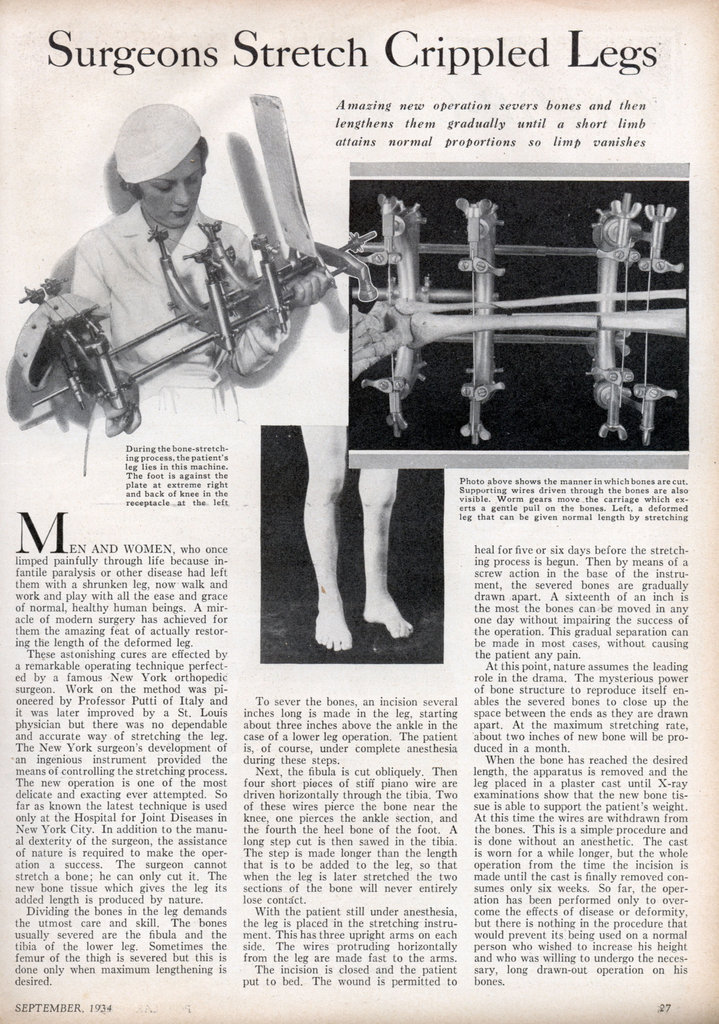 MEN AND WOMEN, who once limped painfully through life because infantile paralysis or other disease had left them with a shrunken leg, now walk and work and play with all the ease and grace of normal, healthy human beings. A miracle of modern surgery has achieved for them the amazing feat of actually restoring the length of the deformed leg.

These astonishing cures are effected by a remarkable operating technique perfected by a famous New York orthopedic surgeon. Work on the method was pioneered by Professor Putti of Italy and it was later improved by a St. Louis physician but there was no dependable and accurate way of stretching the leg. The New York surgeon’s development of an ingenious instrument provided the means of controlling the stretching process.

The new operation is one of the most delicate and exacting ever attempted. So far as known the latest technique is used only at the Hospital for Joint Diseases in New York City. In addition to the manual dexterity of the surgeon, the assistance of nature is required to make the operation a success. The surgeon cannot stretch a bone; he can only cut it. The new bone tissue which gives the leg its added length is produced by nature.

Dividing the bones in the leg demands the utmost care and skill. The bones usually severed are the fibula and the tibia of the lower leg. Sometimes the femur of the thigh is severed but this is done only when maximum lengthening is desired.

To sever the bones, an incision several inches long is made in the leg, starting about three inches above the ankle in the case of a lower leg operation. The patient is, of course, under complete anesthesia during these steps.

Next, the fibula is cut obliquely. Then four short pieces of stiff piano wire are driven horizontally through the tibia. Two of these wires pierce the bone near the knee, one pierces the ankle section, and the fourth the heel bone of the foot. A long step cut is then sawed in the tibia. The step is made longer than the length that is to be added to the leg, so that when the leg is later stretched the two sections of the bone will never entirely lose contact.

With the patient still under anesthesia, the leg is placed in the stretching instrument. This has three upright arms on each side. The wires protruding horizontally from the leg are made fast to the arms.

The incision is closed and the patient put to bed. The wound is permitted to heal for five or six days before the stretching process is begun. Then by means of a screw action in the base of the instrument, the severed bones are gradually drawn apart. A sixteenth of an inch is the most the bones can be moved in any one day without impairing the success of the operation. This gradual separation can be made in most cases, without causing the patient any pain.

At this point, nature assumes the leading role in the drama. The mysterious power of bone structure to reproduce itself enables the severed bones to close up the space between the ends as they are drawn apart. At the maximum stretching rate, about two inches of new bone will be produced in a month.

When the bone has reached the desired length, the apparatus is removed and the leg placed in a plaster cast until X-ray examinations show that the new bone tissue is able to support the patient’s weight. At this time the wires are withdrawn from the bones. This is a simple procedure and is done without an anesthetic. The cast is worn for a while longer, but the whole operation from the time the incision is made until the cast is finally removed consumes only six weeks. So far, the operation has been performed only to overcome the effects of disease or deformity, but there is nothing in the procedure that would prevent its being used on a normal person who wished to increase his height and who was willing to undergo the necessary, long drawn-out operation on his bones.