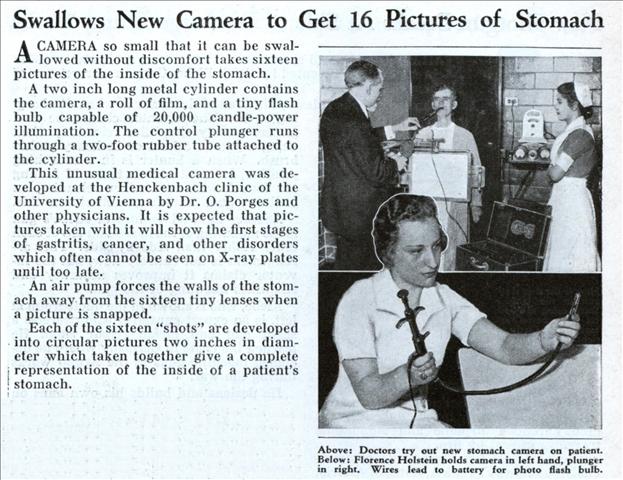 Swallows New Camera to Get 16 Pictures of Stomach

A CAMERA so small that it can be swallowed without discomfort takes sixteen pictures of the inside of the stomach.

A two inch long metal cylinder contains the camera, a roll of film, and a tiny flash bulb capable of 20,000 candle-power illumination. The control plunger runs through a two-foot rubber tube attached to the cylinder.

This unusual medical camera was developed at the Henckenbach clinic of the University of Vienna by Dr. O. Porges and other physicians. It is expected that pictures taken with it will show the first stages of gastritis, cancer, and other disorders which often cannot be seen on X-ray plates until too late.

An air pump forces the walls of the stomach away from the sixteen tiny lenses when a picture is snapped.

Each of the sixteen “shots” are developed into circular pictures two inches in diameter which taken together give a complete i representation of the inside of a patient’s stomach.