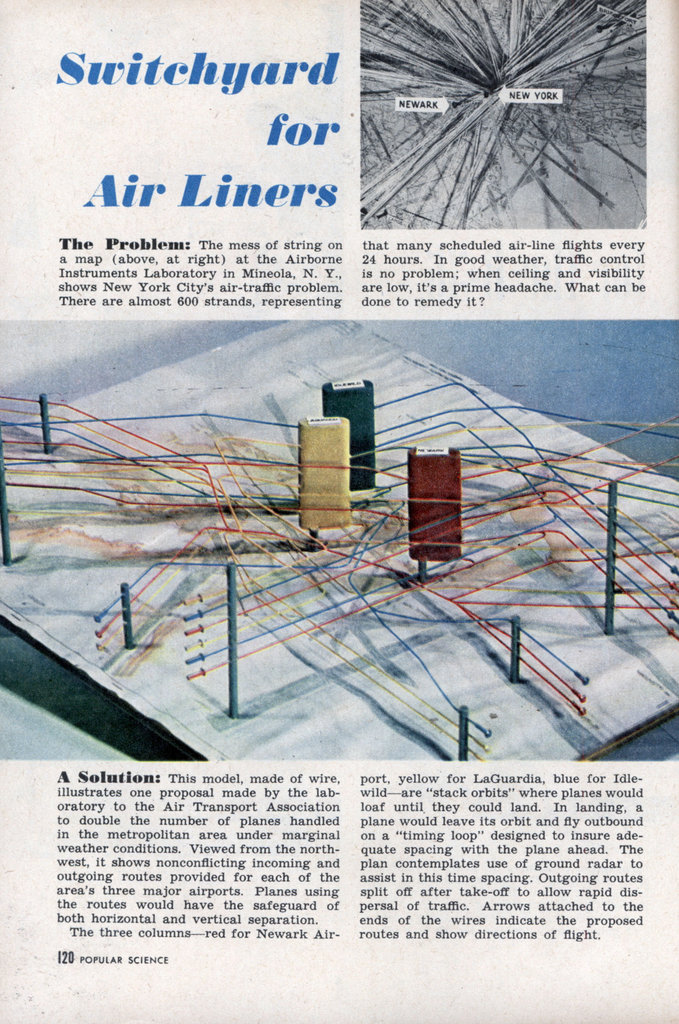 The Problem: The mess of string on a map (above, at right) at the Airborne Instruments Laboratory in Mineola, N. Y., shows New York City’s air-traffic problem. There are almost 600 strands, representing that many scheduled air-line flights every 24 hours. In good weather, traffic control is no problem; when ceiling and visibility are low, it’s a prime headache. What can be done to remedy it?

A Solution: This model, made of wire, illustrates one proposal made by the lab-oratory to the Air Transport Association to double the number of planes handled in the metropolitan area under marginal weather conditions. Viewed from the northwest, it shows nonconflicting incoming and outgoing routes provided for each of the area’s three major airports. Planes using the routes would have the safeguard of both horizontal and vertical separation.

The three columns—red for Newark Airport, yellow for LaGuardia, blue for Idlewild—are “stack orbits” where planes would loaf until they could land. In landing, a plane would leave its orbit and fly outbound on a “timing loop” designed to insure adequate spacing with the plane ahead. The plan contemplates use of ground radar to assist in this time spacing. Outgoing routes split off after take-off to allow rapid dispersal of traffic. Arrows attached to the ends of the wires indicate the proposed routes and show directions of flight.