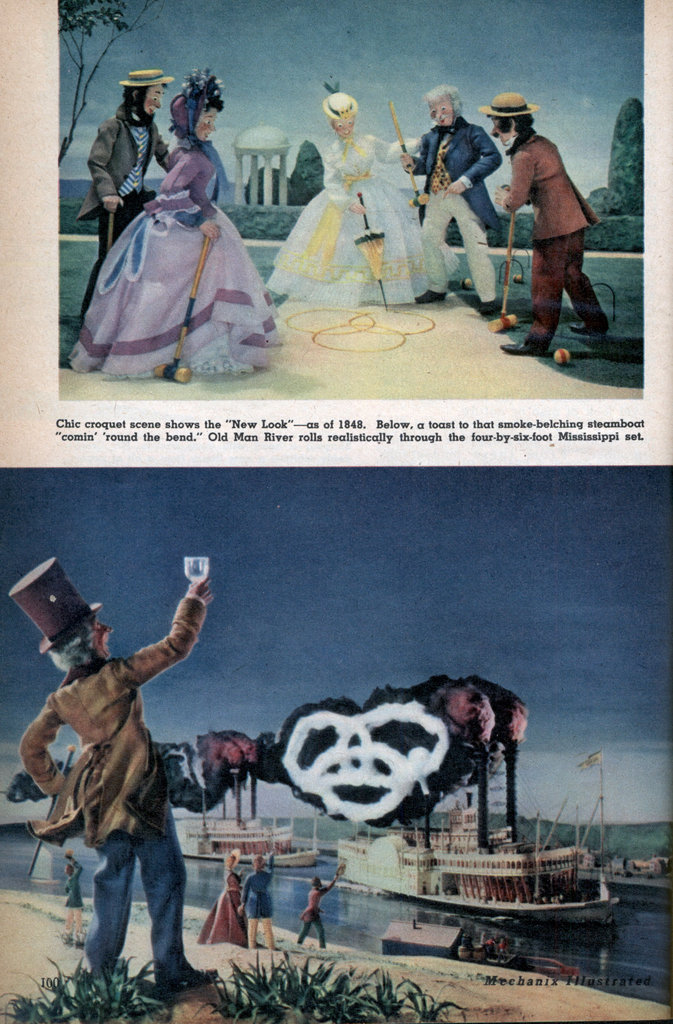 DON’T look now, but that man’s making a scene again. Maybe that’s no bonanza in the crusty old prospector’s pan, but there’re both gold and glory in the scene for Forrest C. Crooks. And Mr. Crooks is having more fun than Punch and Judy in making scenes for his “real-life” miniature stage.

Mr. Crooks started something new in advertising illustrations. A magazine illustrator by profession, Mr. Crooks put aside his brush and pen to take up carving and set designing to “build” new drama into advertising.

Have you noticed recently the magazine advertisements in which the illustrations look like marvelously detailed and naturalistic scenes actually constructed in miniature and reproduced in color? That’s just what they are.

Mr. Crooks, a pioneer in this technique, performs his magic in a renovated barn on a farm in Bucks County, Pa.

Around Mr. Crooks is a group of experts. His wife, their son, Corydon, and . Corydon’s wife, with several other assistants, are all skilled craftsmen and specialists in the many departments of this varied artâ€”woodcarving, metal work, painting, costuming, research. Mr. Crooks puts all his experience as a magazine illustrator, designer of stained-glass windows, and an innovator in enamel work, ceramics, and textiles to use in solving the intricate problems of building advertisements in three dimensions.

Mr. Crooks first gets a sketch of the page layout for the advertisement from the advertising agency. Since the constructed scene must conform to the lay-out’s space allotment for text and picture, this sketch serves as a rough blueprint.

Problems of composition, lighting, perspective, and scale are studied initially by making a cardboard mock-up of the scene. For reference he sketches the scene on glass with a grease pencil.

This perspective screen, a device often used by muralists and sculptors, is set on a standard at a fixed point while the set is being built. By looking through the screen the set designer can see how he must build his stage and place his actors and props in the scene. Later, the photographer taking pictures for photoengravings must place his camera according to this fixed viewpoint, or the “built-in” perspective will be lost.

Now the meticulous work of building the final scene begins. Extensive research is undertaken to assure accuracy on the setting, costumes, and the details of everyday life during the period pictured in the scene. A landscape set, for example, may require 50 or more objects â€”trees, bridges, houses, human figures, animals, and geographical features, all of which must be natural as life but exciting as the first night of a Broadway hit.

To simulate effects such as ice, running water, or a storm at sea, Mr. Crooks often has to try to improve on nature. Only by exhaustive trial and error does the designer learn to portray a frozen pond by staining paraffin a pale blue-green; to make stars twinkle by drilling small -holes on a painted backdrop and backlighting it; or to pour mineral oil down a painted creek-bed while the scene is being photographed as “running water.”

Base for a set, which may be from five to seven feet square, is made of thin plywood built up to the required shape by papier-mache. The only portion of a scene that is not worked out in the round is the backdrop representing a distant landscape or the sky, which ordinarily is painted on hard board or canvas.

Mr. Crooks carves animals and smaller human figures from well-seasoned poplar, but the mannikins which occupy the foreground of a scene are as precisely made as the models used in an anatomy class and may be posed realistically standing, sitting, running, or walking. These are stock torsos, ten inches high. Different heads, hands, and feet can be attached to depict either sex and what-every type of character is desired. Mr. Crooks uses the skill he acquired in his hobby of puppet-making to turn out the odds and ends of anatomy needed to create the new characters as his drama unfolds.

After the characters have been painted, they are fitted with wigs or beards and I decked out in full costume. At last the characters are ready to strut their brief hour upon the stage. Their little drama acted out, they are dismantled until they can come to life again in some other role. While Mr. Crooks is supervising the set and carving out the figures, other details are being prepared by his staff. Mrs. Crooks dresses the mannikin to suit his part. Corydon Crooks works out the “built-in” perspective.

Three weeks or more is required to produce an elaborate scene. Every set poses new problems, and often work must be suspended until experiments show how to dramatize on the little stage some novel look of man or nature.

After a scene has been completed, it is packed carefully and shipped to the photographer. From these photographs color plates are made for the printer. Then the presses roll, and the miniature drama is staged again before you in the pages of your magazine.