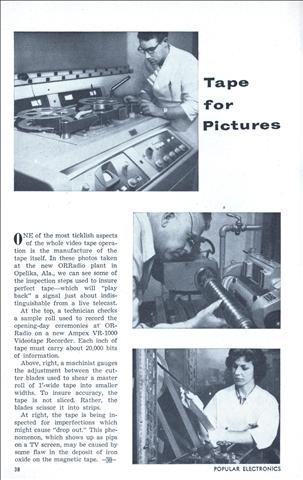 ONE of the most ticklish aspects of the whole video tape operation is the manufacture of the tape itself. In these photos taken at the new ORRadio plant in Opelika, Ala., we can see some of the inspection steps used to insure perfect tape—which will “play back” a signal just about indistinguishable from a live telecast. 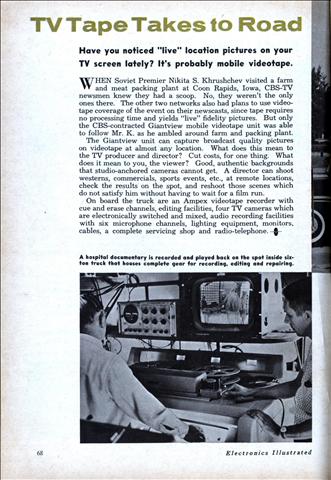 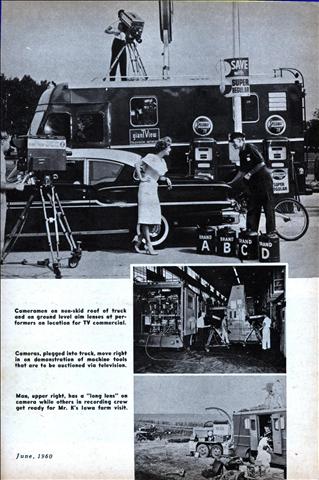 WHEN Soviet Premier Nikita S. Khrushchev visited a farm and meat packing plant at Coon Rapids, Iowa, CBS-TV newsmen knew they had a scoop. No, they weren’t the only ones there. 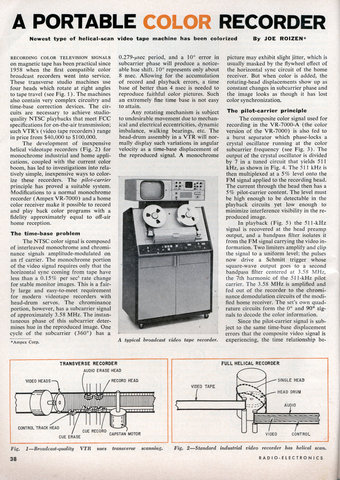 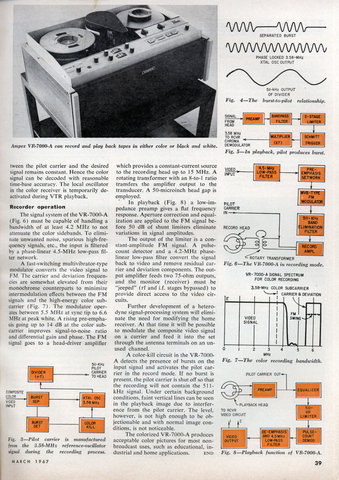 Newest type of helical-scan video tape machine has been colorized

RECORDING COLOR TELEVISION SIGNALS on magnetic tape has been practical since 1958 when the first compatible color broadcast recorders went into service. These transverse studio machines use four heads which rotate at right angles to tape travel (see Fig. 1). The machines also contain very complex circuitry and time-base correction devices. The circuits are necessary to achieve studio-quality NTSC playbacks that meet FCC specifications for on-the-air transmission; such VTR’s (video tape recorders) range in price from $40,000 to $100,000. 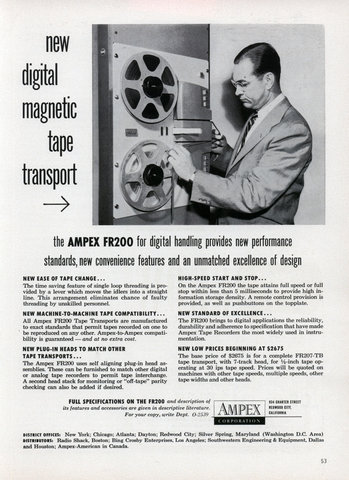 the AMPEX FR200 for digital handling provides new performance standards, new convenience features and an unmatched excellence of design
NEW EASE OF TAPE CHANGE…
The time saving feature of single loop threading is provided by a lever which moves the idlers into a straight line. This arrangement eliminates chance of faulty threading by unskilled personnel. 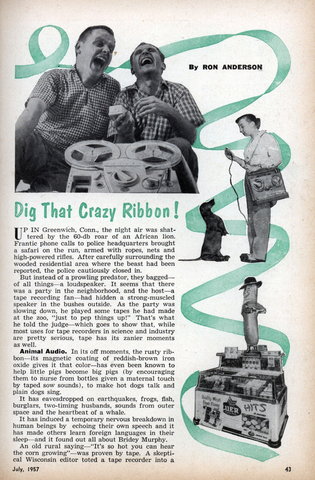 UP IN Greenwich, Conn., the night air was shattered by the 60-db roar of an African lion. Frantic phone calls to police headquarters brought a safari on the run, armed with ropes, nets and high-powered rifles. After carefully surrounding the wooded residential area where the beast had been reported, the police cautiously closed in.

But instead of a prowling predator, they bagged â€”of all thingsâ€”a loudspeaker. It seems that there was a party in the neighborhood, and the hostâ€”a tape recording fanâ€”had hidden a strong-muscled speaker in the bushes outside. As the party was slowing down, he played some tapes he had made at the zoo, “just to pep things up!” That’s what he told the judgeâ€”which goes to show that, while most uses for tape recorders in science and industry are pretty serious, tape has its zanier moments as well.