Discover the Mysteries of the Heavens (Jul, 1956)

I was going to quip about how advertisers liked to just throw Einstein’s name into an ad to convey a false sense of association, but in this case there seems to be a real one. According to Mattersdorf’s obituary in The New York Times, Einstein was an accounting client of his and did, in fact, proofread his book. 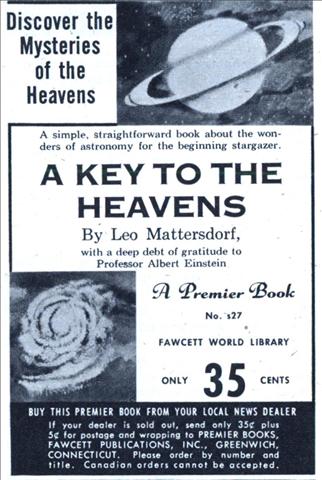 Discover the Mysteries of the Heavens

A simple, straightforward book about the wonders of astronomy for the beginning stargazer.

A KEY TO THE HEAVENS

By Leo Mattersdorf,
with a deep debt of gratitude to Professor Albert Einstein

I love the side bar on the second page which predicts that WWIII will occur in late 1952. 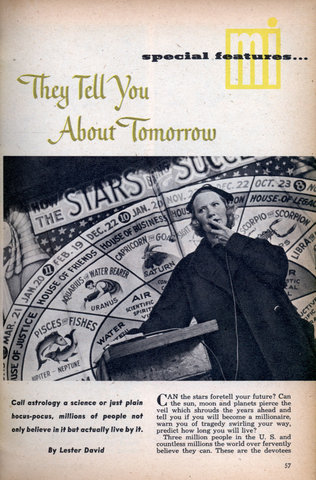 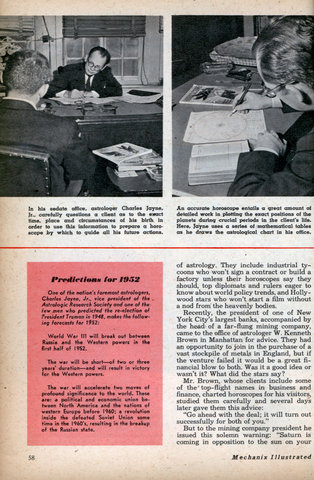 They Tell You About Tomorrow

Call astrology a science or just plain hocus-pocus, millions of people not only believe in it but actually live by it.

CAN the stars foretell your future? Can the sun, moon and planets pierce the veil which shrouds the years ahead and tell you if you will become a millionaire, warn you of tragedy swirling your way, predict how long you will live?

Three million people in the U. S. and countless millions the world over fervently believe they can. These are the devotees of astrology. They include industrial tycoons who won’t sign a contract or build a factory unless their horoscopes say they should, top diplomats and rulers eager to know about world policy trends, and Hollywood stars who won’t start a film without a nod from the heavenly bodies.

Recently, the president of one of New York City’s largest banks, accompanied by the head of a far-flung mining company, came to the office of astrologer W. Kenneth Brown in Manhattan for advice. They had an opportunity to join in the purchase of a vast stockpile of metals in England, but if the venture failed it would be a great financial blow to both. Was it a good idea or wasn’t it? What did the stars say?