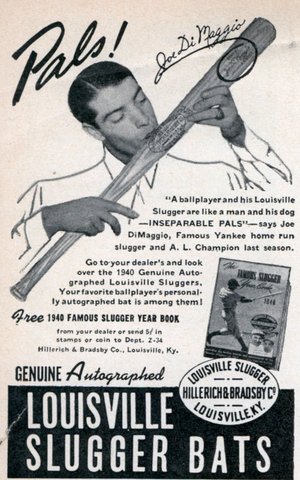 “A ballplayer and his Louisville Slugger are like a man and his dog —INSEPARABLE PALS”— says Joe DiMaggio, Famous Yankee home run slugger and A.L. Champion last season.

Or they could just move to California. It’s a pity. It wold have been nice to have a Buckminster Fuller designed stadium in Brooklyn. 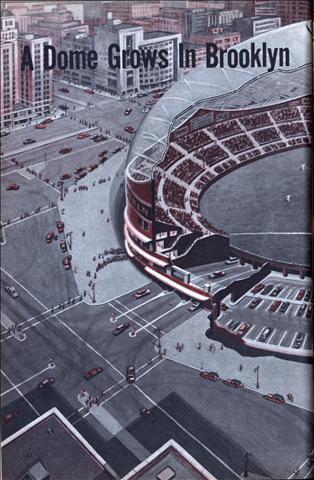 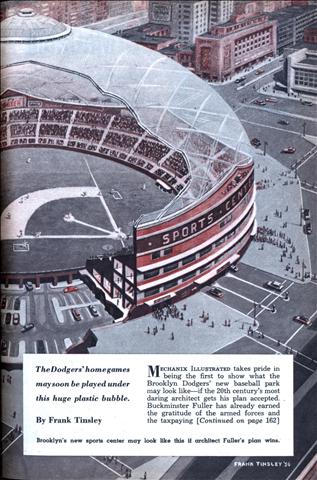 A Dome Grows in Brooklyn

The Dodgers’ home games may soon be played under this huge plastic bubble.

Mechanix Illustrated takes pride in being the first to show what the Brooklyn Dodgers’ new baseball park may look like—if the 20th century’s most daring architect gets his plan accepted. Buckminster Fuller has already earned the gratitude of the armed forces and the taxpaying public with his plastic igloos that can be helicopter-toted from air base to air base to serve as hangars, barracks, warehouses, administration buildings. 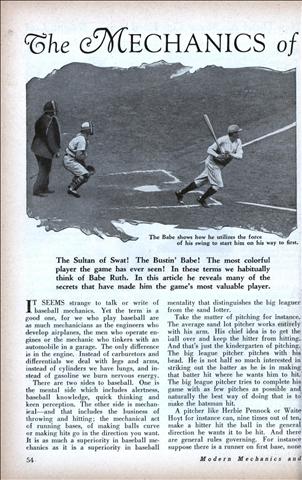 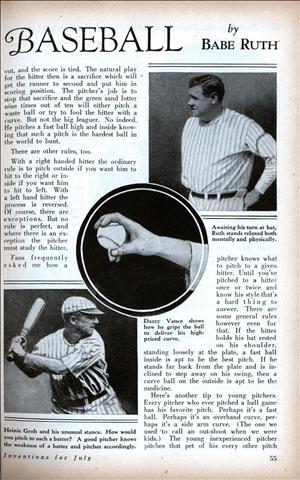 IT SEEMS strange to talk or write of baseball mechanics. Yet the term is a good one, for we who play baseball are as much mechanicians as the engineers who develop airplanes, the men who operate engines or the mechanic who tinkers with an automobile in a garage. The only difference is in the engine.

Popular Mechanics
Issue: May, 1924
Posted in: Sports
Tags: baseball
No Comments on How Science Has Aided National Game (May, 1924)

How Science Has Aided National Game (May, 1924) 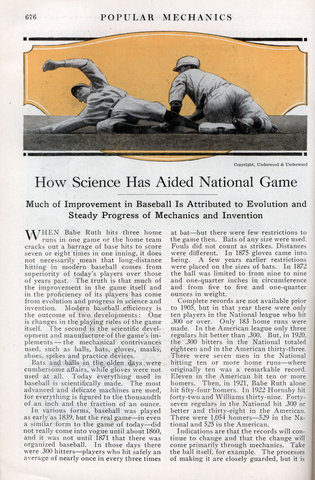 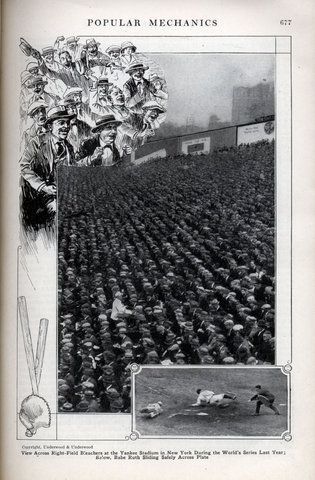 How Science Has Aided National Game

Much of Improvement in Baseball Is Attributed to Evolution and Steady Progress of Mechanics and Invention WHEN Babe Ruth hits three home runs in one game or the home team cracks out a barrage of base hits to score seven or eight times in one inning, it does not necessarily mean that long-distance hitting in modern baseball comes from superiority of today’s players over those of years past. 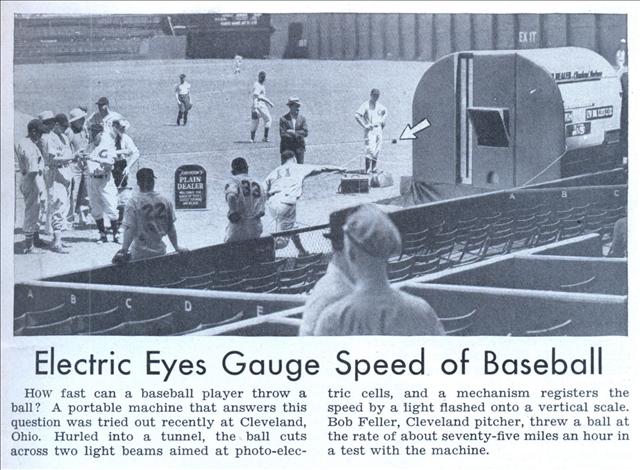 How fast can a baseball player throw a ball? A portable machine that answers this question was tried out recently at Cleveland, Ohio. Hurled into a tunnel, the ball cuts across two light beams aimed at photo-electric cells, and a mechanism registers the speed by a light flashed onto a vertical scale. Bob Feller, Cleveland pitcher, threw a ball at the rate of about seventy-five miles an hour in a test with the machine.

GENERAL JACQUES, of the Belgian army, received a lesson in batting from an expert during his stay in America, when Babe Ruth showed the famous soldier how to “line ’em out.” The Babe demonstrated where to meet the ball, how to stand at the plate, and how to swing.

The general proved to be an apt pupil for a man who had never had his hands on a baseball, and is said to have knocked out a couple of creditable hits. His lessons in batting, however, were not extensive enough to put him in the home run class.

Remember, it would be inappropriate to watch television wearing anything less than your Sunday best. 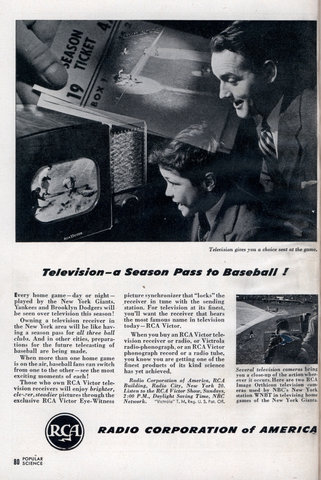 Television – a Season Pass to Baseball!

Every home game â€”day or night â€” played by the New York Giants, Yankees and Brooklyn Dodgers will be seen over television this season!

Owning a television receiver in the New York area will be like having a season pass for all three ball clubs. And in other cities, preparations for the future telecasting of baseball are being made. 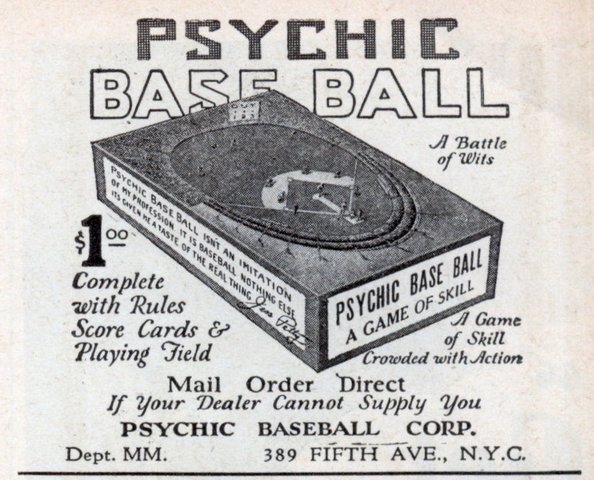 A Battle of Wits

A Game of Skill Crowded with Action

Mail Order Direct If Your Dealer Cannot Supply You 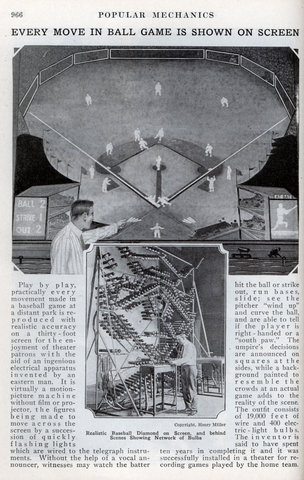 EVERY MOVE IN BALL GAME IS SHOWN ON SCREEN

Play by play, practically every movement made in a baseball game at a distant park is reproduced with realistic accuracy on a thirty-foot screen for the enjoyment of theater patrons with the aid of an ingenious electrical apparatus invented by an eastern man. It is virtually a motion-picture machine without film or projector, the figures being made to move across the screen by a succession of quickly flashing lights which are wired to the telegraph instruments.

Modern Mechanix
Issue: May, 1938
Posted in: Impractical
Tags: baseball
No Comments on Mirror Teaches Batting (May, 1938) 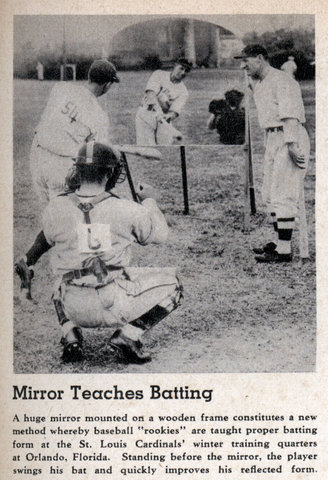 A huge mirror mounted on a wooden frame constitutes a new method whereby baseball “rookies” are taught proper batting form at the St. Louis Cardinals’ winter training quarters at Orlando, Florida. Standing before the mirror, the player swings his bat and quickly improves his reflected form.