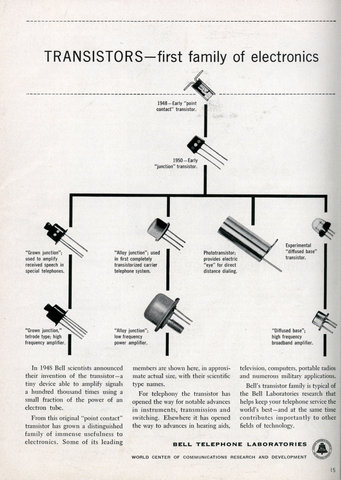 In 1948 Bell scientists announced their invention of the transistorâ€”a tiny device able to amplify signals a hundred thousand times using a small fraction of the power of an electron tube.

From this original “point contact” transistor has grown a distinguished family of immense usefulness to electronics. Some of its leading members are shown here, in approximate actual size, with their scientific type names.

Popular Science
Issue: May, 1939
Posted in: Advertisements, Telephone
Tags: Bell Telphone
11 Comments on “Ever Seen Your Telephone Switchboard?” (May, 1939)

This is pretty damn cool. I would have loved to take a tour of my local switchboard. 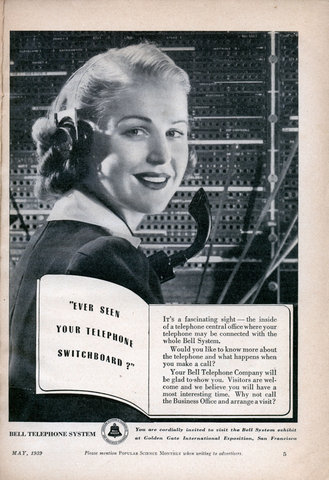 “Ever Seen Your Telephone Switchboard?”

It’s a fascinating sight â€” the inside of a telephone central office where your telephone may be connected with the whole Bell System.

Would you like to know more about the telephone and what happens when you make a call?

Your Bell Telephone Company will be glad to show you. Visitors are welcome and we believe you will have a most interesting time. Why not call the Business Office and arrange a visit? 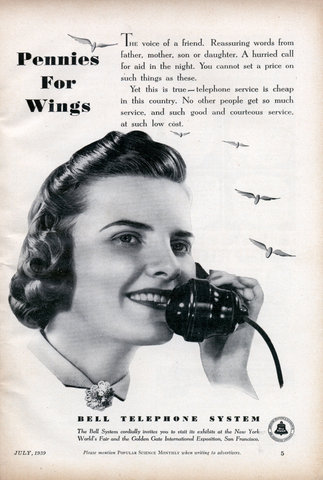 The voice of a friend. Reassuring words from father, mother, son or daughter. A hurried call for aid in the night. You cannot set a price on
such things as these.

Yet this is true â€” telephone service is cheap in this country. No other people get so much service, and such good and courteous service, at such low cost. 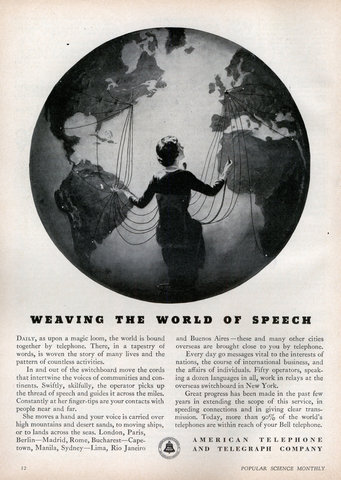 WEAVING THE WORLD OF SPEECH

Daily, as upon a magic loom, the world is bound together by telephone. There, in a tapestry of words, is woven the story of many lives and the pattern of countless activities.

In and out of the switchboard move the cords that intertwine the voices of communities and continents. Swiftly, skilfully, the operator picks up the thread of speech and guides it across the miles. Constantly at her finger-tips are your contacts with people near and far. 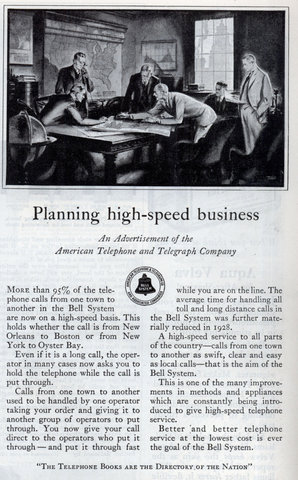 More than 95% of the telephone calls from one town to another in the Bell System are now on a high-speed basis. This holds whether the call is from New Orleans to Boston or from New York to Oyster Bay.

Even if it is a long call, the operator in many cases now asks you to hold the telephone while the call is put through.

This is back when Ma Bell was a proud monopoly. “One Policy, One System, Universal Service”. I’m starting to think that Tolkien lifted his whole “one ring” idea from AT&T. 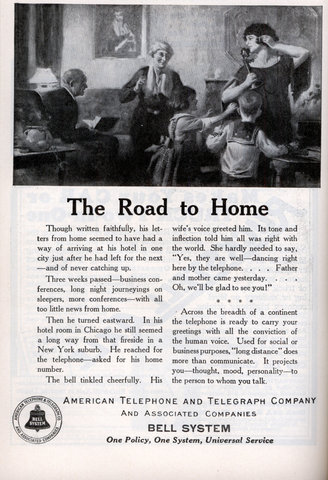 The Road to Home

Though written faithfully, his letters from home seemed to have had a way of arriving at his hotel in one city just after he had left for the next â€”and of never catching up.

Then he turned eastward. In his hotel room in Chicago he still seemed a long way from that fireside in a New York suburb. He reached for the telephoneâ€”asked for his home number. 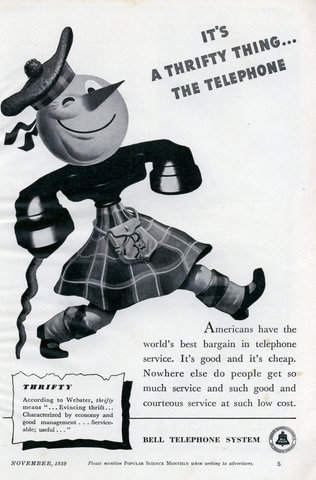 It’s a Thrifty Thing… the Telephone

Americans have the world’s best bargain in telephone service. It’s good and it’s cheap. Nowhere else do people get so much service and such good and courteous service at such low cost. 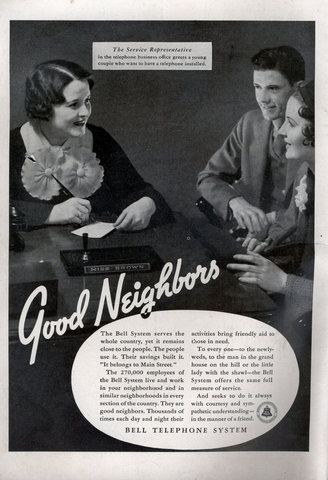 Good Neighbors
The Bell System serves the whole country, yet it remains close to the people. The people use it. Their savings built it. “It belongs to Main Street.”

The 270,000 employees of the Bell System live and work in your neighborhood and in similar neighborhoods in every section of the country. They are good neighbors. Thousands of times each day and night their activities bring friendly aid to those in need. 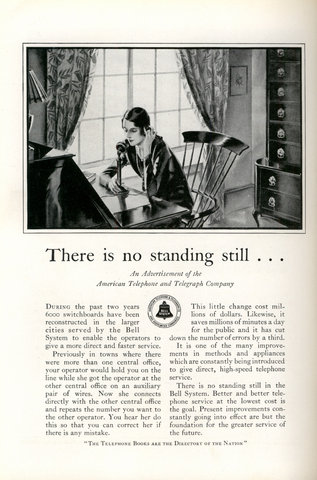 During the past two years 6000 switchboards have been reconstructed in the larger cities served by the Bell System to enable the operators to give a more direct and faster service. Previously in towns where there were more than one central office, your operator would hold you on the line while she got the operator at the other central office on an auxiliary pair of wires. Now she connects directly with the other central office and repeats the number you want to the other operator. You hear her do this so that you can correct her if there is any mistake.

This certainly seems like a pain in the ass way to make a transistor. 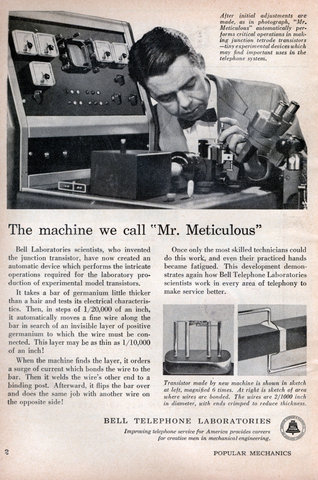 The machine we call “Mr. Meticulous”

Bell Laboratories scientists, who invented the junction transistor, have now created an automatic device which performs the intricate operations required for the laboratory production of experimental model transistors.

It takes a bar of germanium little thicker than a hair and tests its electrical characteristics. Then, in steps of 1/20,000 of an inch, it automatically moves a fine wire along the bar in search of an invisible layer of positive germanium to which the wire must be connected. This layer may be as thin as 1/10,000 of an inch!