BULLET BOUNCER ON CAR SAVES POLICE FROM THUGS
Bullet bouncers are now in use on cars of the San Francisco, Calif., police department to protect members of radio patrol crews from the gunfire of thugs. The contrivances are sheets of quarter-inch-thick steel plate, equipped with shuttered windows and hinged to the top of the windshield frame.

There is a Facebook photo album about this car. Anyway, according to the caption the car did not prevent the Governor from being deposed by Chiang Kaishek and assassinated by the Japanese. 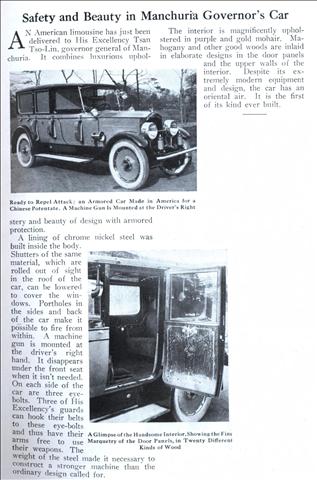 AN American limousine has just been delivered to His Excellency Tsan Tso-Lin, governor general of Manchuria. It combines luxurious upholstery and beauty of design with armored protection.

A lining of chrome nickel steel was built inside the body. Shutters of the same material, which are rolled out of sight in the roof of the car, can be lowered to cover the windows. Portholes in the sides and back of the car make it possible to fire from within. 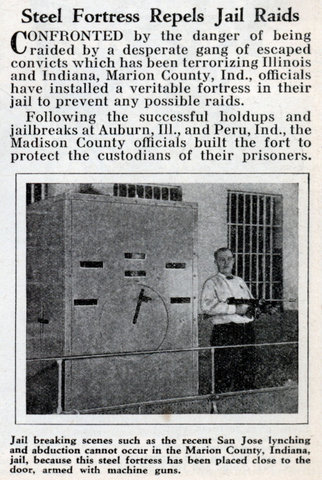 CONFRONTED by the danger of being raided by a desperate gang of escaped convicts which has been terrorizing Illinois and Indiana, Marion County, Ind., officials have installed a veritable fortress in their jail to prevent any possible raids.

Following the successful holdups and jailbreaks at Auburn, III., and Peru, Ind., the Madison County officials built the fort to protect the custodians of their prisoners. 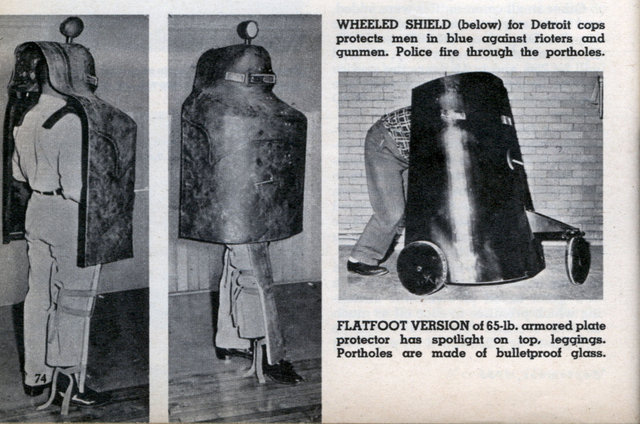 WHEELED SHIELD (below) for Detroit cops protects men in blue against rioters and gunmen. Police fire through the portholes.

FLATFOOT VERSION of 65-lb. armored plate protector has spotlight on top, leggings. Portholes are made of bulletproof glass.