SIXTY-FOOT BUS TO CARRY VISITORS AT WORLD’S FAIR
Sixty feet long, but able to turn in its own length, is a bus designed to carry visitors about the grounds at the Chicago World’s Fair, next year. Of a semi-trailer type, it will accommodate fifty seated passengers and forty-five standing. A fleet of sixty of the machines has been ordered at a cost of $300,000. Two of them are already in use at the fair grounds and another will soon start on a tour of the country, carrying a miniature reproduction of the World’s Fair as it will appear when ready to be opened to the public. The tour will be for the purpose of advertising the big attraction.

American Magazine
Issue: Dec, 1936
Posted in: Advertisements
Tags: buses, Greyhound
3 Comments on GET OUT (of the frigid zone) AND GET UNDER THE SUN (Dec, 1936)

GET OUT (of the frigid zone) AND GET UNDER THE SUN

THE COST: Lowest of all!
THE REWARD: A grand trip, scenic enjoyment, glowing health!

Make this winter out from the cheerless, chilly ones of other years. Acquire a radiant sun tan on the warm sands of Florida, the Gulf Coast or California. Do it on the most modest income, at little more cost than staying home!

I’m not really sure what the point of this photo is. Why are we comparing the size of a bus to a plane? The bus is pretty nifty looking though. The front kind of looks like a Darth Vader helmet. Or I’ve been playing way too much SWTOR lately. Probably the latter.

World’s First Motor Coach Sleeper Compared with Huge Monoplane
THE world’s first motor coach sleeper has been completed with accommodations for twenty-six sleepers. There are upper and lower berths similar to those of an elaborately fitted Pullman car. The sleeper was taken to an airfield for comparison in size with the Ford monoplane. 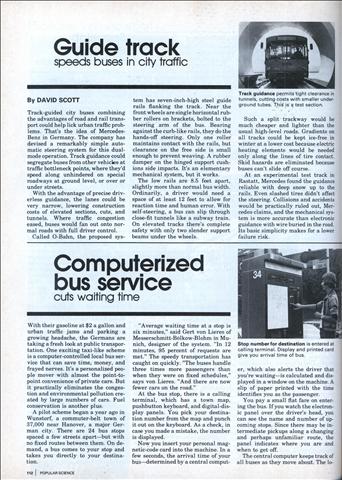 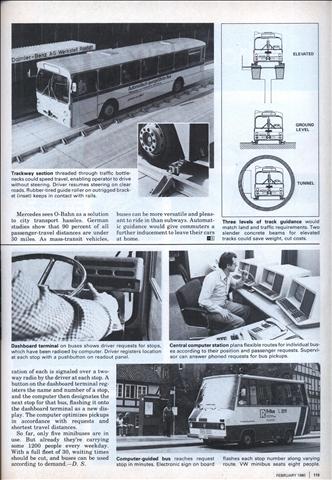 Track-guided city buses combining the advantages of road and rail transport could help lick urban traffic problems. That’s the idea of Mercedes-Benz in Germany. The company has devised a remarkably simple automatic steering system for this dual-mode operation. Track guidance could segregate buses from other vehicles at traffic bottleneck points, where they’d speed along unhindered on special roadways at ground level, or over or under streets.

This modern version of the old-time huckster who hawked his farm produce from door to door has been put in operation by Morton Salter in Los Angeles residential streets. The traveling grocery store is a converted bus with all the fittings of a busy, modern market, and follows a regular route. 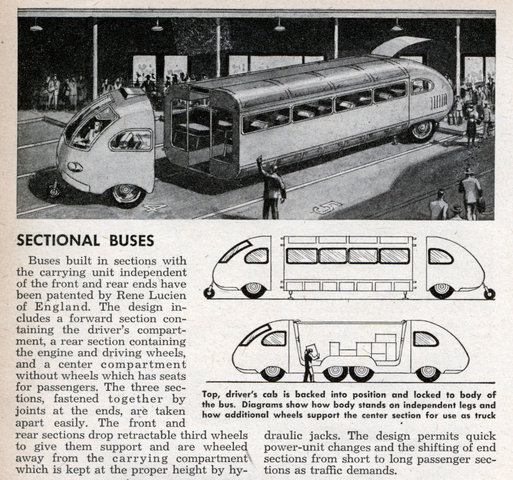 SECTIONAL BUSES
Buses built in sections with the carrying unit independent of the front and rear ends have been patented by Rene Lucien of England. The design includes a forward section containing the driver’s compartment, a rear section containing the engine and driving wheels, and a center compartment without wheels which has seats for passengers. The three sections, fastened together by joints at the ends, are taken apart easily.