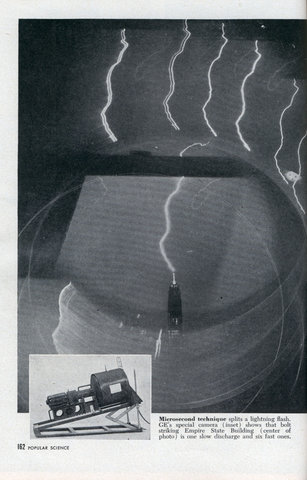 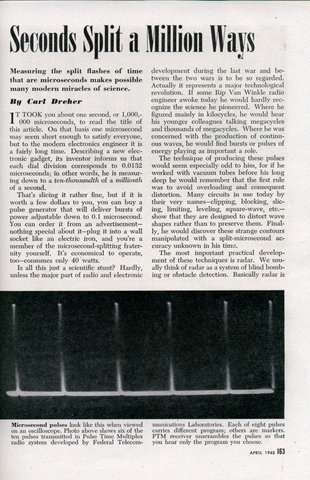 Measuring the split flashes of time that are microseconds makes possible many modern miracles of science.

IT TOOK you about one second, or 1,000,-000 microseconds, to read the title of this article. On that basis one microsecond may seem short enough to satisfy everyone, but to the modern electronics engineer it is a fairly long time. Describing a new electronic gadget, its inventor informs us that each dial division corresponds to 0.0132 microseconds; in other words, he is measuring down to a ten-thousandth of a millionth of a second.

That’s slicing it rather fine, but if it is worth a few dollars to you, you can buy a pulse generator that will deliver bursts of power adjustable down to 0.1 microsecond. You can order it from an advertisement-nothing special about itâ€”plug it into a wall socket like an electric iron, and you’re a member of the microsecond-splitting fraternity yourself. It’s economical to operate, tooâ€”consumes only 40 watts. 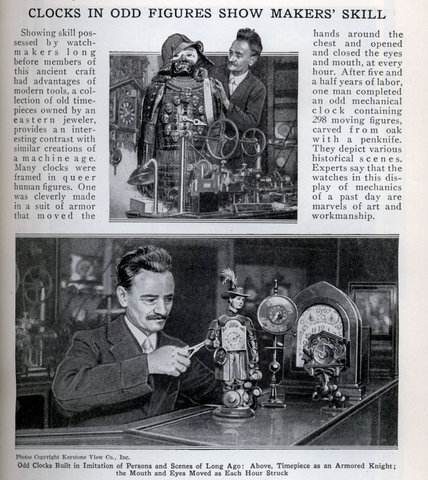 Showing skill possessed by watch-makers long before members of this ancient craft had advantages of modern tools, a collection of old timepieces owned by an eastern jeweler, provides a n interesting contrast with similar creations of a machine age. Many clocks were framed in queer human figures.

So, that woman took her electric toaster/heater into the shower? Not too bright. 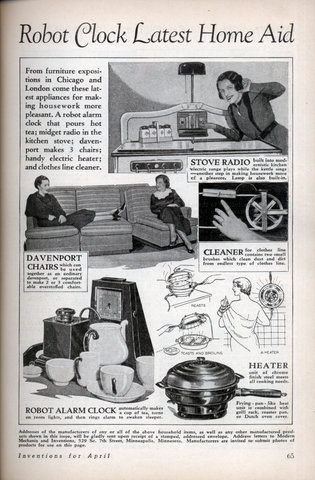 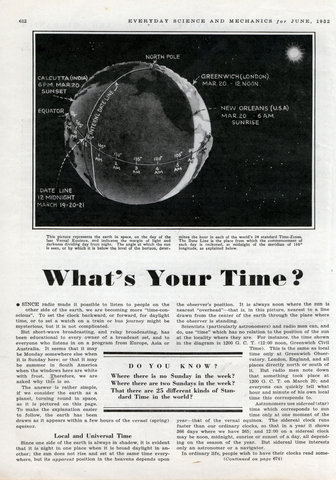 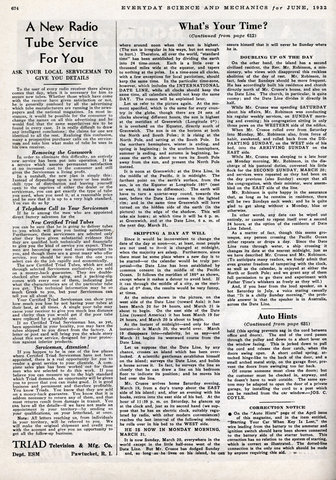 USE PHONOGRAPH AS AN ALARM CLOCK
A novel attachment for the phonograph by which a heavy sleeper may be aroused at any hour he wishes by soft music, was recently shown in London, England. The alarm-clock device is set at the desired hour, and wound. A brake on the turntable of the phonograph is released at the set hour by a slight pull from the alarm key of the clock. 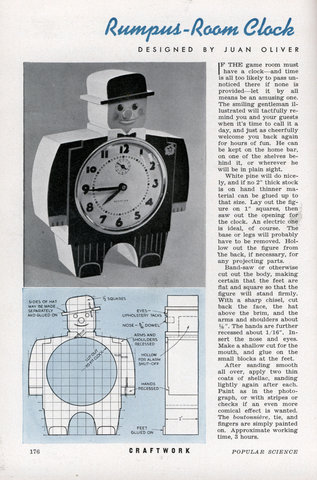 Rumpus-Room Clock
DESIGNED BY JUAN OLIVER
IF THE game room must have a clockâ€”and time is all too likely to pass unnoticed there if none is providedâ€”let it by all means be an amusing one. The smiling gentleman illustrated will tactfully remind you and your guests when it’s time to call it a day, and just as cheerfully welcome you back again for hours of fun. He can be kept on the home bar, on one of the shelves behind it, or wherever he will be in plain sight. 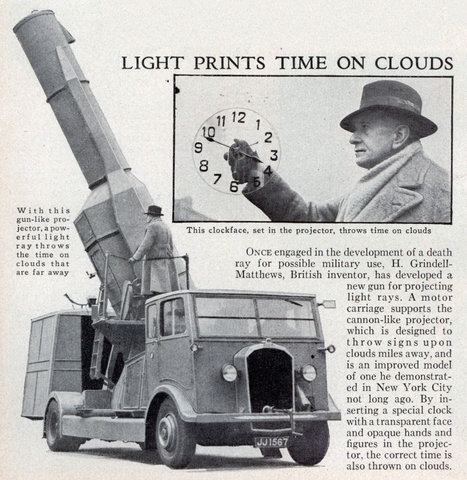 Once engaged in the development of a death ray for possible military use, H. Grindell-Matthews, British inventor, has developed a new gun for projecting light rays. A motor carriage supports the cannon-like projector, which is designed to throw signs upon clouds miles away, and is an improved model of one he demonstrated in New York City not long ago. By inserting a special clock with a transparent face and opaque hands and figures in the projector, the correct time is also thrown on clouds.