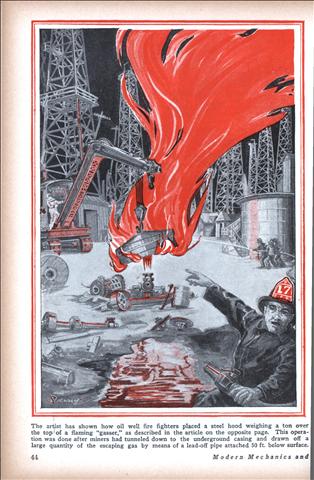 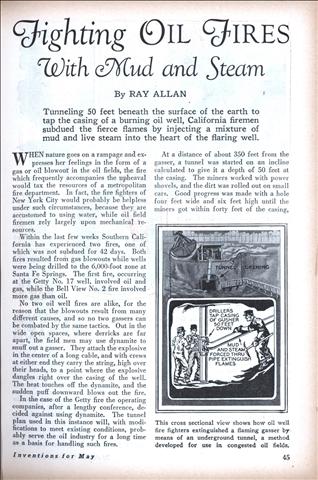 WHEN nature goes on a rampage and expresses her feelings in the form of a gas or oil blowout in the oil fields, the fire which frequently accompanies the upheaval would tax the resources of a metropolitan fire department. 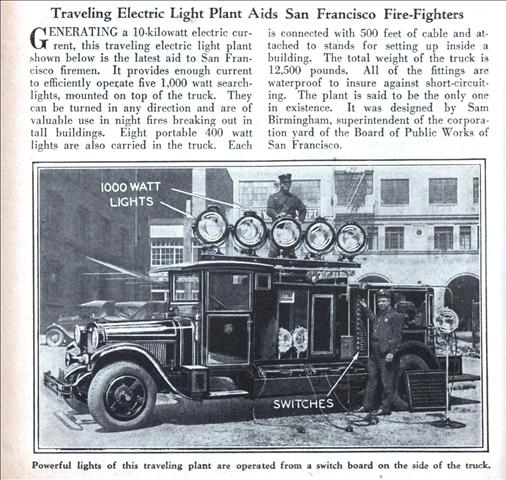 GENERATING a 10-kilowatt electric current, this traveling electric light plant shown below is the latest aid to San Francisco firemen. It provides enough current to efficiently operate five 1,000 watt searchlights, mounted on top of the truck. They can be turned in any direction and are of valuable use in night fires breaking out in tall buildings.

Novel Portland, Ore., Fire Station Looks Like a Residence (May, 1931)

The current address of the building is 2200  NE 24th avenue and is now a non-profit agency called Metropolitan Family Service. Engine 18 is in the middle of renovating their current station right now. 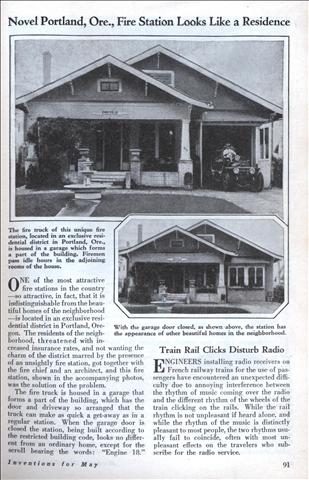 Novel Portland, Ore., Fire Station Looks Like a Residence
ONE of the most attractive fire stations in the country —so attractive, in fact, that it is indistinguishable from the beautiful homes of the neighborhood —is located in an exclusive residential district in Portland, Oregon. The residents of the neighborhood, threatened with increased insurance rates, and not wanting the charm of the district marred by the presence of an unsightly fire station, got together with the fire chief and an architect, and this fire station, shown in the accompanying photos, was the solution of the problem. 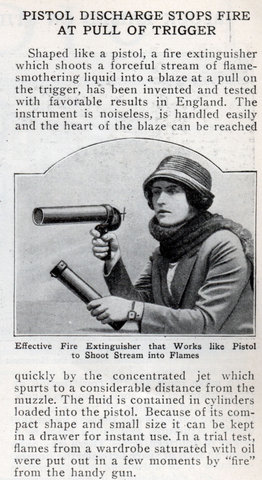 Shaped like a pistol, a fire extinguisher which shoots a forceful stream of flame-smothering liquid into a blaze at a pull on the trigger, has been invented and tested with favorable results in England. The instrument is noiseless, is handled easily and the heart of the blaze can be reached quickly by the concentrated jet which spurts to a considerable distance from the muzzle. The fluid is contained in cylinders loaded into the pistol. Because of its compact shape and small size it can be kept in a drawer for instant use. In a trial test, flames from a wardrobe saturated with oil were put out in a few moments by “fire” from the handy gun. 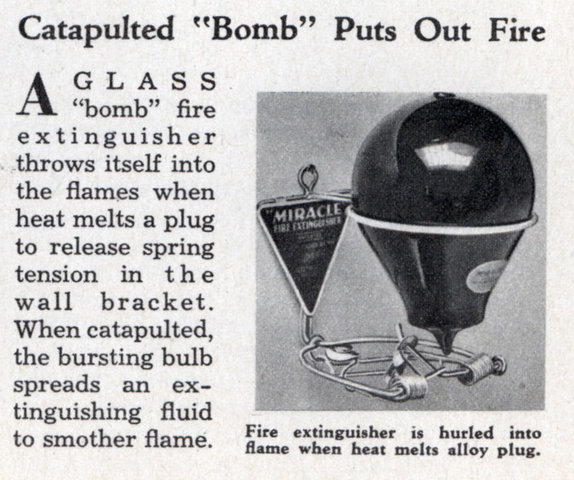 A GLASS “bomb” fire extinguisher throws itself into the flames when heat melts a plug to release spring tension in the wall bracket. When catapulted, the bursting bulb spreads an extinguishing fluid to smother flame. 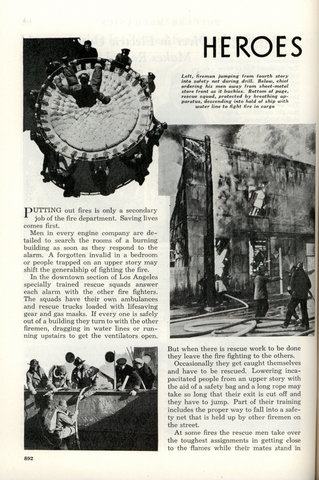 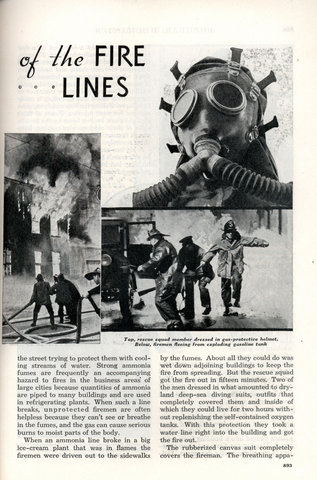 HEROES of the Fire Lines

PUTTING out fires is only a secondary job of the fire department. Saving lives comes first.

Men in every engine company are detailed to search the rooms of a burning building as soon as they respond to the alarm. A forgotten invalid in a bedroom or people trapped on an upper story may shift the generalship of fighting the fire.

In the downtown section of Los Angeles specially trained rescue squads answer each alarm with the other fire fighters. The squads have their own ambulances and rescue trucks loaded with lifesaving gear and gas masks. If every one is safely out of a building they turn to with the other firemen, dragging in water lines or running upstairs to get the ventilators open. 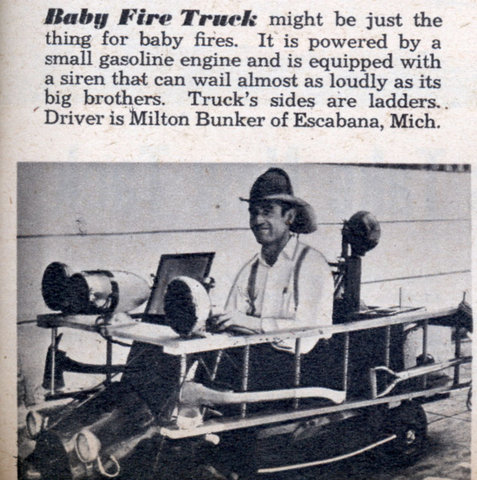 Baby Fire Truck might be just the thing for baby fires. It is powered by a small gasoline engine and is equipped with a siren that can wail almost as loudly as its big brothers. Truck’s sides are ladders,. Driver is Milton Bunker of Escabana, Mich. 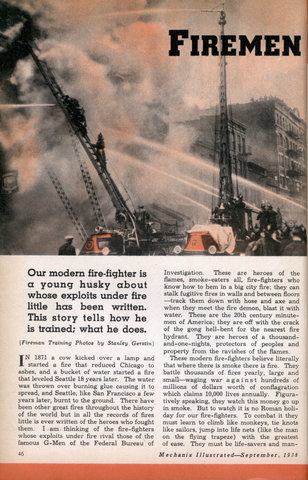 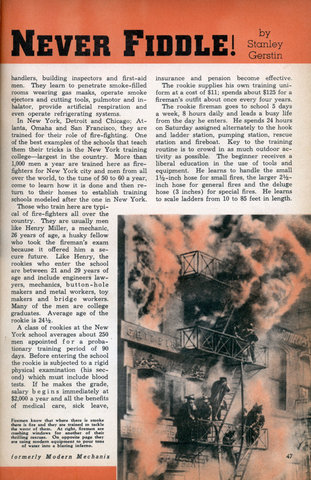 Our modern fire-fighter is a young husky about whose exploits under fire little has been written. This story tells how he is trained; what he does.

IN 1871 a cow kicked over a lamp and started a fire that reduced Chicago to ashes, and a bucket of water started a fire that leveled Seattle 18 years later. The water was thrown over burning glue causing it to spread, and Seattle, like San Francisco a few years later, burnt to the ground. There have been other great fires throughout the history of the world but in all the records of fires little is ever written of the heroes who fought them. I am thinking of the fire-fighters whose exploits under fire rival those of the famous G-Men of the Federal Bureau of Investigation. These are heroes of the flames, smoke-eaters all, fire-fighters who know how to hem in a big city fire; they can stalk fugitive fires in walls and between floors â€”track them down with hose and axe and when they meet the fire demon, blast it with water. These are the 20th century minute-men of America; they are off with the crack of the gong hell-bent for the nearest fire hydrant. They are heroes of a thousand-and-one-nights, protectors of peoples and property from the ravishes of the flames. 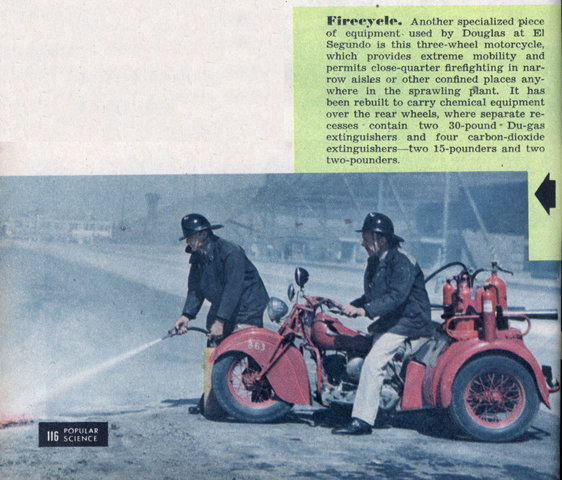 Firecycle. Another specialized piece of equipment used by Douglas at El Segundo is this three-wheel motorcycle, which provides extreme mobility and permits close-quarter firefighting in narrow aisles or other confined places anywhere in the sprawling plant. It has been rebuilt to carry chemical equipment over the rear wheels, where separate recesses contain two 30-pound Du-gas extinguishers and four carbon-dioxide extinguishersâ€”two 15-pounders and two two-pounders.