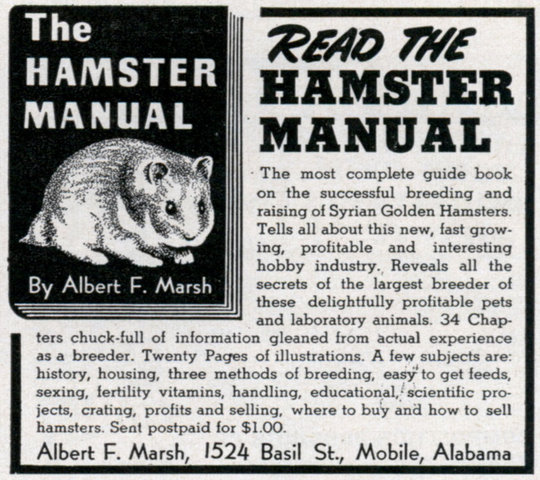 The most complete guide book on the successful breeding and raising of Syrian Golden Hamsters. Tells all about this new, fast growing, profitable and interesting hobby industry. Reveals all the secrets of the largest breeder of these delightfully profitable pets and laboratory animals. 34 Chapters chuck-full of information gleaned from actual experience as a breeder. Twenty Pages of illustrations. A few subjects are: history, housing, three methods of breeding, easy to get feeds, sexing, fertility vitamins, handling, educational, scientific projects, crating, profits and selling, where to buy and how to sell hamsters. Sent postpaid for $1.00.

There has been some question as to whether hamsters are in fact from Syria. The answer is, that the most popular breeds are. A little more info from Hamster Hideout:

Syrian hamsters are probably the most common domesticated hamster. All Syrian hamsters in captivity are believed to be descended from a mother and her 12 cubs who were dug out of a burrow near Syria, in 1930.

Adult hamsters can grow up to 18cm in length. with females being slightly larger than the males. Adults are fiercely territorial and should be housed individually due to the frequent and fierce fighting with other hamsters.

Since Syrian hamsters are bigger than the other species, they can cope with more handling before they get tired. They also seem to be more responsive to what is going on around them.

The Syrian hamster is also known commonly as the golden hamster, although today’s advance breeding techniques have developed more than 40 different colour types.