Like some action in your movies? Mount your camera on the POV (Point-of-View) helmet professional stunt men use. While you’re skiing, cycling, or mountain climbing, a visor frame tells you what you’re shooting—hands free. $130. Gilbert-Waugh Productions, 3518 Cahuenga Blvd., W. Hollywood, Calif. 90068.

A new style of goggles with transparent cups enables the wearer to look sideways as well as forward, removing the feeling of wearing blinders and the temptation to risk eye injury by leaving the goggles off.

The unbreakable cups are large enough to be used over spectacles, as illustrated, avoiding the need of a special type for workers who wear glasses. 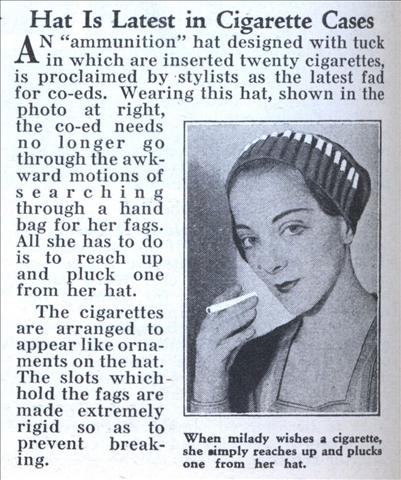 Hat Is Latest in Cigarette Cases

AN “ammunition” hat designed with tuck in which are inserted twenty cigarettes, is proclaimed by stylists as the latest fad for co-eds. Wearing this hat, shown in the photo at right, the co-ed needs no longer go through the awkward motions of searching through a hand bag for her fags. All she has to do is to reach up and pluck one from her hat.

The cigarettes are arranged to appear like ornaments on the hat. The slots which hold the fags are made extremely rigid so as to prevent breaking. 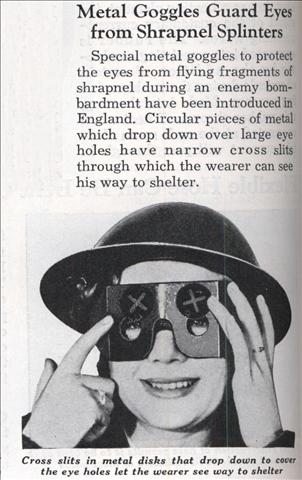 Special metal goggles to protect the eyes from flying fragments of shrapnel during an enemy bombardment have been introduced in England. Circular pieces of metal which drop down over large eye holes have narrow cross slits through which the wearer can see his way to shelter.

SINGER CAN HEAR VOICE AS AUDIENCE HEARS IT (Feb, 1934)

SINGER CAN HEAR VOICE AS AUDIENCE HEARS IT

So that would-be singers may hear themselves as others hear them, a Los Angeles, Calif., voice teacher and former grand opera singer has invented and patented a voice reflector. Fitted around the pupil’s neck like a collar, as shown above, its convolutions carry a part of the singer’s tones back to her own ears. According to the inventor, his device will enable singers or public speakers to detect and correct faults in tone, volume, and diction during a few hours’ practice, since they may hear in this way exactly how their voices in singing or speaking would sound to an audience.

It looks like she’s wearing some sort of bondage mask. 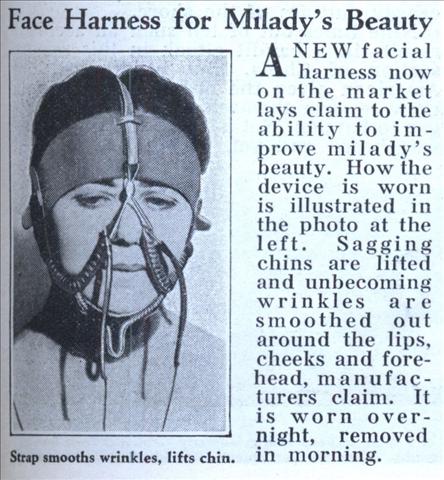 Face Harness for Milady’s Beauty
A NEW facial harness now on the market lays claim to the ability to improve milady’s beauty. How the device is worn is illustrated in the photo at the left. Sagging chins are lifted and unbecoming wrinkles are smoothed out around the lips, cheeks and forehead, manufacturers claim. It is worn overnight, removed in morning.

Popular Science
Issue: May, 1959
Posted in: Radio
Tags: headgear
No Comments on HELMET RADIO (May, 1959) 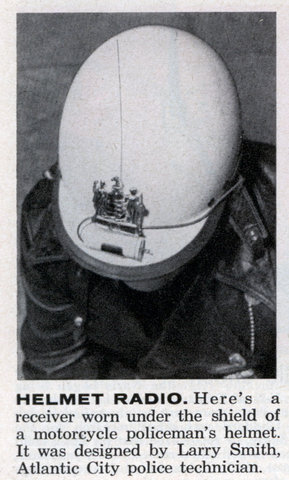 Here’s a receiver worn under the shield of a motorcycle policeman’s helmet. It was designed by Larry Smith, Atlantic City police technician. 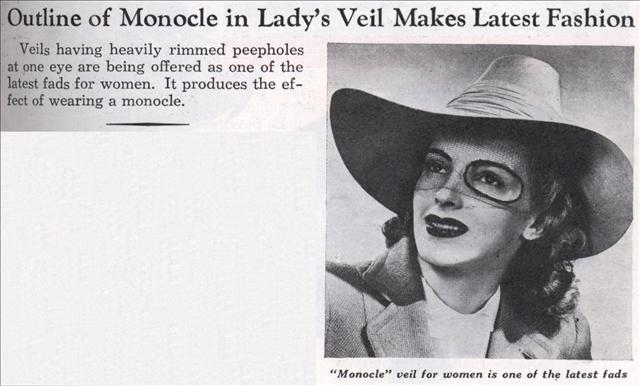 Veils having heavily rimmed peepholes at one eye are being offered as one of the latest fads for women. It produces the effect of wearing a monocle. 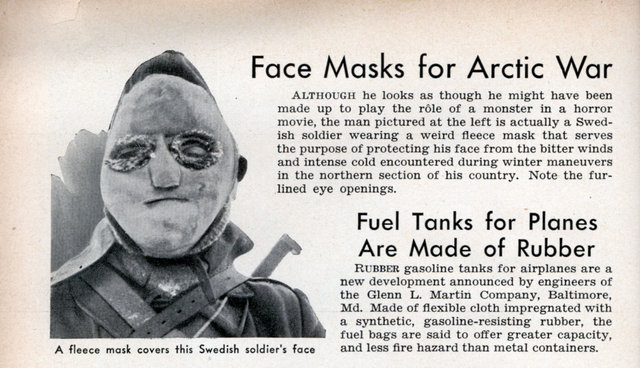 Although he looks as though he might have been made up to play the role of a monster in a horror movie, the man pictured at the left is actually a Swedish soldier wearing a weird fleece mask that serves the purpose of protecting his face from the bitter winds and intense cold encountered during winter maneuvers in the northern section of his country. Note the fur-lined eye openings.

I guess it’s better then being a jock tester.

Sledge-hammer blows are dealt this man by a 13-pound pendulum to find out how much protection a helmet gives a pilot or football player. Instruments measure force of the blows. Result: better-built helmets.