This Helicopter-Car Flies Over Traffic! (Nov, 1941)

This Helicopter-Car Flies Over Traffic!

Ala., got tired of being tied up in traffic jams, so he designed and built this novel flying vehicle. It is a combination of automobile, helicopter, autogiro, and motorcycle. It has two large lifting rotos in a single head, revolving in opposite directions. It is powered by a 40 h.p. motor which is air-cooled. He claims his machine is capable of speeds up to 100 miles an hour. 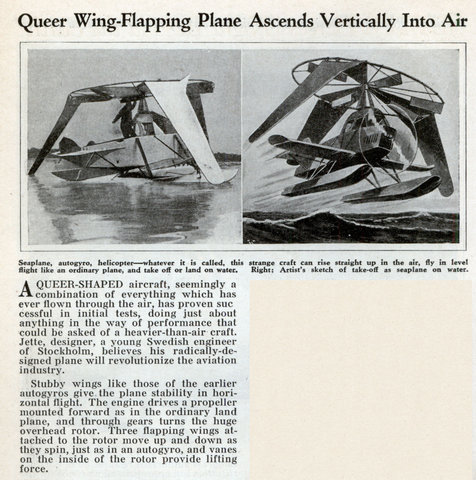 A QUEER-SHAPED aircraft, seemingly a combination of everything which has ever flown through the air, has proven successful in initial tests, doing just about anything in the way of performance that could be asked of a heavier-than-air craft. Jette, designer, a young Swedish engineer of Stockholm, believes his radically-designed plane will revolutionize the aviation industry.

Stubby wings like those of the earlier autogyros give the plane stability in horizontal flight. The engine drives a propeller mounted forward as in the ordinary land plane, and through gears turns the huge overhead rotor. Three flapping wings attached to the rotor move up and down as they spin, just as in an autogyro, and vanes on the inside of the rotor provide lifting force. 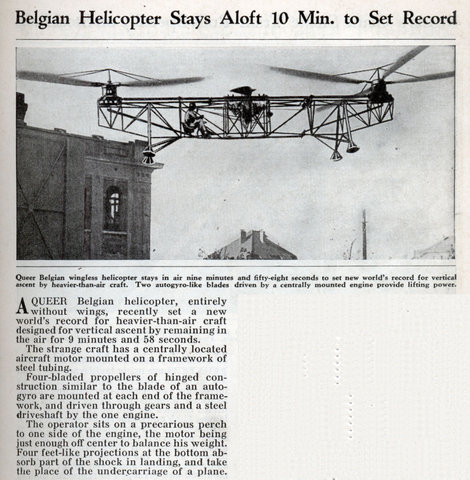 A QUEER Belgian helicopter, entirely without wings, recently set a new world’s record for heavier-than-air craft designed for vertical ascent by remaining in the air for 9 minutes and 58 seconds.

The strange craft has a centrally located aircraft motor mounted on a framework of steel tubing. 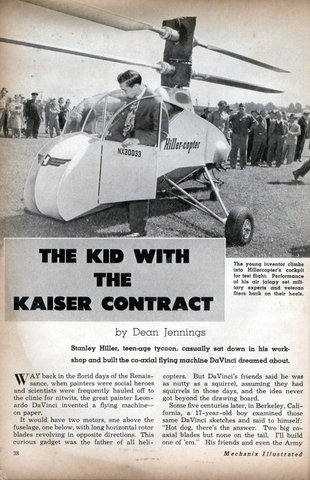 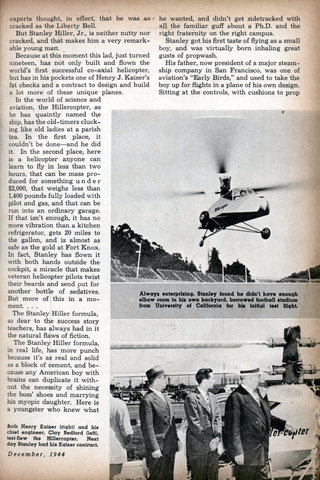 THE KID WITH THE KAISER CONTRACT

Stanley Hiller, teen-age tycoon, casually sat down in his workshop and built the co-axial flying machine Da Vinci dreamed about.

WAY back in the florid days of the Renaissance, when painters were social heroes and scientists were frequently hauled off to the clinic for nitwits, the great painter Leonardo Da Vinci invented a flying machineâ€” on paper.

It would have two motors, one above the fuselage, one below, with long horizontal rotor blades revolving in opposite directions. This curious gadget was the father of all helicopters. But Da Vinci’s friends said he was as nutty as a squirrel, assuming they had squirrels in those days, and the idea never got beyond the drawing board.