From Steam Engines to Robots… The Hierarchies of Robotic Devices (Apr, 1978) 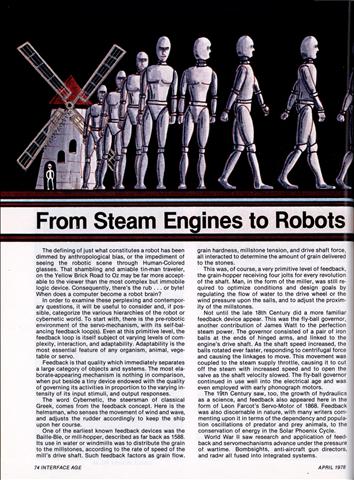 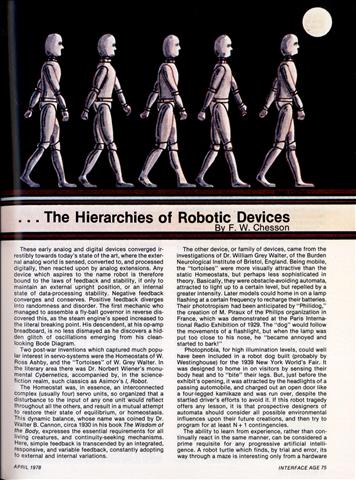 From Steam Engines to Robots… The Hierarchies of Robotic Devices

The defining of just what constitutes a robot has been dimmed by anthropological bias, or the impediment of seeing the robotic scene through Human-Colored glasses. That shambling and amiable tin-man traveler, on the Yellow Brick Road to Oz may be far more acceptable to the viewer than the most complex but immobile logic device. Consequently, there’s the rub … or byte! When does a computer become a robot brain? 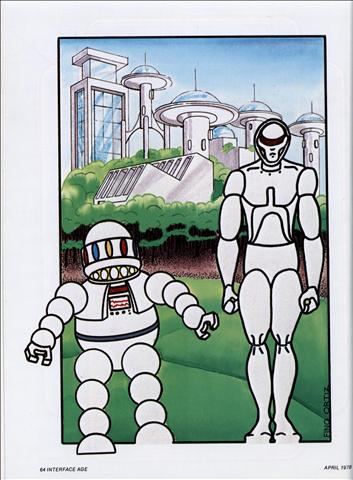 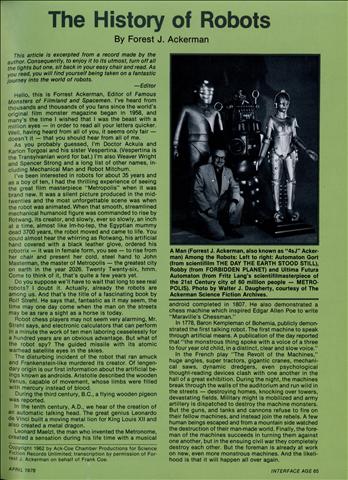 The History of Robots

This article is excerpted from a record made by the author. Consequently, to enjoy it to its utmost, turn off all the lights but one, sit back in your easy chair and read. As you read, you will find yourself being taken on a fantastic journey into the world of robots.
—Editor

Hello, this is Forrest Ackerman, Editor of Famous Monsters of Filmland and Spacemen. I’ve heard from thousands and thousands of you fans since the world’s original film monster magazine began in 1958, and many’s the time I wished that I was the beast with a million eyes — in order to read all your letters quicker. Well, having heard from all of you, it seems only fair — doesn’t it — that you should hear from all of me. 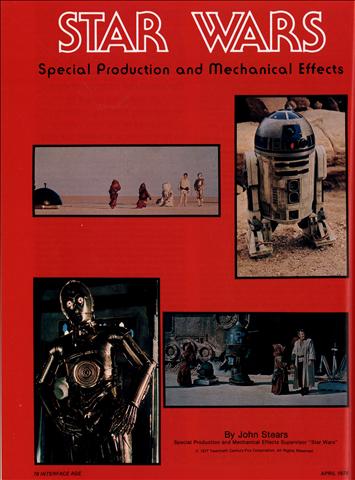 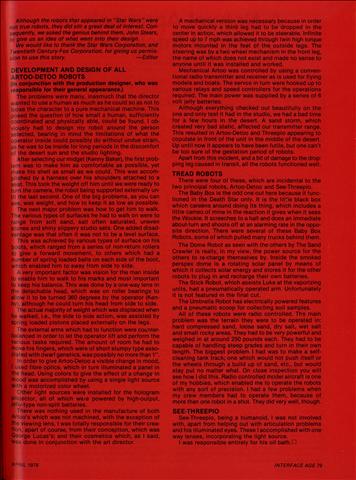 Although the robots that appeared in “Star Wars” were not true robots, they did stir a great deal of interest. Consequently, we asked the genius behind them, John Stears, to give us an idea of what went into their design.

We would like to thank the Star Wars Corporation, and Twentieth Century-Fox Corporation, for giving us permission to use this story. —Editor

DEVELOPMENT AND DESIGN OF ALL ARTOO-DETOO ROBOTS

(In conjunction with the production designer, who was responsible for their general appearance.) The problems were many, inasmuch that the director wanted to use a human as much as he could so as not to loose the character to a pure mechanical machine. 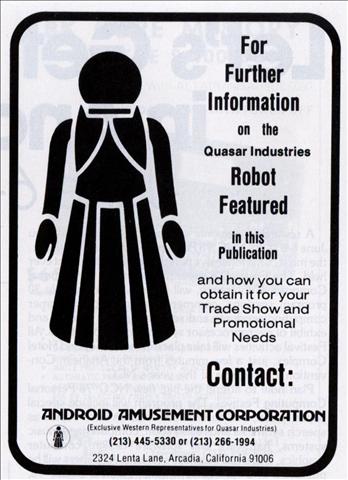 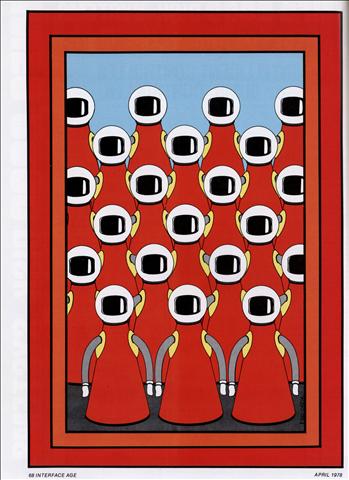 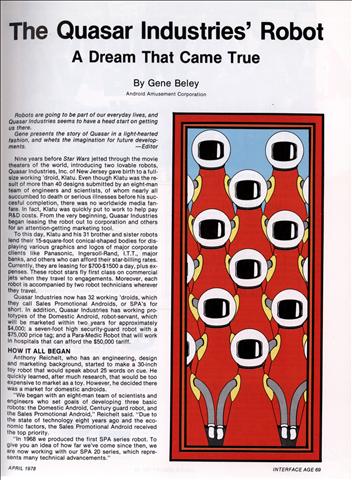 The Quasar Industries’ Robot
A Dream That Came True

Android Amusement Corporation Robots are going to be part of our everyday lives, and Quasar Industries seems to have a head start on getting us there.

Gene presents the story of Quasar in a light-hearted fashion, and whets the imagination for future developments. —Editor Nine years before Star Wars jetted through the movie theaters of the world, introducing two lovable robots, Quasar Industries, Inc. of New Jersey gave birth to a full-size working ‘droid, Klatu. Even though Klatu was the result of more than 40 designs submitted by an eight-man team of engineers and scientists, of whom nearly all succumbed to death or serious illnesses before his successful completion, there was no worldwide media fanfare.

Where Robot Mice And Robot Men Run Round In Robot Towns (Apr, 1978) 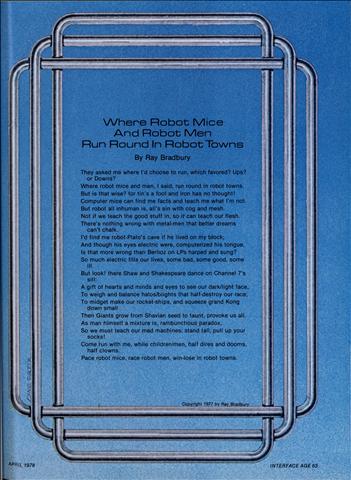 Where Robot Mice And Robot Men Run Round In Robot Towns

They asked me where I’d choose to run, which favored? Ups? or Downs?

Where robot mice and men, I said, run round in robot towns.

But is that wise? for tin’s a fool and iron has no thought!

Computer mice can find me facts and teach me what I’m not.

But robot all inhuman is, all’s sin with cog and mesh.