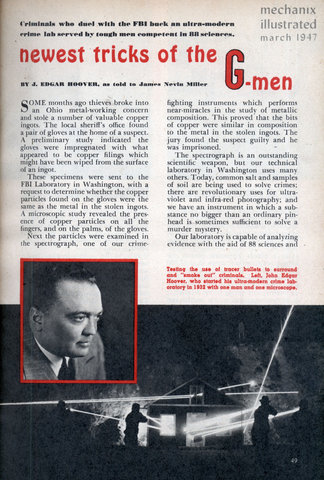 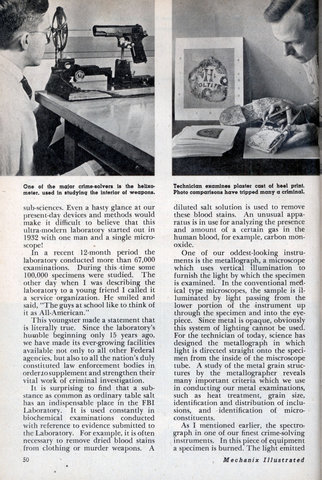 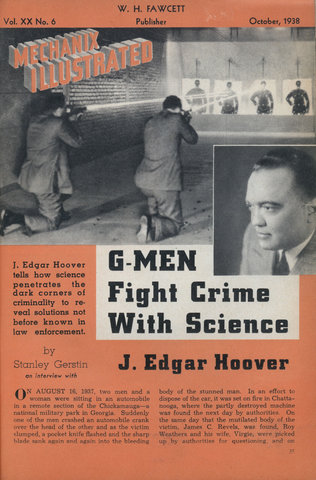 J. Edgar Hoover tells how science penetrates the dark corners of criminality to reveal solutions not before known in law enforcement.

by Stanley Gerstin an interview with J. Edgar Hoover

ON AUGUST 16, 1937, two men and a woman were sitting in an automobile in a remote section of the Chickamauga â€” a national military park in Georgia. Suddenly one of the men crashed an automobile crank over the head of the other and as the victim slumped, a pocket knife flashed and the sharp blade sank again and again into the bleeding body of the stunned man. In an effort to dispose of the car, it was set on fire in Chattanooga, where the partly destroyed machine was found the next day by authorities. On the same day that the mutilated body of the victim, James C. Revels, was found, Roy Weathers and his wife. Virgie, were picked up by authorities for questioning, and on August 21, they admitted the crime which they later repudiated in part. In the subsequent investigation conducted by the Federal Bureau of Investigation, the Bureau’s crime laboratory established that soil picked up at the scene of the murder contained human blood. The clothing of the defendants and the automobile crank were also shown to contain blood and the pocket knife fitted rents in the victim’s clothing. Minute bloodstains were found on parts of the automobile, in spite of its burned condition, and this evidence resulted in the conviction of the defendants.