Modern Mechanix
Issue: May, 1930
Posted in: Sign of the Times
Tags: Africa, Firestone, imperialism, Liberia
1 Comment on Building an Empire In Africa’s Jungles (May, 1930)

Building an Empire In Africa’s Jungles (May, 1930)

I guess it’s not surprising that the article says almost nothing about the native population other than: they are primitives, they like buying stuff at the company store, and that Firestone drove a hard bargain with them. 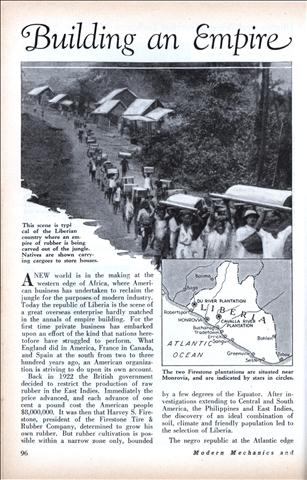 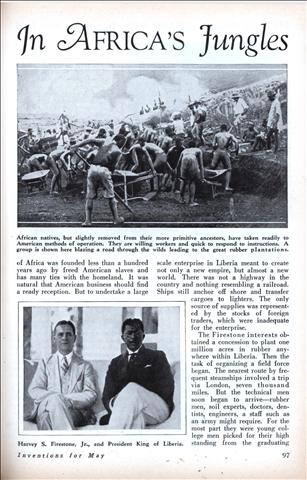 Building an Empire In Africa’s Jungles

A NEW world is in the making at the western edge of Africa, where American business has undertaken to reclaim the jungle for the purposes of modern industry. Today the republic of Liberia is the scene of a great overseas enterprise hardly matched in the annals of empire building. For the first time private business has embarked upon an effort of the kind that nations heretofore have struggled to perform. What England did in America, France in Canada, and Spain at the south from two to three hundred years ago, an American organization is striving to do upon its own account.