Scientific American
Issue: May, 1954
Posted in: Advertisements
Tags: Mallory, nuclear
10 Comments on In a Single Spoon… the power of all the world’s radium (May, 1954)

November 2011 was the sixtieth anniversary of cobalt 60 being first used to treat cancer successfully in a Canadian woman. 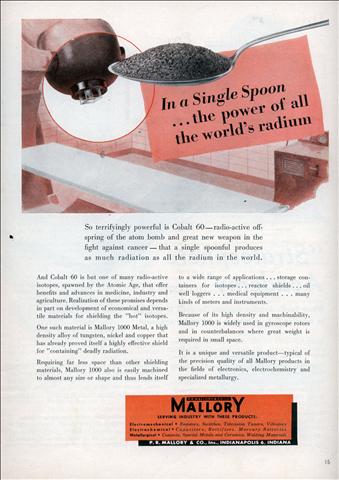 So terrifyingly powerful is Cobalt 60 — radio-active offspring of the atom bomb and great new weapon in the fight against cancer — that a single spoonful produces as much radiation as all the radium in the world.

And Cobalt 60 is but one of many radio-active isotopes, spawned by the Atomic Age, that offer benefits and advances in medicine, industry and agriculture. Realization of these promises depends in part on development of economical and versatile materials for shielding the ffhot” isotopes. 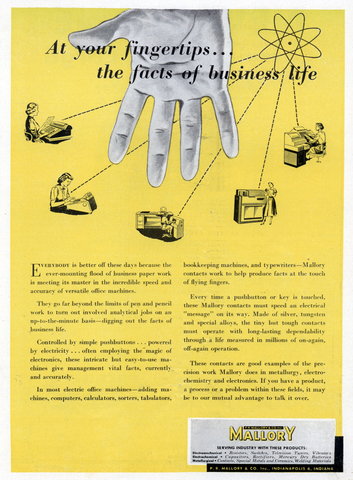 At your fingertips…
the facts of business life

EVERYBODY is better off these days because the ever-mounting flood of business paper work is meeting its master in the incredible speed and accuracy of versatile office machines.
Thej go far bevond the limits of pen and pencil work to turn out invoked analytical jobs on an up-to-the-minute basisâ€”digging out the facts of business life.