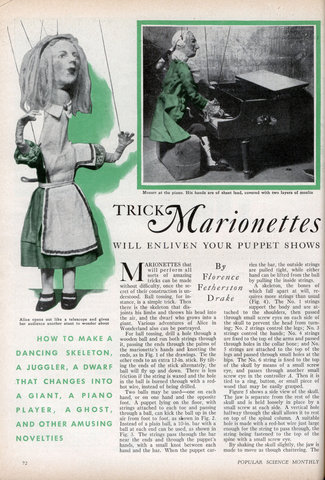 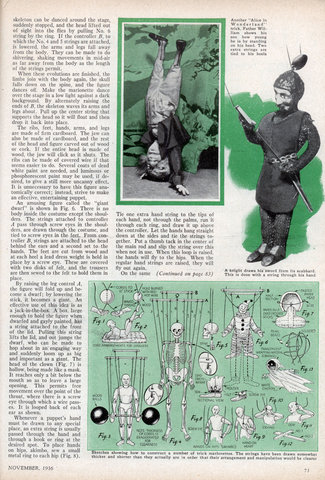 HOW TO MAKE A DANCING SKELETON, A JUGGLER, A DWARF THAT CHANGES INTO A GIANT, A PIANO PLAYER, A GHOST, AND OTHER AMUSING NOVELTIES

MARIONETTES that will perform all sorts of amazing tricks can be made without difficulty, once the secret of their construction is understood. Ball tossing, for instance, is a simple trick. Then there is the skeleton that disjoints his limbs and throws his head into the air, and the dwarf who grows into a giant. Various adventures of Alice in Wonderland also can be portrayed.

For ball tossing, drill a hole through a wooden ball and run both strings through it, passing the ends through the palms of the marionette’s hands and knotting the ends, as in Fig. 1 of the drawings. Tie the other ends to an extra 12-in. stick. By tilting the ends of the stick alternately, the ball will fly up and down. There is less friction if the string is waxed and the hole in the ball is burned through with a red-hot wire, instead of being drilled. 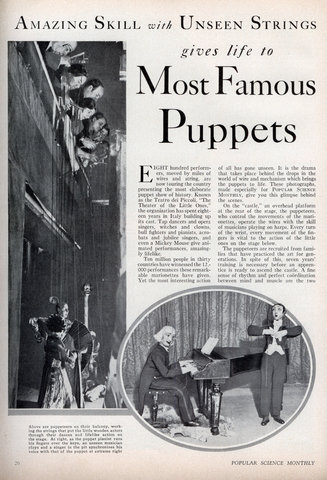 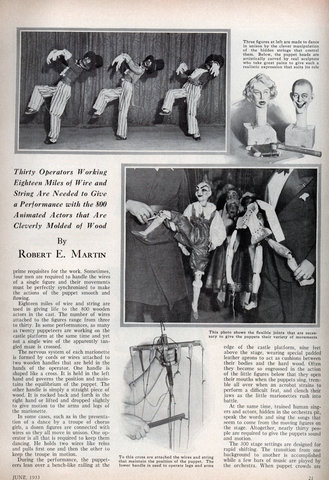 EIGHT hundred performers, moved by miles of wires and string, are now touring the country presenting the most elaborate puppet show of history. Known as the Teatro dei Piccoli, “The Theater of the Little Ones,” the organization has spent eighteen years in Italy building up its cast. Tap dancers and opera singers, witches and clowns, , bull fighters and pianists, acrobats and jubilee singers, and even a Mickey Mouse give animated performances, amazingly lifelike. 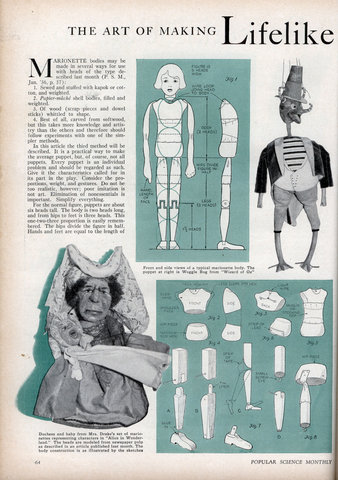 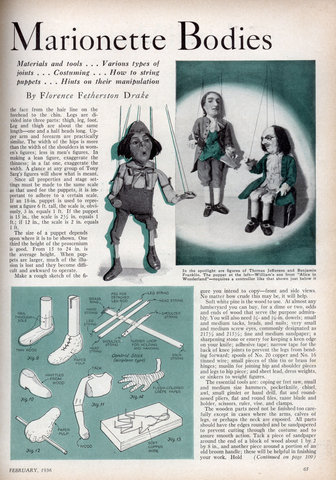 Lifelike MARIONETTE bodies may be made in several ways for use with heads of the type described last month (P. S. M., Jan. ’36, p. 57):

1. Sewed and stuffed with kapok or cotton, and weighted.
2. Papier-mache shell bodies, filled and weighted.
3. Of wood (scrap pieces and dowel sticks) whittled to shape.
4. Best of all, carved from softwood, but this takes more knowledge and artistry than the others and therefore should follow experiments with one of the simpler methods. 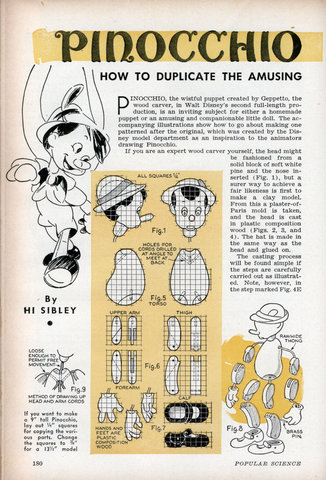 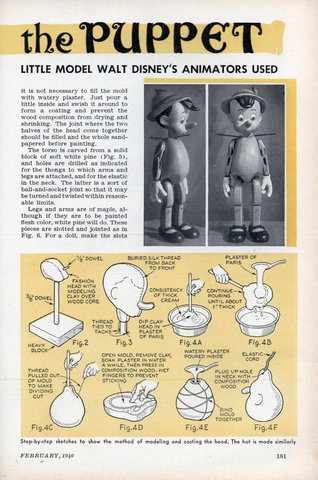 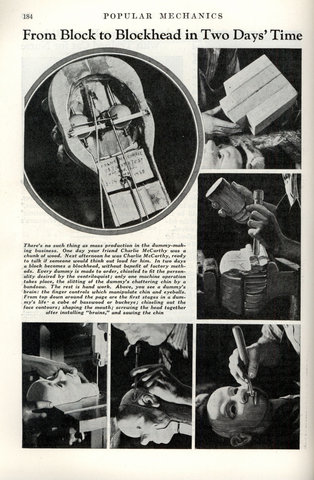 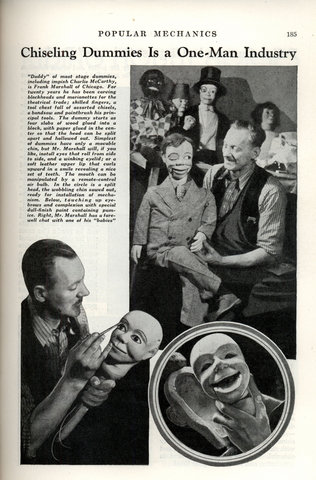 From Block to Blockhead in Two Days’ Time

There’s no such thing as mass production in the dummy-making business. One day your friend Charlie McCarthy was a chunk of wood. Next afternoon he was Charlie McCarthy, ready to talk if someone would think out loud for hint. In two days a block becomes a blockhead, without benefit of factory methods. Every dummy is made to order, chiseled to fit the personality desired by the ventriloquist; only one machine operation takes place, the slitting of the dummy’s chattering chin by a handsaw. The rest is hand work. Above, you see a dummy’s brain: the finger controls which manipulate chin and eyeballs. From top down around the page are the first stages in a dummy’s life a cube of basswood or buckeye; chiseling out the face contours; shaping the mouth; screwing the head together after installing “brains,” and sawing the chin. 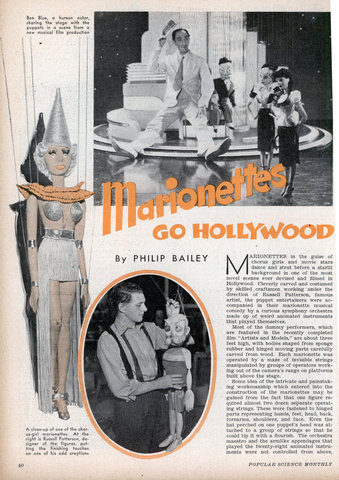 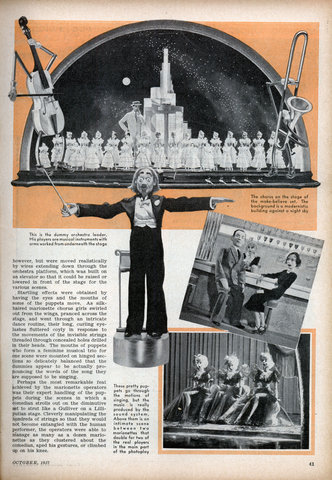 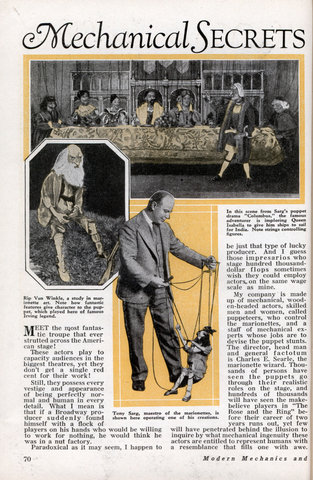 You can view the first part of this series here. 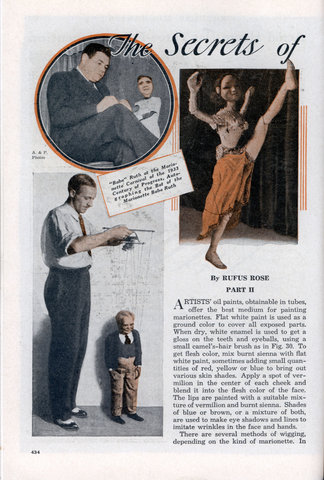 The Secrets of Making Marionettes

ARTISTS’ oil paints, obtainable in tubes, offer the best medium for painting marionettes. Flat white paint is used as a ground color to cover all exposed parts. When dry, white enamel is used to get a gloss on the teeth and eyeballs, using a small camel’s-hair brush as in Fig. 30. To get flesh color, mix burnt sienna with flat white paint, sometimes adding small quantities of red, yellow or blue to bring out various skin shades. Apply a spot of vermilion in the center of each cheek and blend it into the flesh color of the face. The lips are painted with a suitable mixture of vermilion and burnt sienna. Shades of blue or brown, or a mixture of both, are used to make eye shadows and lines to imitate wrinkles in the face and hands.