The films are exhibited on a silk screen, measuring 18 by 22 inches, which is placed behind the doors of the sounding-box. It is claimed that the pictures are projected clearly enough to be seen by an audience 40 feet away. 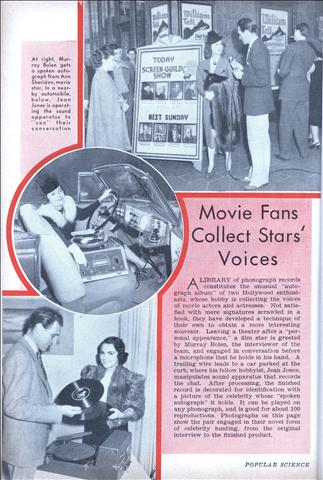 Movie Fans Collect Stars’ Voices
A LIBRARY of phonograph records constitutes the unusual “autograph album” of two Hollywood enthusiasts, whose hobby is collecting the voices of movie actors and actresses. Not satisfied with mere signatures scrawled in a book, they have developed a technique of their own to obtain a more interesting souvenir. 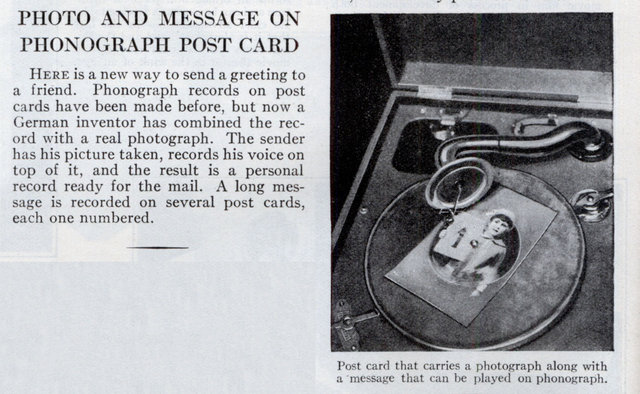 Here is a new way to send a greeting to a friend. Phonograph records on post cards have been made before, but now a German inventor has combined the record with a real photograph. The sender has his picture taken, records his voice on top of it, and the result is a personal record ready for the mail. A long message is recorded on several post cards, each one numbered. 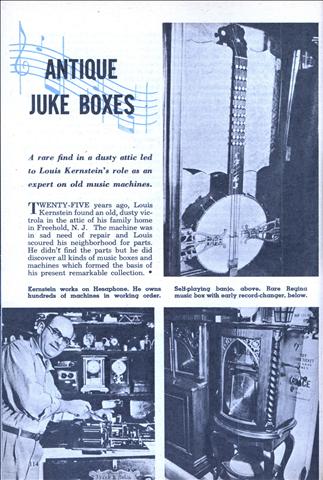 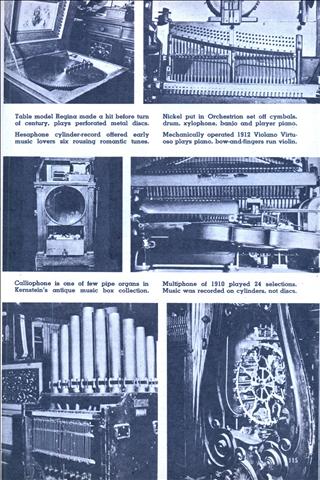 A rare find in a dusty attic led to Louis Kernstein’s role as an expert on old music machines.

TWENTY-FIVE years ago, Louis Kernstein found an old, dusty victrola in the attic of his family home in Freehold, N. J. The machine was in sad need of repair and Louis scoured his neighborhood for parts. He didn’t find the parts but he did discover all kinds of music boxes and machines which formed the basis of his present remarkable collection. 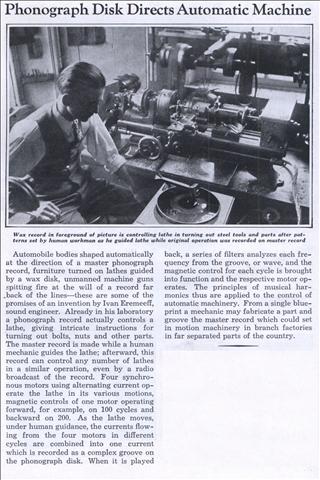 Automobile bodies shaped automatically at the direction of a master phonograph record, furniture turned on lathes guided by a wax disk, unmanned machine guns spitting fire at the will of a record far back of the linesâ€”these are some of the promises of an invention by Ivan Eremeeff, sound engineer. 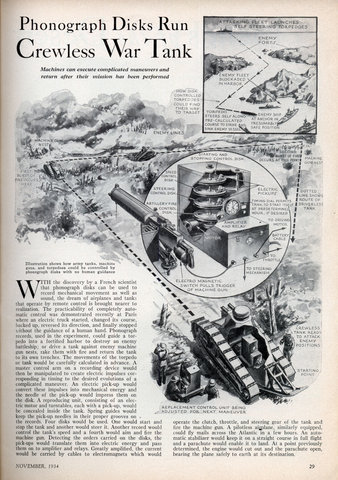 Machines can execute complicated maneuvers and return after their mission has been performed WITH the discovery by a French scientist that phonograph disks can be used to record mechanical movement as well as sound, the dream of airplanes and tanks that operate by remote control is brought nearer to realization. The practicability of completely automatic control was demonstrated recently at Paris where an electric truck started, changed its course, backed up, reversed its direction, and finally stopped without the guidance of a human hand. Phonograph records, used in the experiment, could guide a torpedo into a fortified harbor to destroy an enemy battleship; or drive a tank against enemy machine gun nests, rake them with fire and return the tank to its own trenches. The movements of the torpedo or tank would be carefully calculated in advance. A master control arm on a recording device would then be manipulated to create electric impulses corresponding in timing to the desired evolutions of a complicated maneuver. An electric pick-up would convert these impulses into mechanical energy and the needle of the pick-up would impress them on the disk.

USE PHONOGRAPH AS AN ALARM CLOCK
A novel attachment for the phonograph by which a heavy sleeper may be aroused at any hour he wishes by soft music, was recently shown in London, England. The alarm-clock device is set at the desired hour, and wound. A brake on the turntable of the phonograph is released at the set hour by a slight pull from the alarm key of the clock. 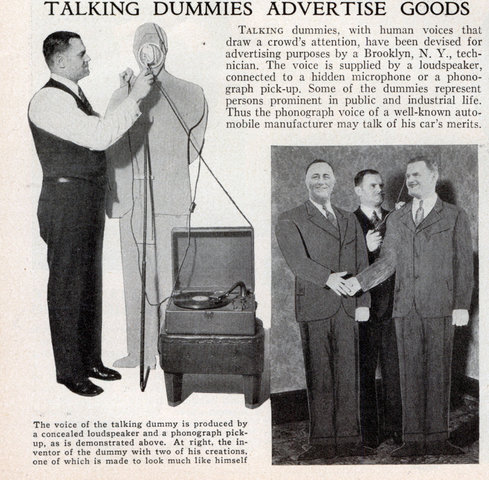 TALKING DUMMIES ADVERTISE GOODS
Talking dummies, with human voices that draw a crowd’s attention, have been devised for advertising purposes by a Brooklyn, N. Y., technician. The voice is supplied by a loudspeaker, connected to a hidden microphone or a phonograph pick-up. Some of the dummies represent persons prominent in public and industrial life. Thus the phonograph voice of a well-known automobile manufacturer may talk of his car’s merits. 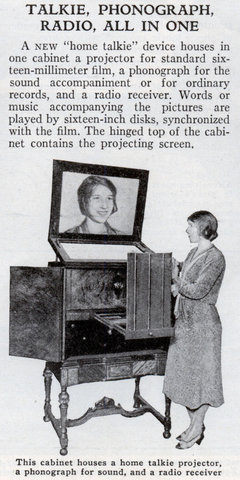 TALKIE, PHONOGRAPH, RADIO, ALL IN ONE

A new “home talkie” device houses in one cabinet a projector for standard sixteen-millimeter film, a phonograph for the sound accompaniment or for ordinary records, and a radio receiver. Words or music accompanying the pictures are played by sixteen-inch disks, synchronized with the film. The hinged top of the cabinet contains the projecting screen. 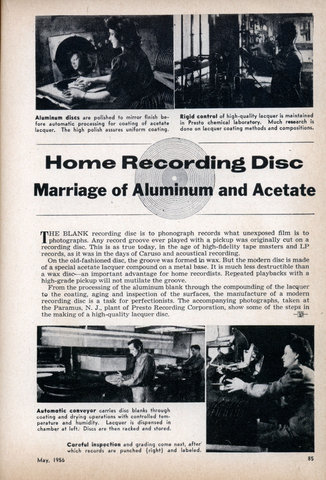 Marriage of Aluminum and Acetate

THE BLANK recording disc is to phonograph records what unexposed film is to photographs. Any record groove ever played with a pickup was originally cut on a recording disc. This is as true today, in the age of high-fidelity tape masters and LP records, as it was in the days of Caruso and acoustical recording.