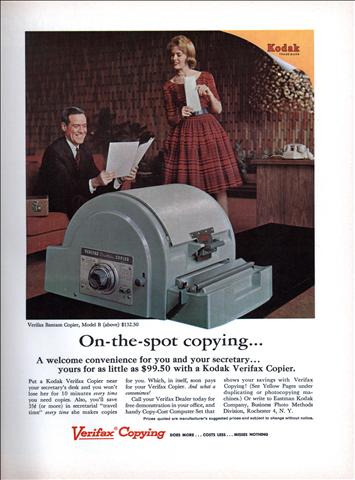 A welcome convenience for you and your secretary… yours for as little as $99.50 with a Kodak Verifax Copier.

Put a Kodak Verifax Copier near your secretary’s desk and you won’t lose her for 10 minutes every time you need copies. Also, you’ll save 35c (or more) in secretarial “travel time” every time she makes copies for you. Which, in itself, soon pays for your Verifax Copier. And what a convenience!

Fortune
Issue: Oct, 1961
Posted in: Advertisements
Tags: photocopier, Xerox
4 Comments on XEROX: This was the beginning of office copying. (Oct, 1961)

XEROX: This was the beginning of office copying. (Oct, 1961) 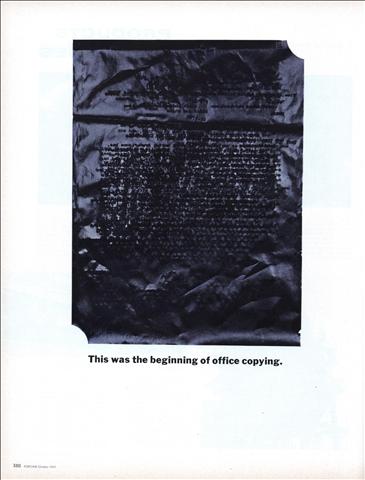 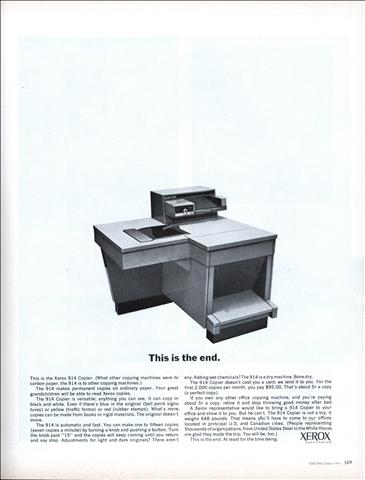 This was the beginning of office copying.

This is the end.

The 914 makes permanent copies on ordinary paper. Your great grandchildren will be able to read Xerox copies.

The 914 Copier is versatile; anything you can see, it can copy in black and white. Even if there’s blue in the original (ball point signatures) or yellow (traffic forms) or red (rubber stamps). What’s more, copies can be made from books or rigid materials. The original doesn’t move.

Rather than speculate Anken’s patent for a “Portable Photocopying Apparatus” may be found here. The Polaroid lawsuit I found against Anken involved trademark infringement over the name of one of their copy machines and had nothing to do with this portable copier.  Reading the patent apparently a sensitized sheet and the original are exposed to light and the exposed sheet goes through development and fixing. The fact that this copier came out shortly after Xerox began offering office machines using their dry process probably contributed to its disappearance. 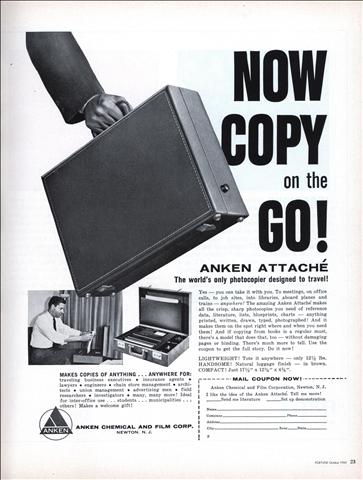 NOW COPY on the GO!

ANKEN ATTACHE
The world’s only photocopier designed to travel!

Yes — you can take it with you. To meetings, on office calls, to job sites, into libraries, aboard planes and trains — anywhere! The amazing Anken Attache makes all the crisp, sharp photocopies you need of reference data, literature, lists, blueprints, charts — anything printed, written, drawn, typed, photographed! 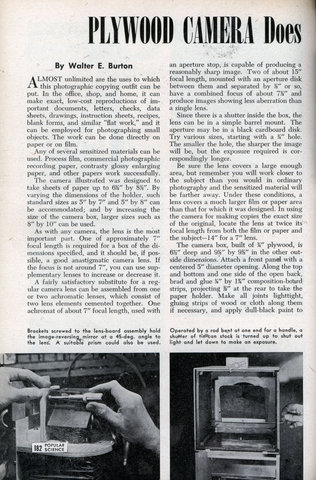 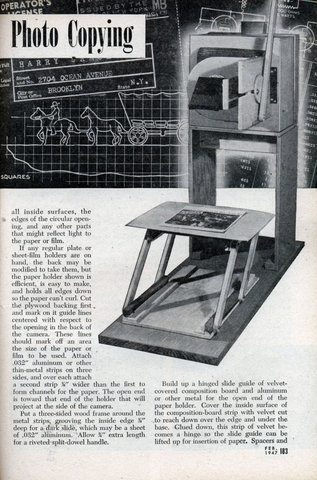 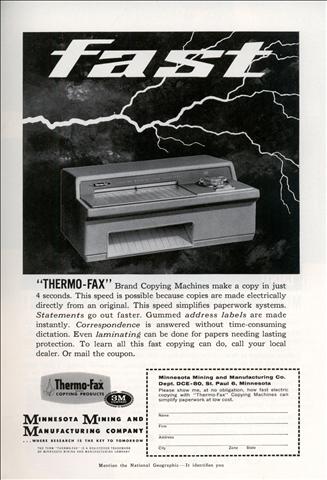 “THERMO-FAX” Brand Copying Machines make a copy in just 4 seconds. This speed is possible because copies are made electrically directly from an original. This speed simplifies paperwork systems. Statements go out faster. Gummed address labels are made instantly. Correspondence is answered without time-consuming dictation. Even laminating can be done for papers needing lasting protection. To learn all this fast copying can do, call your local dealer. Or mail the coupon.

…WHERE RESEARCH IS THE KEY TO TOMORROW

Portable Photo Copier Folds Like a Trunk When Carried (Aug, 1939) 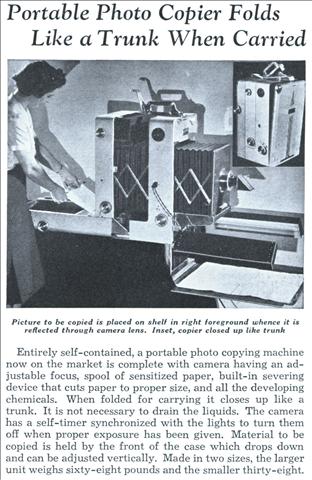 Portable Photo Copier Folds Like a Trunk When Carried

Entirely self-contained, a portable photo copying machine now on the market is complete with camera having an adjustable focus, spool of sensitized paper, built-in severing device that cuts paper to proper size, and all the developing chemicals. When folded for carrying it closes up like a trunk. It is not necessary to drain the liquids. The camera has a self-timer synchronized with the lights to turn them off when proper exposure has been given. Material to be copied is held by the front of the case which drops down and can be adjusted vertically. Made in two sizes, the larger unit weighs sixty-eight pounds and the smaller thirty-eight. 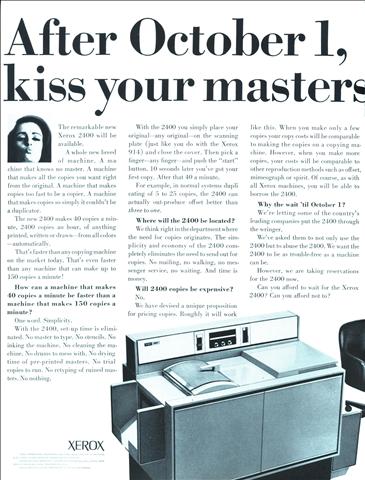 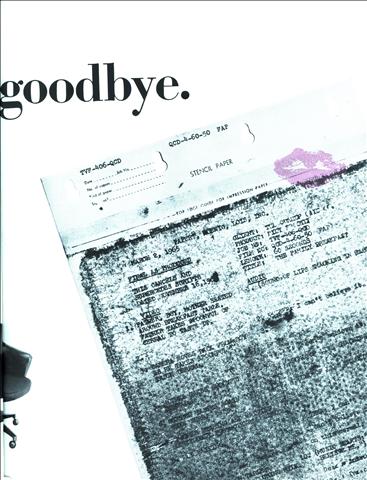 After October 1, kiss your masters goodbye.

The remarkable new Xerox 2400 will he available.

The new 2400 makes 40 copies a minute, 2400 copies an hour, of anything printed, written or drawn—from all colors —automatically.

Time
Issue: Mar, 1956
Posted in: Advertisements
Tags: photocopier
4 Comments on One minute is all it takes (Mar, 1956) 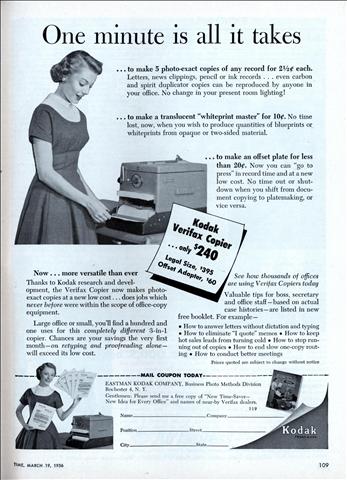 One minute is all it takes

… to make 5 photo-exact copies of any record for 2-1/2c each.
Letters, news clippings, pencil or ink records . . . even carbon and spirit duplicator copies can be reproduced by anyone in your office. No change in your present room lighting!

… to make a translucent “whiteprint master” for 100. No time lost, now, when you wish to produce quantities of blueprints or whiteprints from opaque or two-sided material. 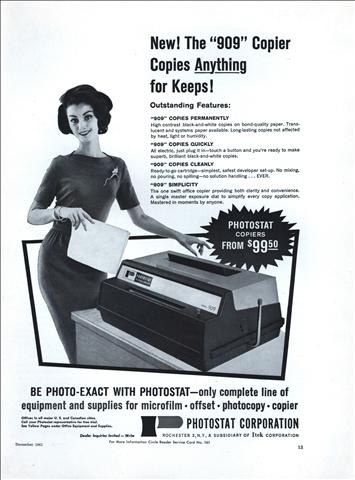 New! The “909” Copier Copies Anything for Keeps!

Printing Without Ink – Origin of the Xerox Machine (Jan, 1949) 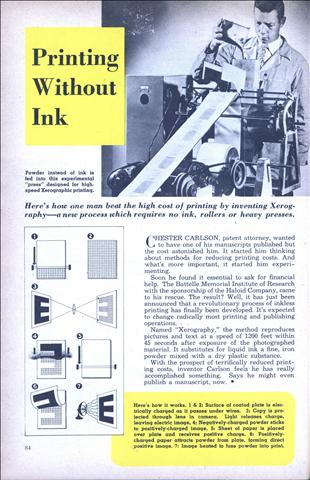 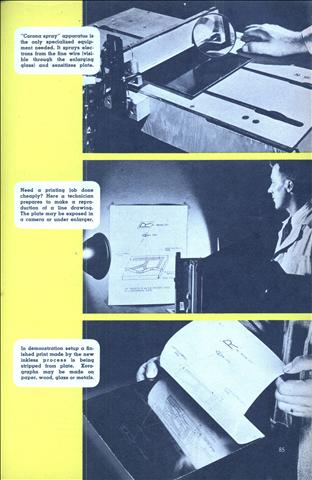 Here’s how one man beat the high cost of printing by inventing Xerographyâ€”a new process which requires no ink, rollers or heavy presses.
CHESTER CARLSON, patent attorney, wanted to have one of his manuscripts published but the cost astonished him. It started him thinking about methods for reducing printing costs. And what’s more important, it started him experimenting.

Soon he found it essential to ask for financial heLp. The Battelle Memorial Institute of Research with the sponsorship of the Haloid Company, came to his rescue. The result? Well, it has just been announced that a revolutionary process of inkless printing has finally been developed. It’s expected to change radically most printing and publishing operations.

Named “Xerography,” the method reproduces pictures and text at a speed of 1200 feet within 45 seconds after exposure of the photographed material. It substitutes for liquid ink a fine, iron powder mixed with a dry plastic substance.
With the prospect of terrifically reduced printing costs, inventor Carlson feels he has really accomplished something. Says he might even publish a manuscript, now.

Here’s how it works. 1 & 2: Surface of coated plate is electrically charged as it passes under wires.