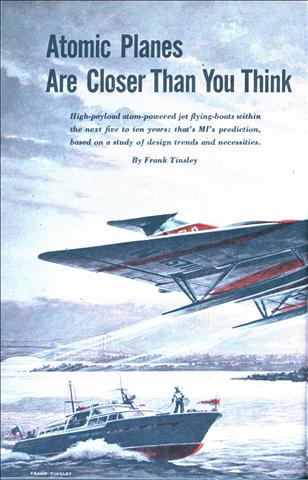 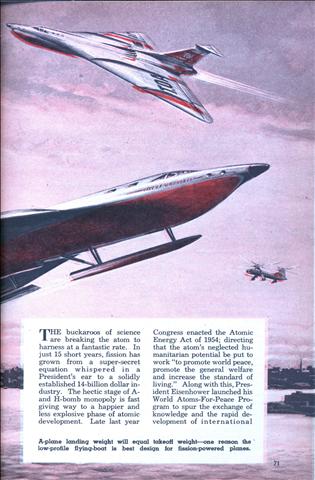 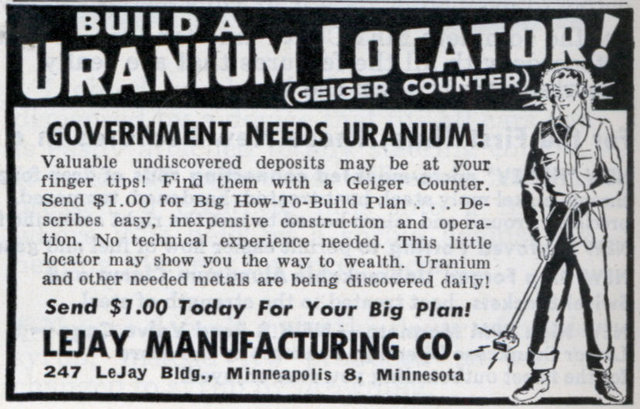 Valuable undiscovered deposits may be at your finger tips! Find them with a Geiger Counter. Send $1.00 for Big How-To-Build Plan . . . Describes easy, inexpensive construction and operation. No technical experience needed. This little locator may show you the way to wealth. Uranium and other needed metals are being discovered daily! 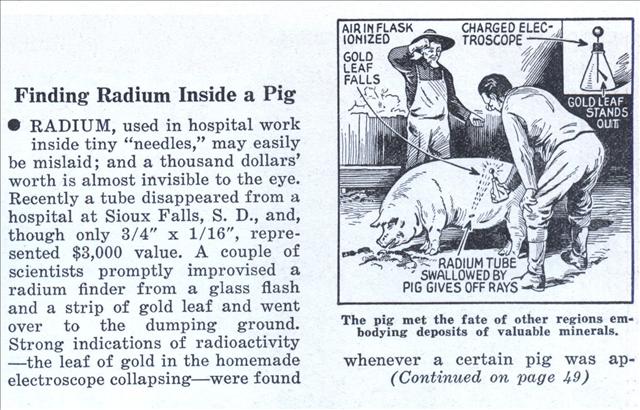 This man was later diagnosed with the only known case of wrist cancer. 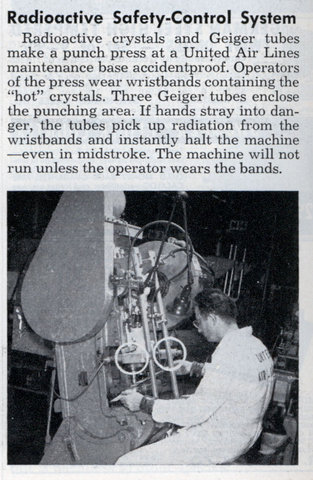 Radioactive Safety-Control System
Radioactive crystals and Geiger tubes make a punch press at a United Air Lines maintenance base accident proof. Operators of the press wear wristbands containing the “hot” crystals. Three Geiger tubes enclose the punching area. If hands stray into danger, the tubes pick up radiation from the wristbands and instantly halt the machine â€”even in midstroke. The machine will not run unless the operator wears the bands. 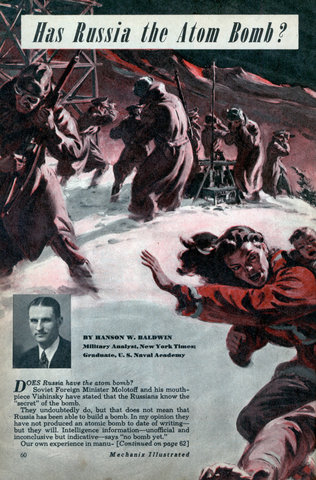 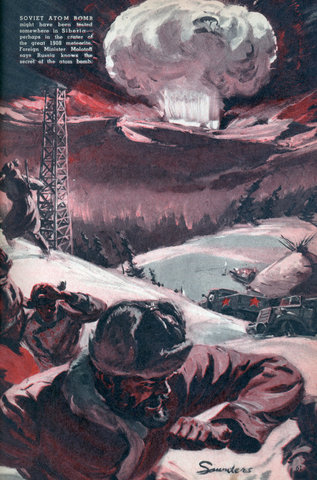 National Geographic
Issue: Sep, 1958
Posted in: Science, Sign of the Times
Tags: radioactivity
5 Comments on YOU AND THE OBEDIENT Atom (Sep, 1958)

Here is an amazing, huge National Geographic article/pictorial about the state of nuclear science and technology in 1958. Be sure to check out this crazy picture of mice being taped down on a model train that’s about to be driven through a particle accelerator. 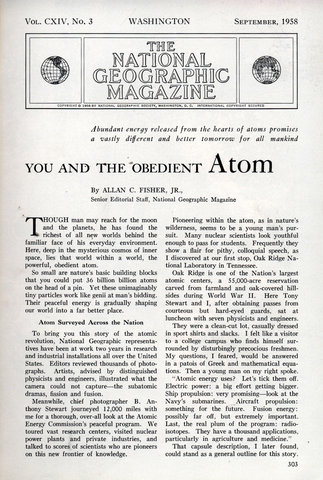 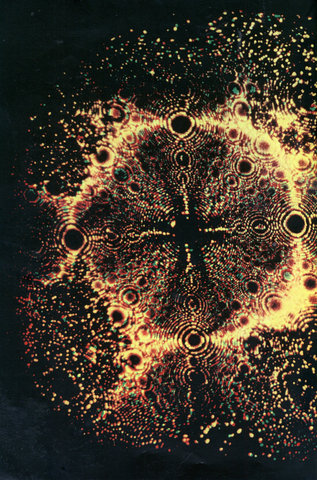 YOU AND THE OBEDIENT Atom

THOUGH man may reach for the moon and the planets, he has found the richest of all new worlds behind the familiar face of his everyday environment. Here, deep in the mysterious cosmos of inner space, lies that world within a world, the powerful, obedient atom.

So small are nature’s basic building blocks that you could put 36 billion billion atoms on the head of a pin. Yet these unimaginably tiny particles work like genii at man’s bidding. Their peaceful energy is gradually shaping our world into a far better place. 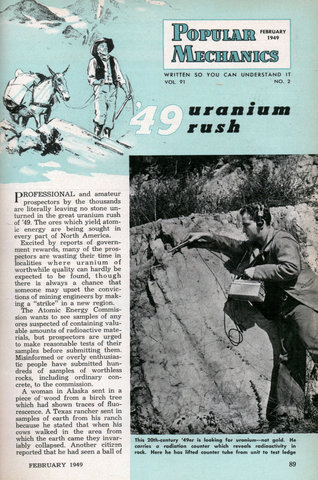 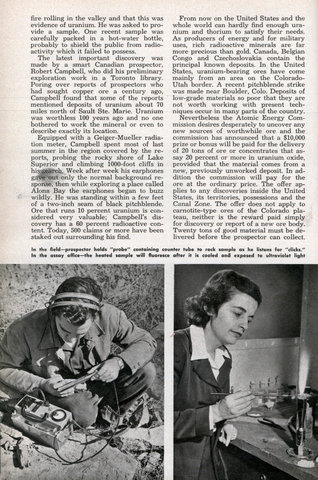 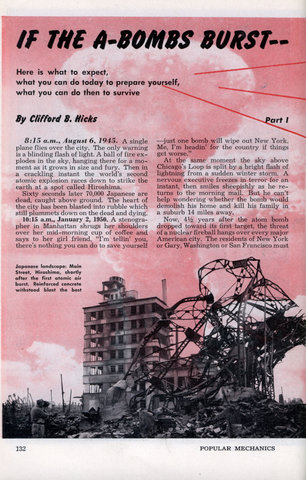 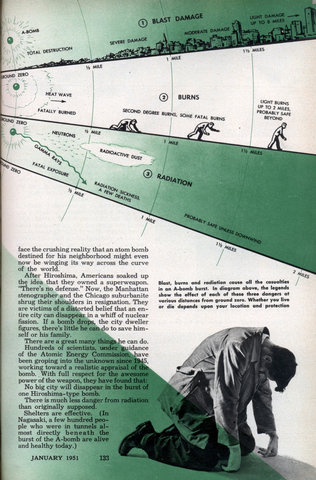 If the A-Bombs Burst

8:15 a.m., August 6, 1945. A single plane flies over the city. The only warning is a blinding flash of light. A ball of fire explodes in the sky, hanging there for a moment as it grows in size and fury. Then in a crackling instant the world’s second atomic explosion races down to strike the earth at a spot called Hiroshima.

Sixty seconds later 70,000 Japanese are dead, caught above ground. The heart of the city has been blasted into rubble which still plummets down on the dead and dying.

10:15 a.m., January 2, 1950. A stenographer in Manhattan shrugs her shoulders over her mid-morning cup of coffee and says to her girl friend, “I’m tellin’ you, there’s nothing you can do to save yourself â€”just one bomb will wipe out New York. Me, I’m headin’ for the country if things get worse.”

At the same moment the sky above Chicago’s Loop is split by a bright flash of lightning from a sudden winter storm. A nervous executive freezes in terror for an instant, then smiles sheepishly as he returns to the morning mail. But he can’t help wondering whether the bomb would demolish his home and kill his family in a suburb 14 miles away.

$35,000 REWARD for URANIUM
Here’s your chance to “cash in!” Over $3,750,000 in Government Bonuses have been paid for URANIUM discoveries in the past 2 years. Currently $175,000 a month is paid to people like you. Precision Geiger Counters and Scintillators are the finest instruments made for URANIUM pros-specting. These highly sensitive instruments are compact, lightweight and ruggedly built for field use. Prices start at $29.95.

CONTACT YOUR NEAREST DEALER or write direct to factory for FREE 12-PAGE CATALOG and our 24-PAGE BOOKLET with “64 QUESTIONS AND ANSWERS ON GEIGER COUNTERS AND SCINTILLATORS.” 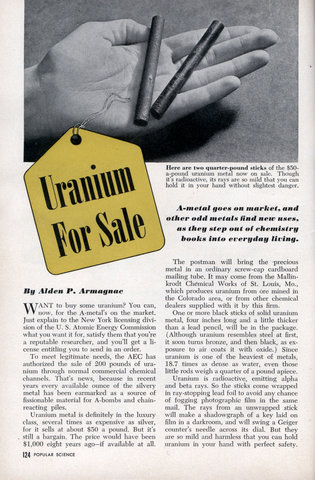 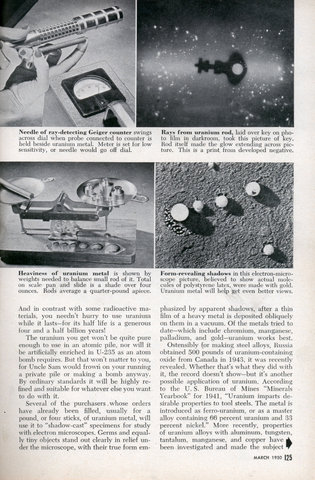