Fast and Smart – Designers race to build the supercomputers of the future (Mar, 1988)

When reading this, keep in mind that a single AMD 6990 Graphics Card which is available for $700 is capable of over 5 teraFlOPS.

And apparently Seymour Cray was so bad-ass he played Minecraft for real. 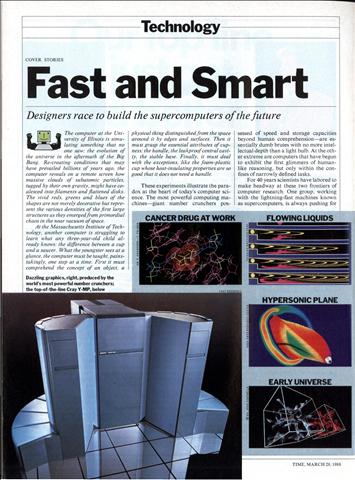 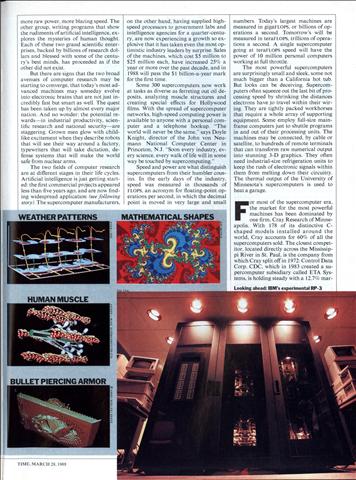 The computer at the University of Illinois is simulating something that no one saw: the evolution of the universe in the aftermath of the Big Bang. Re-creating conditions that may have prevailed billions of years ago, the computer reveals on a remote screen how massive clouds of subatomic particles, tugged by their own gravity, might have coalesced into filaments and flattened disks. The vivid reds, greens and blues of the shapes are not merely decorative but represent the various densities of the first large structures as they emerged from primordial chaos in the near vacuum of space.

PEACE MAKER
They called this weapon the Peacemaker. In the hands of the Western lawmen, it brought peace and order to the turbulent frontier.
In the West today, Sandia Corporation engineers and scientists explore new frontiers in research and development engineering to produce modern peacemakers . . . the nuclear weapons that deter aggression and provide a vital element of security for the nations of the free world.