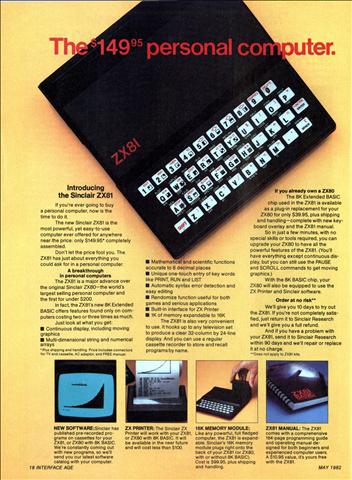 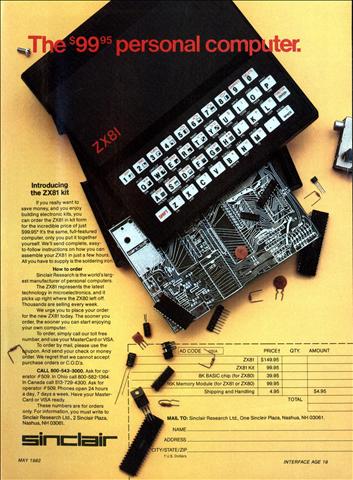 Introducing the Sinclair ZX81 If you’re ever going to buy a personal computer, now is the time to do it.

The new Sinclair ZX81 is the most powerful, yet easy-to-use computer ever offered for anywhere near-the price: only $149.95* completely assembled.

Don’t let the price fool you. The ZX81 has just about everything you could ask for in a personal computer. 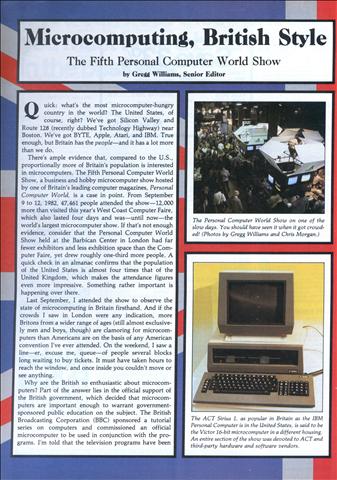 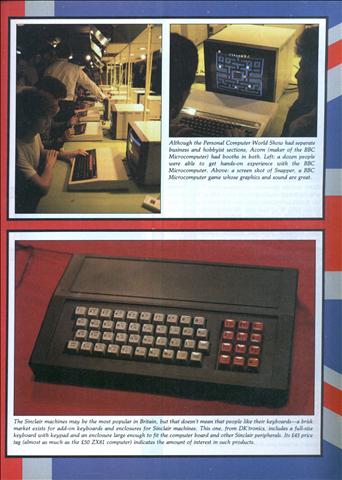 Quick: what’s the most microcomputer-hungry country in the world? The United States, of course, right? We’ve got Silicon Valley and Route 128 (recently dubbed Technology Highway) near Boston. We’ve got BYTE, Apple, Atari, and IBM. True enough, but Britain has the people and it has a lot more than we do.

There’s ample evidence that, compared to the U.S., proportionally more of Britain’s population is interested in microcomputers. The Fifth Personal Computer World Show, a business and hobby microcomputer show hosted by one of Britain’s leading computer magazines, Personal Computer World, is a case in point. From September 9 to 12, 1982, 47,461 people attended the showâ€”12,000 more than visited this year’s West Coast Computer Faire, which also lasted four days and wasâ€”until nowâ€”the world’s largest microcomputer show.

In a comment on Flat Screen TV in 1958 MilanMerhar says:
“Sinclair Radionics introduced its “Microvision TV1A pocket TV” in 1977 using the same side-scanning technology as described for the Aiken tube.

The major technical problem such designs have is severe geometric distortion, the compensation for which greatly complicated the analog scanning circuitry of the day. In fact, Sinclair claimed it had taken them over ten years to perfect that aspect of their design. “

I don’t know if this model uses that tube design, but it’s pretty interesting none the less. Sure does look a lot smaller from the front, doesn’t it? 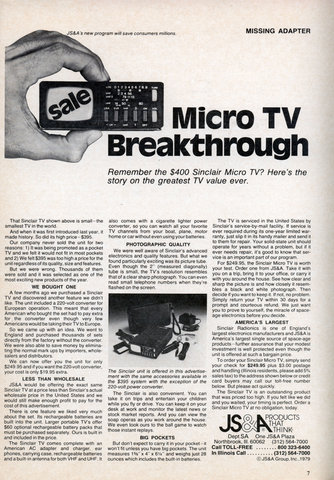 Remember the $400 Sinclair Micro TV? Here’s the story on the greatest TV value ever.

That Sinclair TV shown above is small-the smallest TV in the world.

And when it was first introduced last year, it made history. So did its high price-$395.

Our company never sold the unit for two reasons: 1) It was being promoted as a pocket TV and we felt it would not fit in most pockets and 2) We felt $395 was too high a price for the unit regardless of its quality, size and features.