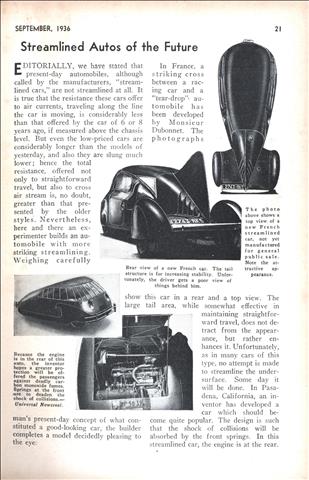 Streamlined Autos of the Future

Editorially, we have stated that present-day automobiles, although called by the manufacturers, “streamlined cars,” are not streamlined at all. It is true that the resistance these cars offer to air currents, traveling along the line the car is moving, is considerably less than that offered by the car of 6 or 8 years ago, if measured above the chassis level. 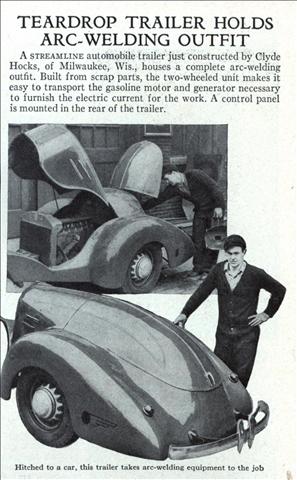 A streamline automobile trailer just constructed by Clyde Hocks, of Milwaukee, Wis., houses a complete arc-welding outfit. Built from scrap parts, the two-wheeled unit makes it easy to transport the gasoline motor and generator necessary to furnish the electric current for the work. A control panel is mounted in the rear of the trailer. 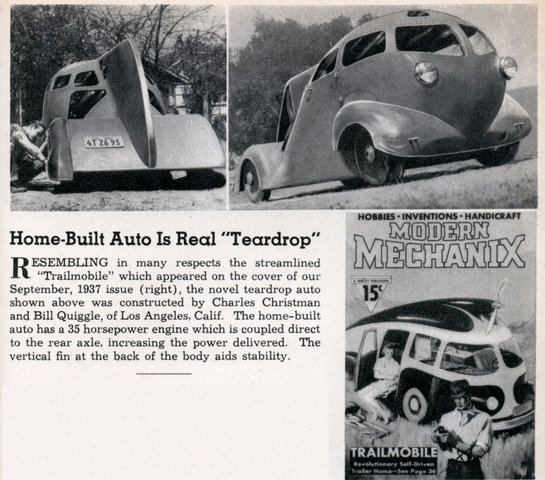 Home-Built Auto Is Real “Teardrop”
RESEMBLING in many respects the streamlined “Trailmobile” which appeared on the cover of our September, 1937 issue (right), the novel teardrop auto shown above was constructed by Charles Christman and Bill Quiggle, of Los Angeles, Calif. The home-built auto has a 35 horsepower engine which is coupled direct to the rear axle, increasing the power delivered. The vertical fin at the back of the body aids stability. 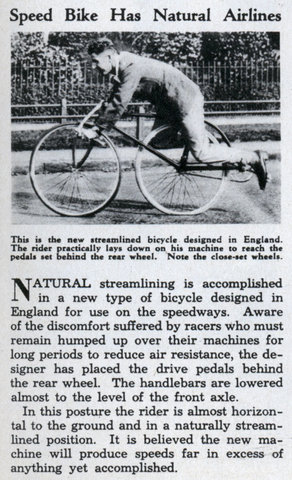 NATURAL streamlining is accomplished in a new type of bicycle designed in England for use on the speedways. Aware of the discomfort suffered by racers who must remain humped up over their machines for long periods to reduce air resistance, the designer has placed the drive pedals behind the rear wheel. The handlebars are lowered almost to the level of the front axle.

In this posture the rider is almost horizontal to the ground and in a naturally streamlined position. It is believed the new machine will produce speeds far in excess of anything yet accomplished.