Mechanix Illustrated
Issue: Nov, 1955
Posted in: Aviation, DIY
Tags: models, vertical takeoff
3 Comments on VTO – Build a flying model of the most revolutionary of all aircraft — a plane that takes off vertically. (Nov, 1955)

VTO – Build a flying model of the most revolutionary of all aircraft — a plane that takes off vertically. (Nov, 1955)

The only prototype to fly is at the Florida Air Museum, Lakeland, FL.  Because the intended engine never arrived the plane never actually took off or landed vertically.  Takeoffs and landings were accomplished by attaching wheels for conventional takeoffs and landings although a few transitions were made in flight as well as one instance of bringing it to a hover. 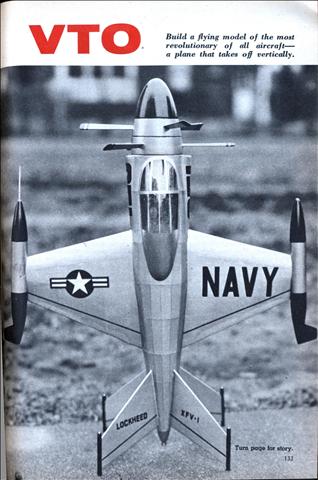 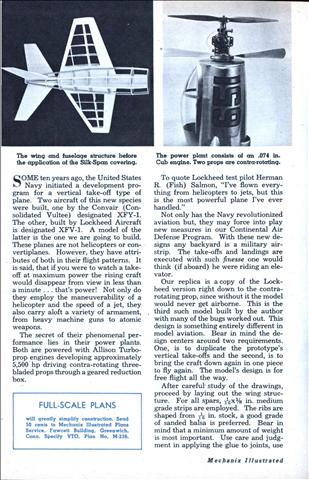 VTO – Build a flying model of the most revolutionary of all aircraft — a plane that takes off vertically.

SOME ten years ago, the United States – Navy initiated a development program for a vertical take-off type of plane. Two aircraft of this new species were built, one by the Convair (Consolidated Vultee) designated XFY-1. The other, built by Lockheed Aircraft is designated XFV-1. A model of the latter is the one we are going to build. These planes are not helicopters or convertiplanes. However, they have attributes of both in their flight patterns.

Over 50 years later and this technology is still incredibly hard to get to work right, though I think it’s one of those things where fast computers and accurate sensors help a lot. 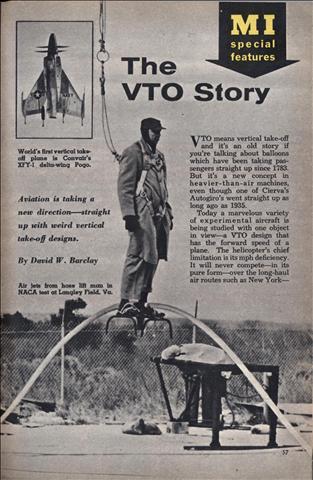 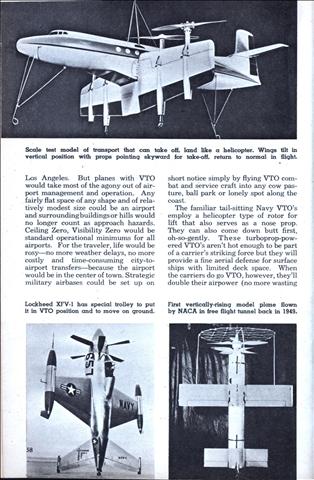 Aviation is taking a new direction—straight up with weird vertical take-off designs.

VTO means vertical take-off and it’s an old story if you’re talking about balloons which have been taking passengers straight up since 1783. But it’s a new concept in heavier-than-air machines, even though one of Cierva’s Autogiro’s went straight up as long ago as 1935.

Today a marvelous variety of experimental aircraft is being studied with one object in view—a VTO design that has the forward speed of a plane. The helicopter’s chief limitation is its mph deficiency. 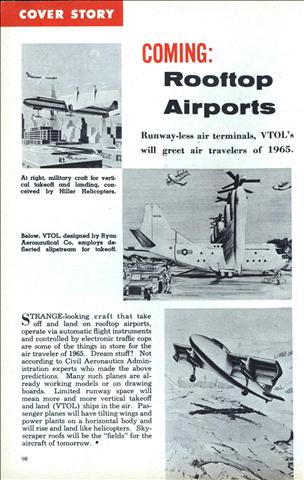 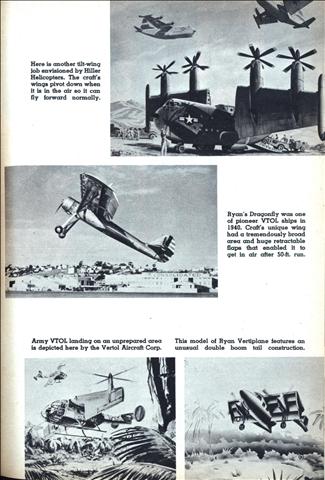 STRANGE-looking craft that take off and land on rooftop airports, operate via automatic flight instruments and controlled by electronic traffic cops are some of the things in store for the air traveler of 1965. Dream stuff? Not according to Civil Aeronautics Administration experts who made the above predictions. Many such planes are already working models or on drawing boards. Limited runway space will mean more and more vertical takeoff and land (VTOL) ships in the air. Passenger planes will have tilting wings and power plants on a horizontal body and will rise and land like helicopters. Skyscraper roofs will be the “fields” for the aircraft of tomorrow.