Take Your Radio on Your Motor Camping Trip (Jul, 1929) 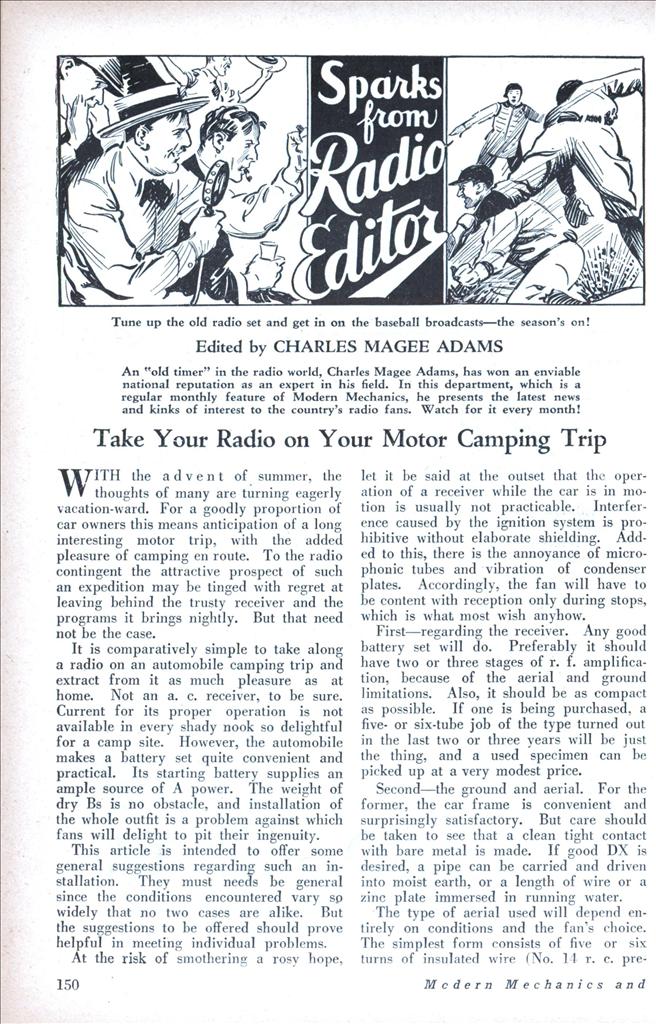 Take Your Radio on Your Motor Camping Trip

WITH the advent of summer, the thoughts of many are turning eagerly vacation-ward. For a goodly proportion of car owners this means anticipation of a long interesting motor trip, with the added pleasure of camping en route. To the radio contingent the attractive prospect of such an expedition may be tinged with regret at leaving behind the trusty receiver and the programs it brings nightly. But that need not be the case.

It is comparatively simple to take along a radio on an automobile camping trip and extract from it as much pleasure as at home. Not an a. c. receiver, to be sure. Current for its proper operation is not available in every shady nook so delightful for a camp site. However, the automobile makes a battery set quite convenient and practical. Its starting battery supplies an ample source of A power. The weight of dry Bs is no obstacle, and installation of the whole outfit is a problem against which fans will delight to pit their ingenuity.

This article is intended to offer some general suggestions regarding such an installation. They must needs be general since the conditions encountered vary so widely that no two cases are alike. But the suggestions to be offered should prove helpful in meeting individual problems.

At the risk of smothering a rosy hope, let it be said at the outset that the operation of a receiver while the car is in motion is usually not practicable. Interference caused by the ignition system is prohibitive without elaborate shielding. Added to this, there is the annoyance of microphonic tubes and vibration of condenser plates. Accordingly, the fan will have to be content with reception only during stops, which is what most wish anyhow.

First—regarding the receiver. Any good battery set will do. Preferably it should have two or three stages of r.f. amplification, because of the aerial and ground limitations. Also, it should be as compact as possible. If one is being purchased, a five- or six-tube job of the type turned out in the last two or three years will be just the thing, and a used specimen can be picked up at a very modest price.

Second—the ground and aerial. For the former, the car frame is convenient and surprisingly satisfactory. But care should be taken to see that a clean tight contact with bare metal is made. If good DX is desired, a pipe can be carried and driven into moist earth, or a length of wire or a zinc plate immersed in running water.

The type of aerial used will depend entirely on conditions and the fan’s choice. The simplest form consists of five or six turns of insulated wire (No. 14 r. c. preferred) wrapped around the car’s top, with a half inch or inch between turns. If the top is of metal, the wire should be outside, while if it is of wood and fabric the wire may be inside.

A better aerial, though one not so convenient, can be made by stringing up the usual length of wire between two trees (provided, they grow where needed). Failing this, 50 or 100 feet of insulated wire can simply be laid out in a straight line on the ground and used as the aerial. Good results can be obtained, too, by driving a nail into a tree and connecting the aerial lead to this.

Mounting the receiver presents a nice little problem. If possible, it is desirable to have it installed within the car permanently. A shelf at the rear of the front seat is excellent provided that can be managed.

The loudspeaker deserves more than passing attention. It is not recommended that an open cone be used. This type is quite vulnerable to the damage inevitable in motor travel. An enclosed cone is preferable, provided it is small enough. A horn is still less likely to be damaged but has the disadvantage of being awkwardly large, when space is an important matter. A solution of the difficulty lies in rigging up a speaker from a standard unit, with a home-made horn of proper size and shape. This can be made of cardboard and to fit into the available space.

If the receiver is carried packed and set up at night, a simple and effective means of battery connection is the cable and plug arrangement. The cable is connected to the receiver posts, and the various battery leads brought to the terminal plate, which can be mounted at any convenient point. AH connections can then be made merely by slipping the plug attached to the cable over the pins on this terminal plate.

The logical place to carry B batteries is the tool box or compartment under the rear deck. Care must be taken, however, to wedge them tightly in place to prevent jolting about and breaking connections. Also, they must not be short-circuited by tools or the metal compartment walls. A good safeguard against this is covering the tops of the batteries with heavy paper or a burlap bag.

The fan need have no fear that the use of a receiver at night will drain the starting battery dangerously. The amount of current consumed by a five- or six-tube set is small in comparison with that drawn by a starter, and with the long steady charge of the day’s driving the battery should be kept in tip top condition notwithstanding several hours’ radio use each night.

Altogether, the fan can expect real fun from devising a radio installation for his automobile camp along the lines suggested.