Science And Mechanics
Issue: Feb, 1940
Posted in: House and Home, Origins
5 Comments on Takes the Drudgery Out of Mopping (Feb, 1940) 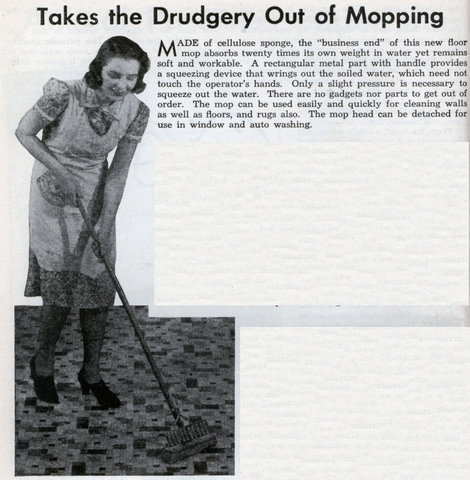 Takes the Drudgery Out of Mopping

MADE of cellulose sponge, the “business end” of this new floor mop absorbs twenty times its own weight in water yet remains soft and workable. A rectangular metal part with handle provides a squeezing device that wrings out the soiled water, which need not touch the operator’s hands. Only a slight pressure is necessary to squeeze out the water. There are no gadgets nor parts to get out of order. The mop can be used easily and quickly for cleaning walls as well as floors, and rugs also. The mop head can be detached for use in window and auto washing.