This seems like it would be incredibly imprecise. It seems like if you wanted to cheat, you could abstain from pressing the first button and then press the second to vote. You would essentially get counted twice. Try that trick with a really powerful transmitter and you could probably throw the whole vote. 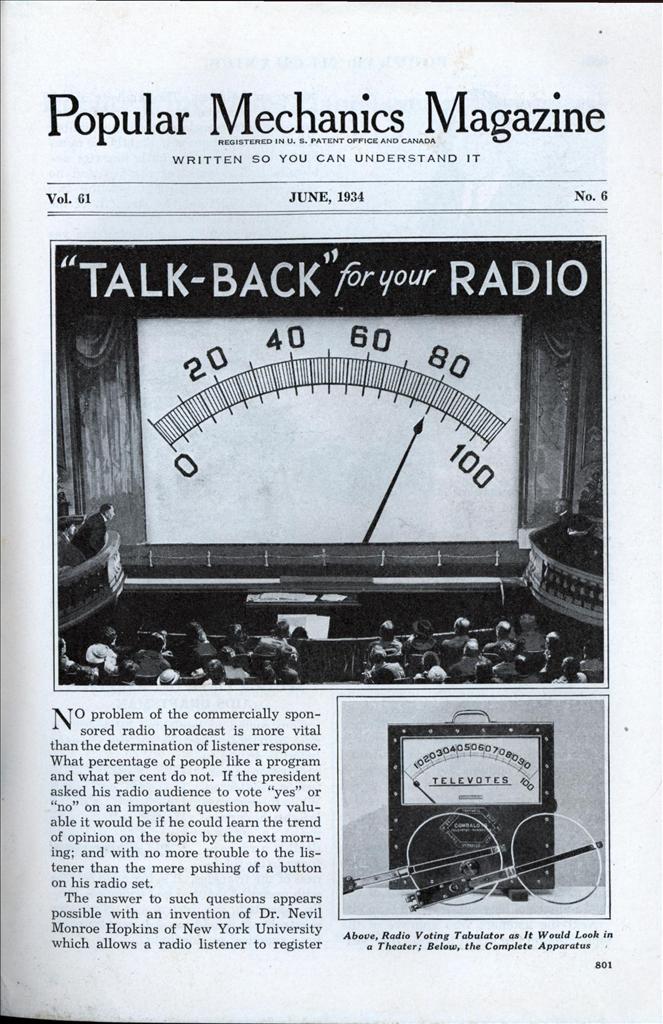 “TALK-BACK” for your RADIO

NO problem of the commercially sponsored radio broadcast is more vital than the determination of listener response. What percentage of people like a program and what per cent do not. If the president asked his radio audience to vote “yes” or “no” on an important question how valuable it would be if he could learn the trend of opinion on the topic by the next morning; and with no more trouble to the listener than the mere pushing of a button on his radio set.

The answer to such questions appears possible with an invention of Dr. Nevil Monroe Hopkins of New York University which allows a radio listener to register his approval or disapproval of a program by “talking back” to the broadcasting station. The “talk-back” mechanism is the result of seven years of secret experimentation in which commercial and government scientists have participated. A large electrical company is now considering the invention from a practical standpoint. It is estimated that in quantity production the new talk-back device would cost only a dollar and could be attached to any radio set.

Dr. Hopkins has devised two ways of working out the problem of radio-audience reaction response. The first involves the use of small compact short-wave radio transmitters—of set wave length—attached to each receiving set. When the members of the invisible radio audience are asked to express an opinion they first press a button that sends a short-wave signal through the air. The total intensity of this short-wave signal formed by the thousands of little transmitters is picked up by the broadcasting company and its strength determined with a watt-meter, a device for measuring power. The readings on this meter are calibrated in terms of the total number of listeners who are tuned in.

Next the listeners who approve of the topic at hand are asked to press the “yes” button on their sets. The intensity of this signal is received by the broadcasting company and translated into the number of listeners who vote yes. Finally the number of listeners voting no is likewise determined. The ratio of the yes and no votes—the relative strength of the two signals—should total the strength of the whole number listening in.

A second way of determining the yes and no votes is by measuring the load in the electric power lines that energize the radio sets. Pushing the button to indicate that one is listening in increases the line load. While the gain for any one set would be small the aggregate increase is measurable. The gain in line load for yes and no votes can likewise be determined.