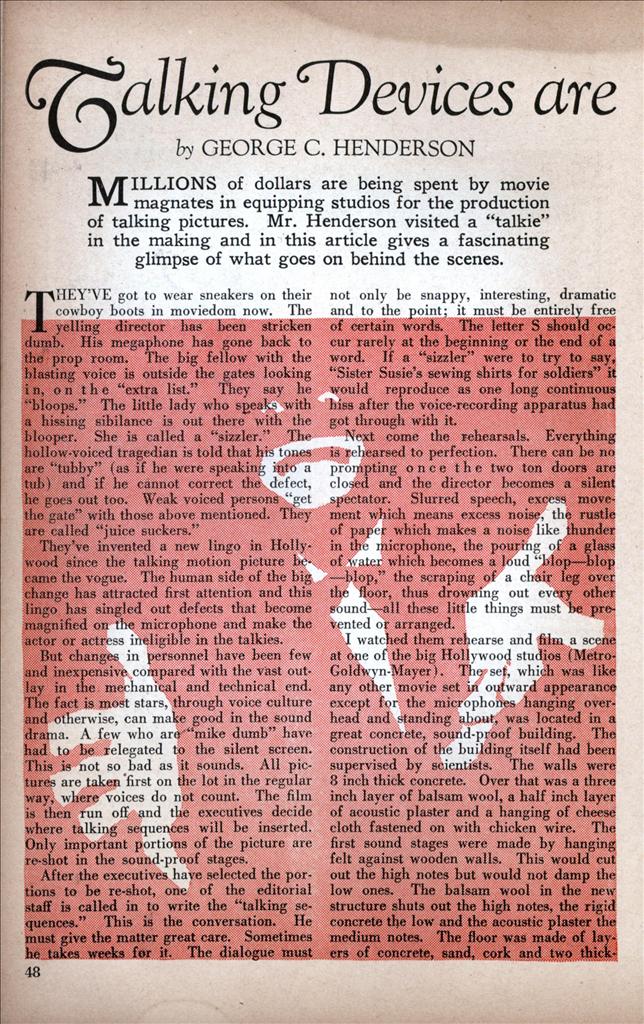 MILLIONS of dollars are being spent by movie magnates in equipping studios for the production of talking pictures. Mr. Henderson visited a “talkie” in the making and in this article gives a fascinating glimpse of what goes on behind the scenes.

THEY’VE got to wear sneakers on their cowboy boots in moviedom now. The yelling director has been stricken dumb. His megaphone has gone back to the prop room. The big fellow with the blasting voice is outside the gates looking in, on the “extra list.” They say he “bloops.” The little lady who speaks with a hissing sibilance is out there with the blooper. She is called a “sizzler.” The hollow-voiced tragedian is told that his tones are “tubby” (as if he were speaking into a tub) and if he cannot correct the defect, he goes out too. Weak voiced persons “get the gate” with those above mentioned. They are called “juice suckers.”

They’ve invented a new lingo in Hollywood since the talking motion picture became the vogue. The human side of the big change has attracted first attention and. this lingo has singled out defects that become magnified on the microphone and make the actor or actress ineligible in the talkies.

But changes in personnel have been few and inexpensive compared with the vast outlay in the mechanical and technical end. The fact is most stars, through voice culture and otherwise, can make good in the sound drama. A few who are “mike dumb” have had to be relegated to the silent screen. This is not so bad as it sounds. All pictures are taken first on the lot in the regular way, where voices do not count. The film is then run off and the executives decide where talking sequences will be inserted. Only important portions of the picture are re-shot in the sound-proof stages.

After the executives have selected the portions to be re-shot, one of the editorial staff is called in to write the “talking sequences.” This is the conversation. He must give the matter great care. Sometimes he takes weeks for it. The dialogue must not only be snappy, interesting, dramatic and to the point; it must be entirely free of certain words. The letter S should occur rarely at the beginning or the end of a word. If a “sizzler” were to try to say, “Sister Susie’s sewing shirts for soldiers” it would reproduce as one long continuous hiss after the voice-recording apparatus had got through with it.

Next come the rehearsals. Everything is rehearsed to perfection. There can be no prompting once the two ton doors are closed and the director becomes a silent spectator. Slurred speech, excess movement which means excess noise, the rustle of paper which makes a noise like thunder in the microphone, the pouring of a glass of water which becomes a loud “blop—blop —blop,” the scraping of a chair leg over the floor, thus drowning out every other sound—all these little things must he prevented or arranged.

I watched them rehearse and film a scene at one of the big Hollywood studios (Metro-Goldwyn-Mayer). The set, which was like any other movie set in outward appearance except for the microphones hanging overhead and standing about, was located in a great concrete, sound-proof building. The construction of the building itself had been supervised by scientists. The walls were 8 inch thick concrete. Over that was a three inch layer of balsam wool, a half inch layer of acoustic plaster and a hanging of cheese cloth fastened on with chicken wire. The first sound stages were made by hanging felt against wooden walls. This would cut out the high notes but would not damp the low ones. The balsam wool in the new-structure shuts out the high notes, the rigid concrete the low and the acoustic plaster the medium notes. The floor was made of layers of concrete, sand, cork and two thicknesses of wooden floor. The cork absorbs mechanical vibrations from the ground.

It is very difficult to gain entrance. Even after everything had been arranged a policeman stopped us. It had been found expensive to admit visitors. They talked or scraped their feet and hundreds of dollars worth of work had to be done over again. Getting past the policeman, we came upon a scene of great animation. Here was a great vaulted room, cluttered up with big, powerful lights, the floor covered with wires, boxes and instruments and apparatus scattered everywhere, electricians, technicians, carpenters and roustabouts hurrying back and forth, men on girders overhead manning the overhead cranes that shifted heavy objects from one place to another. And right in the midst of it all an orderly little room furnished with fine carpets and drapes, chairs and divans—the set. Here the actors and actresses moved in range of the camera.

But where was the camera? We found it in a refrigerator-like vault, looking out on the set through double plate glass of the finest German make. Johnny Arnold, the camera man, explained that he had to enter this sound-proof vault and close the big heavy door to keep the clicking of his camera from registering in the microphone. It was hot in there, Johnny was perspiring. He said it made a camera man’s job harder because he couldn’t take any orders from the director.

Electrical engineers and acoustic experts were getting their apparatus set. A baritone walked around the set singing selections from an Italian opera to test the stage at every point. Another went around clapping his hands. The technicians were listening in, watching their recording de- vices as these tests were made. Rehearsals were completed.

“Ready for interlock,” said Director Van Dyke to the switch board operator. The operator flashed signal lights. The camera motor, the recorder motor and the test record motor all were synchronized on a master distributor when an expert at the recording building threw a switch. The operator on the stage received the report, “interlock O.K.” Arnold, the camera man, reported, “camera O.K.”

The stage switchboard man pressed a switch which threw on a green light, the signal that camera was ready. In the room where the recording apparatus set, the expert switched on, a white light. That meant the recording machine was set, that he had a wax record on the test machine and that the film making machine was all right.

Arnold entered his booth and closed the door. It was so hot and stuffy in there that he did not enter it until the last moment. The actor and actress, Nils Asther and Raquel Torres, took their seats at the table where they were to speak the love scene. The director took up a position off the set, out of range of the camera, but so that he could signal to Arnold. He watched Arnold throw on the motor and caught his signal. He snapped his fingers.

Suddenly the actor and actress began to talk. A snap of the finger set things to moving. There were no shouts of “Ready,” “Action,” “Camera,” no waving of megaphones, no lurid denunciations. The director dare not move. He was afraid to un-wrinkle the scowl on his face for fear it would crackle in the megaphone.

At the “mixer panel” overhead, two operators sat with earphones over their ears. They were reminders that this was an engineer’s job. The director, who had been all powerful, had to give way to scientists. These operators listened intently to the voices. When they began to get faint, they turned knobs to raise the volume. As the actress turned toward the microphone they decreased the volume; when she turned away they increased it. They had to watch every movement. In his sound-proof room Johnny Arnold was turning his camera, unheard, as if he were in another world. The actor and actress went through the scene without interruption, as if they were alone in a garden really making love.

They stopped talking, Director Van Dyke motioned to Arnold. Signal lights flashed. The synchronized motors operating the camera, the recording device and the test record all were halted instantly. Johnny Arnold flung open the door of his refrigerator and stepped out, wiping his brow. The man in the recording room had thrown off the interlock, placed the test record on the reproducer and taken the film from the recording machine and placed it in a box to go to the laboratory.

There was a general exodus into a room arranged like a theater, the monitor room. It was built like a theater so that the director could hear the voices as an audience would hear them. Everyone took seats. Up in the recording room, the man there put on the soft test record which ho had made and which can be played but once. Voices began to speak again. Through the horns we heard what had been said on the stage.

At one point in pronouncing a word, one of the speakers had slurred it.

“Take it over again,” ordered the director. Just for one word mispronounced the whole scene had to be re-taken.

It is impossible to estimate the thousands upon thousands of dollars that have been spent by the motion picture people for equipment, buildings, machinery and for experiment in this business of adapting the industry to the talkies. At this one studio two stages, each measuring 98 by 70 feet and constructed of the expensive, soundproof material have already been built. The recording building has 12,000 feet of floor space, the monitor room, 3,500 square feet. In the recording room were four separate recording machines, the battery rooms, cutting rooms, projection rooms equipped with the latest simplex projectors arranged for both record and light ray sound projection, elaborate switchboard equipment, power house installation and modulators necessary to handle sound recording.

Every bit of “juice” used on the soundproof stage comes from batteries. The regular line supply varies too much for the exceedingly fine work required of these machines.

Moving picture men admit that their big investments have only begun. They expect developments in the talkie industry that will mean the expenditure of additional millions for several years to come.