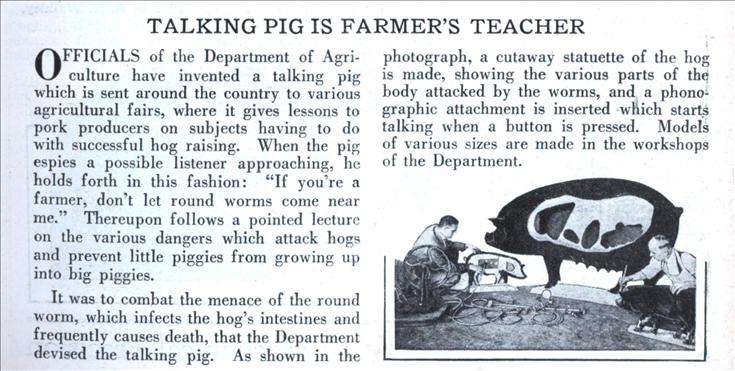 OFFICIALS of the Department of Agriculture have invented a talking pig which is sent around the country to various agricultural fairs, where it gives lessons to pork producers on subjects having to do with successful hog raising. When the pig espies a possible listener approaching, he holds forth in this fashion: “If you’re a farmer, don’t let round worms come near me.” Thereupon follows a pointed lecture on the various dangers which attack hogs and prevent little piggies from growing up into big piggies.

It was to combat the menace of the round worm, which infects the hog’s intestines and frequently causes death, that the Department devised the talking pig. As shown in thephotograph, a cutaway statuette of the hog is made, showing the various parts of the body attacked by the worms, and a phonographic attachment is inserted which starts talking when a button is pressed. Models of various sizes are made in the workshops of the Department.