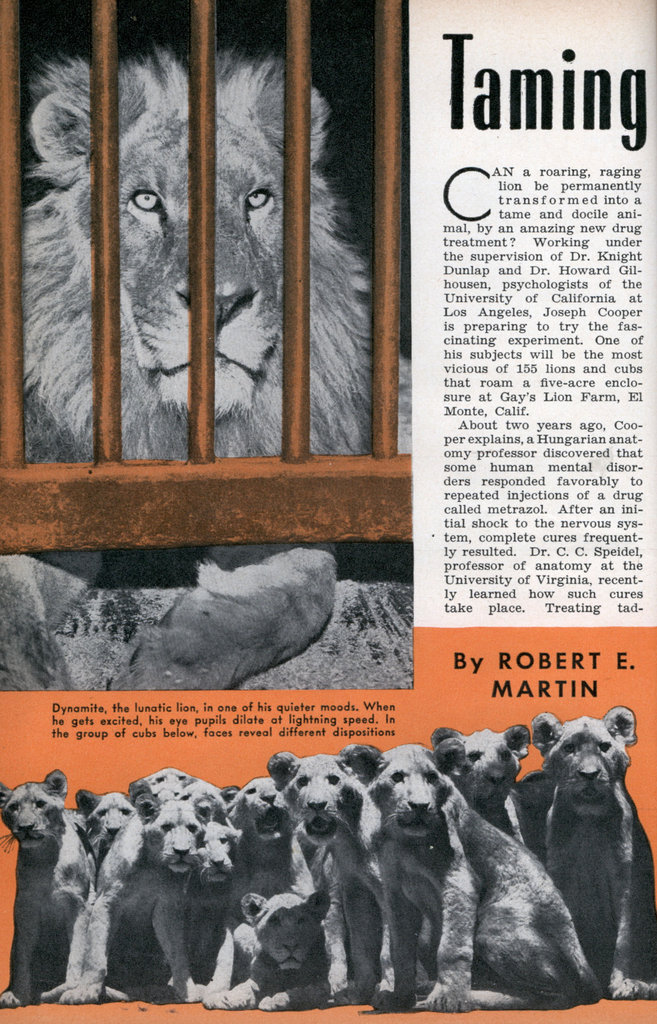 CAN a roaring, raging lion be permanently transformed into a tame and docile animal, by an amazing new drug treatment? Working under the supervision of Dr. Knight Dunlap and Dr. Howard Gilhousen, psychologists of the University of California at Los Angeles, Joseph Cooper is preparing to try the fascinating experiment. One of his subjects will be the most vicious of 155 lions and cubs that roam a five-acre enclosure at Gay’s Lion Farm, El Monte, Calif.

About two years ago, Cooper explains, a Hungarian anatomy professor discovered that some human mental disorders responded favorably to repeated injections of a drug called metrazol. After an initial shock to the nervous system, complete cures frequently resulted. Dr. C. C. Speidel, professor of anatomy at the University of Virginia, recently learned how such cures take place. Treating tadpoles under the microscope, he found that metrazol attacked certain nerve endings and junctions in the brain, so that they literally disappeared. New-ones soon grew in their places, and the sick brain became well once more. It was like breaking a poor telephone connection, and substituting a good one.

Boldly carrying on the experiments with the most dangerous of subjects, Cooper has been trying out metrazol injections on African lions to determine the dosage needed to bring about mental changes. For safety, the animal subject is placed in a “squeeze cage” devised at the farm for veterinary treatment (P. S. M., June ’39, p. 96). Secured in any desired position by four notched handles, one side of the cage moves inward to pin the animal against the opposite side, while Cooper deftly injects the chemical into its blood stream.

After these preliminary experiments, Cooper intends to try the metrazol “taming” treatment upon Dynamite, his prize patient. This hulking mass of concentrated meanness has killed five other male lions in gang fights. So much as point a finger at him, as he glowers at you from a cage, and the pupils of his eyes open with camera-shutter speed from the size of a dime to that of a half dollar. Roaring and clawing to get at you, he flies into tantrums of rage, exhibiting all the outward symptoms of homicidal mania. If Cooper can give a lion like Dynamite the disposition of a lamb, he will have accomplished a feat never before achieved by a psychologistâ€”or by anybody else. Twice weekly for two years, Cooper has been studying the mental processes of African lions. In “psychoanalyzing” his subjects, he doesn’t make them run through mazes, like rats and guinea pigs. Instead, he constantly observes their natural behavior, in fighting, playing, feeding, and mating. His keen-eyed observations at the big lion farm, jotted down in his ever-handy notebook, reveal fascinating and little-known facts about the habits of the king of beasts.

During his 1,000-hour vigil, 150 litters were born. Cubs a few-weeks old, he observed, snarl ferociouslyâ€”with the incongruous accompaniment of a sound like a kitten’s purr. By the time their first birthdays roll around, the snarl is backed up by a roar that no one could mistake.

Older lions attack unusual objects, when they are released from their cages into the open stockades. They made short work of a pair of dummies in an old car. A strange animal would meet the same fate. When lions occasionally quarrel among themselves, they first square off and box with forepaws. After one lunges, others join in.

When Cooper first came to the El Monte farm, he could tell one lion from another only by its size. Soon he learned another way to recognize them. Twenty minutes before the noonday mealâ€”two tons of succulent horse tenderloinâ€”one lion scratches at the steel-sheathed gate. Another, as nearly as a lion can, turns handsprings. Some sit tensely; others pace the cage.

Again, when Cooper approaches cubs sunning themselves on an elevated platform, they show marked differences in temperament. Some hang back, while the more venturesome come forward. One snaps repeatedly at his hand. Perhaps metrazol will save this budding trouble maker from Dynamite’s unhappy state.