For a much more in depth discussion of early computer controlled milling machines check out this excellent 1952 Scientific American article: “An Automatic Machine Tool”. It’s amazing to think that people are building these things in their garage now for a few hundred bucks. 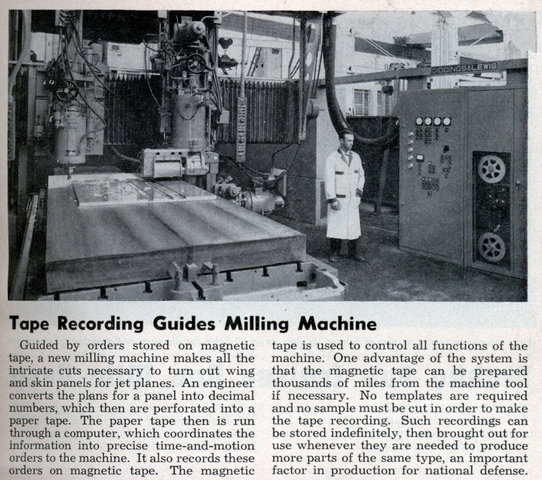 Guided by orders stored on magnetic tape, a new milling machine makes all the intricate cuts necessary to turn out wing and skin panels for jet planes. An engineer converts the plans for a panel into decimal numbers, which then are perforated into a paper tape. The paper tape then is run through a computer, which coordinates the information into precise time-and-motion orders to the machine. It also records these orders on magnetic tape. The magnetic tape is used to control all functions of the machine. One advantage of the system is that the magnetic tape can be prepared thousands of miles from the machine tool if necessary. No templates are required and no sample must be cut in order to make the tape recording. Such recordings can be stored indefinitely, then brought out for use whenever they are needed to produce more parts of the same type, an important factor in production for national defense.