There is something very disturbing about a person who kills and stuffs thousands of animals while proclaiming that he is granting them “Eternal Life”. It sort of reminds me of a fanatically religious serial killer who thinks he’s actually helping his victims when he kills them. 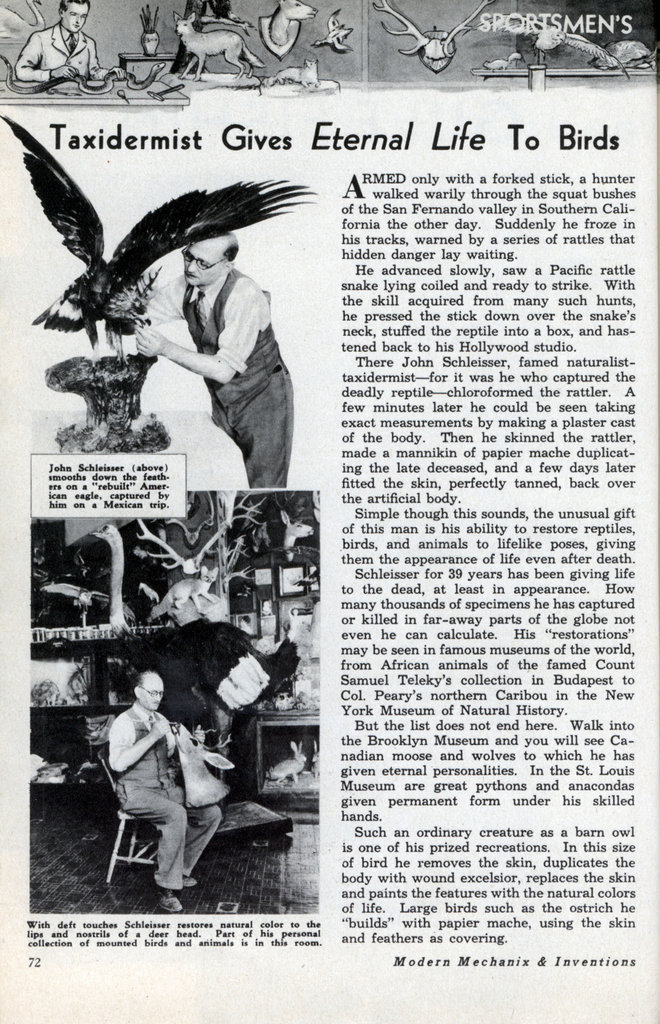 ARMED only with a forked stick, a hunter walked warily through the squat bushes of the San Fernando valley in Southern California the other day. Suddenly he froze in his tracks, warned by a series of rattles that hidden danger lay waiting.

He advanced slowly, saw a Pacific rattle snake lying coiled and ready to strike. With the skill acquired from many such hunts, he pressed the stick down over the snake’s neck, stuffed the reptile into a box, and hastened back to his Hollywood studio.

There John Schleisser, famed naturalist-taxidermistâ€”for it was he who captured the deadly reptileâ€”chloroformed the rattler. A few minutes later he could be seen taking exact measurements by making a plaster cast of the body. Then he skinned the rattler, made a mannikin of papier mache duplicating the late deceased, and a few days later fitted the skin, perfectly tanned, back over the artificial body.

Simple though this sounds, the unusual gift of this man is his ability to restore reptiles, birds, and animals to lifelike poses, giving them the appearance of life even after death.

Schleisser for 39 years has been giving life to the dead, at least in appearance. How many thousands of specimens he has captured or killed in far-away parts of the globe not even he can calculate. His “restorations” may be seen in famous museums of the world, from African animals of the famed Count Samuel Teleky’s collection in Budapest to Col. Peary’s northern Caribou in the New York Museum of Natural History.

But the list does not end here. Walk into the Brooklyn Museum and you will see Canadian moose and wolves to which he has given eternal personalities. In the St. Louis Museum are great pythons and anacondas given permanent form under his skilled hands.

Such an ordinary creature as a barn owl is one of his prized recreations. In this size of bird he removes the skin, duplicates the body with wound excelsior, replaces the skin and paints the features with the natural colors of life. Large birds such as the ostrich he “builds” with papier mache, using the skin and feathers as covering.