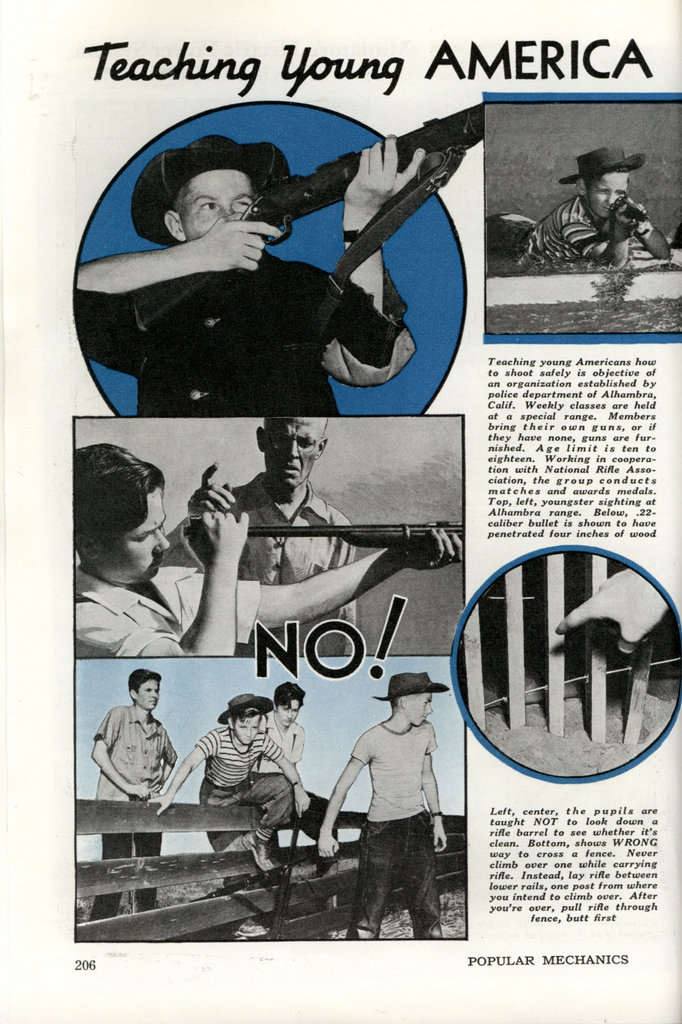 Teaching young Americans how to shoot safely is objective of an organization established by police department of Alhambra, Calif. Weekly classes are held at a special range. Members bring their own guns, or if they have none, guns are furnished. Age limit is ten to eighteen. Working in cooperation with National Rifle Association, the group conducts matches and awards medals. Top, left, youngster sighting at Alhambra range. Below, .22-caliber bullet is shown to have penetrated four inches of wood.

Left, center, the pupils are taught NOT to look down a rifle barrel to see whether itps clean. Bottom, shows WRONG way to cross a fence. Never climb over one while carrying rifle. Instead, lay rifle between lower rails, one post from where you intend to climb over. After you’re over, pull rifle through
fence, butt first.

Above, typical group of boys and girls shooting at Alhambra range. They fire only one shot, never attempting to operate automatic rifles. Telescopic device shown at right in photo is used for checking hits on targets. Circle (at right), correct way to examine inside of rifle barrel is to place a piece of mirror in firing chamber. Muzzle is then pointed toward the sun and inside of barrel is inspected easily in the mirror. At the range the breech of every rifle must be kept open except when actually on the firing line.

Below, rifle is fastened on box; bull’s-eye is held in front of white paper twenty feet away. As novice sights, bull’s-eye is moved until lined up with sights. Then pencil mark is made through its center on the paper, left. Process is repeated. Usually a novice’s dots are far apart. To pass test, three dots must be within one-eighth inch of each other.