What, Popular Mechanics shill for the NRA? Never! 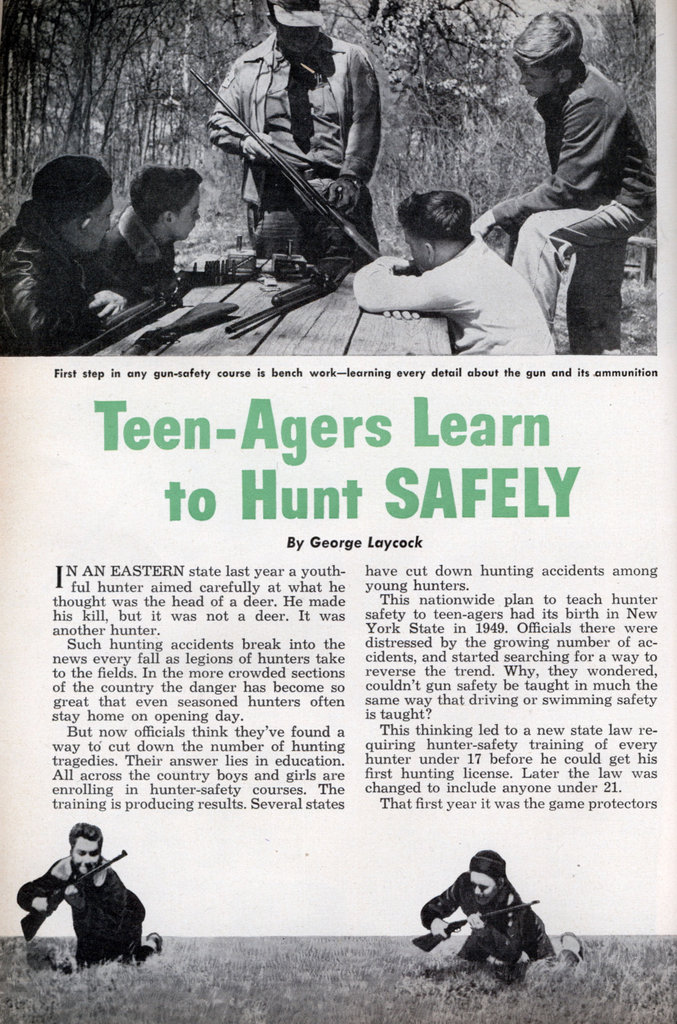 IN AN EASTERN state last year a youthful hunter aimed carefully at what he thought was the head of a deer. He made his kill, but it was not a deer. It was another hunter.

Such hunting accidents break into the news every fall as legions of hunters take to the fields. In the more crowded sections of the country the danger has become so great that even seasoned hunters often stay home on opening day.

But now officials think they’ve found a way to cut down the number of hunting tragedies. Their answer lies in education. All across the country boys and girls are enrolling in hunter-safety courses. The training is producing results. Several states have cut down hunting accidents among young hunters.

This nationwide plan to teach hunter safety to teen-agers had its birth in New York State in 1949. Officials there were distressed by the growing number of accidents, and started searching for a way to reverse the trend. Why, they wondered, couldn’t gun safety be taught in much the same way that driving or swimming safety is taught?

This thinking led to a new state law requiring hunter-safety training of every hunter under 17 before he could get his first hunting license. Later the law was changed to include anyone under 21.

That first year it was the game protectors who taught hunter safety. They soon learned that this left little time for enforcing game laws. At this point the New York officials called in the National Rifle Association and asked its members to set up a hunter-safety program.

The NRA, working closely with the National Education Association, designed a four-hour course in gun safety for beginning hunters. By 1952 New York had 1162 instructors qualified to teach the course. There were 19,611 students in their classes that year and, almost immediately, hunting accidents in New York began to drop.

Meanwhile the idea was spreading to other states. By early 1955 five other states, New Jersey, New Hampshire, South Dakota, California and Massachusetts, had passed laws providing for hunter-safety instruction for beginning hunters. A dozen other states were studying similar laws. Across the country there were 8422 qualified instructors, with some in every state.

By the time other states started to take up this plan, Kentucky, where the tradition of the rifleman is strong, was already well along in its own program to teach gun safety to large groups of teen-agers. The program is taught through Kentucky’s system of Junior Conservation Clubs. There are more than 30,000 young Kentuckians in nearly 700 of these clubs. Behind Kentucky’s Junior Conservation Clubs is ex-schoolteacher Ed Adams who started the program in 1944. At their monthly club meetings and at summer camps these boys and girls study a wide range of outdoor activities. But gun-safety instruction ranks high in the program.

Ed Adams and Kentuckians in general think they’ve hit pay dirt in their gun-safety program. They believe their Junior Conservation Club work is one of the best things to hit the state since Dan Boone came through the woods. “These lessons stick with them,” Adams says. “In later years when they’re hunting they will remember what they’ve learned in their clubs.”

Adams has been told by more than one adult hunter that these trained boys make better hunting companions than most adults who have been hunting for years. One thing that distresses Adams is the fact that many parents aren’t keeping up with their children in learning gun safety. “We are losing some of our kids,” he says, “by accidents that happen in the home where the parent has left a shotgun, rifle or pistol loaded or where ammunition for these weapons is easily accessible.”

Leaders in these gun-safety training programs have no doubt that education is the best attack on the loss of life and limb from hunting accidents. Says the National Rifle Association, “Virtually all hunting casualties are the result of carelessness bred of ignorance, and even one such accident would be entirely too many.”

The real part played by carelessness and ignorance in hunting accidents shows up in the NRA’s “Uniform Hunter Casualty Report.” This report summarizes information on hunting accidents in 24 states and it brings to light some revealing pointers for those who want to go hunting and stay alive. In the states reporting last year, 71 percent of hunting casualties occurred on clear days and 26 percent in open country. In 57 percent of the accidents the gun was fired intentionally. Many victims were mistaken for game.

Among the deaths from guns fired accidentally, a large percentage of hunter victims were shot when they stumbled and fell. Others were killed when the trigger caught on brush, when putting a gun into a car or taking it out, when crossing fences or when loading or unloading a gun. Still others died as a result of horseplay with a gun that was thought to be empty.

Who are the hunters that cause most of the tragedies? The Hunter Casualty Reports come up with some evidence on this, too. Of the cases reported through the NRA from 1950 to 1953, the offending guns in 38 percent of the accidents were carried by hunters 19 years old or younger.

The hunter-safety program has grown large but not unwieldy. There is still close personal work between instructor and student. “I don’t want my classes to be larger than 12 students,” says Alan Ward, a certified hunter-safety instructor in Madison County, Ohio. Ward, who is also the county conservation officer, teaches hunter safety in his free time. His classes are typical of the hundreds of hunter-safety classes conducted in all parts of the country.

Each of his classes meets four times. They’re supposed to get in an hour’s training at each meeting. “But the fourth meeting,” says Ward, “is usually on Saturday morning and it often lasts the full morning.” During the first three meetings boys and girls learn the parts of a gun, how to take care of a gun and the different kinds of ammunition. They learn the rules for safe gun handling under a variety of field conditions. They learn that a gun improperly handled can be a lethal weapon and that a slip of the finger can kill a man.

Actual gun handling and range practice are an important part of the training and all students are supposed to shoot with either shotgun or rifle before they have completed the course in gun safety.

This four hours of concentrated instruction is enough to give the youthful hunter the knowledge he needs to handle guns safely. It is also enough to give him confidence in his weapon and instill in him some pride in becoming known among his companions as a safe hunter, a hunter who would be a good field companion. Once the teen-agers have completed their course and successfully passed the written quiz, they are given an NRA Safe Hunter shoulder patch and a pocket card.

The gun-safety rules these young hunters learn in hundreds of classes across the country are rules all hunters should know and obey. Among the most important ones are these:

1. Treat every gun as a loaded gun.

2. Aways control the direction of the muzzle. There is no excuse for pointing a gun at other people or allowing others in your party to do so.

3. Know what you’re shooting. Always identify your game before you point your gun. Too many hunters are shot each year because other hunters mistook them for deer, bears or even rabbits or squirrels.

Other prime rules include: Be sure the barrel is free of obstructions, unload unattended guns, don’t mix alcohol with shooting, always unload a gun before crossing obstacles in the field and keep the safety locked until you’re ready to pull the trigger.

These safety precautions are becoming standard procedure for a growing number of beginning teen-age hunters. Your future hunting trips promise to be safer ones because we’re giving our teen-agers basic training in hunter safety.