Not too shabby. He gets touch-tone, voice mail, car phones, cell phones, pagers and computer dial up service. 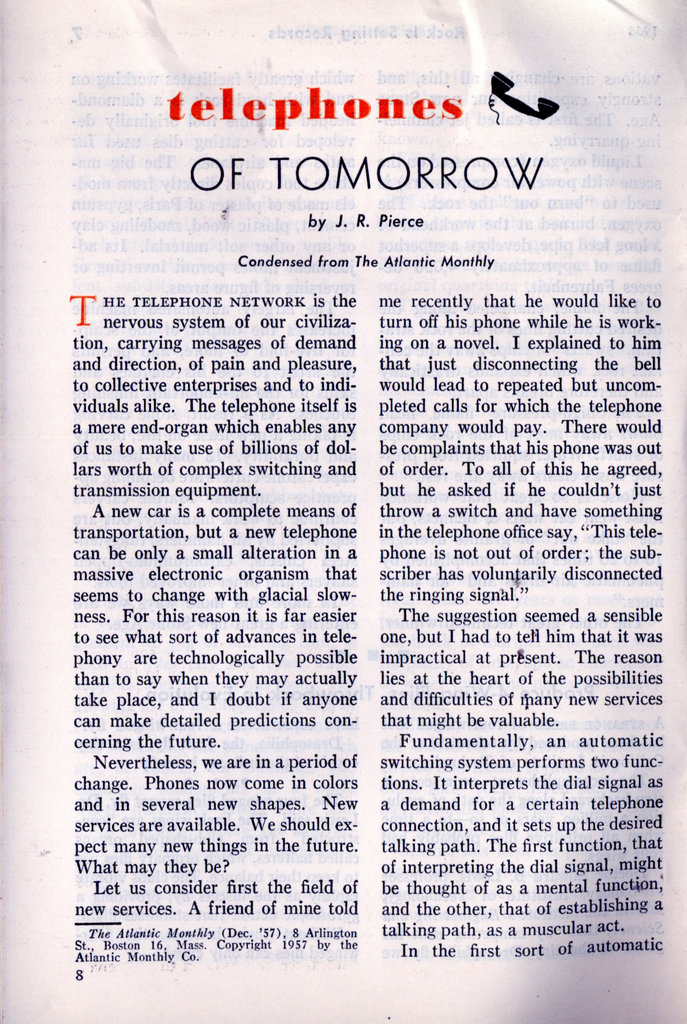 Condensed from The Atlantic Monthly

The telephone network is the nervous system of our civilization, carrying messages of demand and direction, of pain and pleasure, to collective enterprises and to individuals alike. The telephone itself is a mere end-organ which enables any of us to make use of billions of dollars worth of complex switching and transmission equipment.

A new car is a complete means of transportation, but a new telephone can be only a small alteration in a massive electronic organism that seems to change with glacial slowness. For this reason it is far easier to see what sort of advances in telephony are technologically possible than to say when they may actually take place, and I doubt if anyone can make detailed predictions concerning the future.

Nevertheless, we are in a period of change. Phones now come in colors and in several new shapes. New services are available. We should expect many new things in the future. What may they be?

Let us consider first the field of new services. A friend of mine told me recently that he would like to turn off his phone while he is working on a novel. I explained to him that just disconnecting the bell would lead to repeated but uncompleted calls for which the telephone company would pay. There would be complaints that his phone was out of order. To all of this he agreed, but he asked if he couldn’t just throw a switch and have something in the telephone office say, “This telephone is not out of order; the subscriber has voluntarily disconnected the ringing signal.”

The suggestion seemed a sensible one, but I had to tell him that it was impractical at present. The reason lies at the heart of the possibilities and difficulties of any new services that might be valuable.

Fundamentally, an automatic switching system performs two functions. It interprets the dial signal as a demand for a certain telephone connection, and it sets up the desired talking path. The first function, that of interpreting the dial signal, might be thought of as a mental function, and the other, that of establishing a talking path, as a muscular act.

Common-control systems, which first appeared in 1921, represent a tremendous evolutionary advance. In them, a ”brain” carefully records the dial signal and then deliberates on what to do. When it has decided, it sets up the talking path by using physically separate equipment.

At present, the most advanced switching systems in use are composed primarily of relays, though a few vacuum tubes and transistors have been grafted onto them. However, work is progressing on switching systems made up of tiny transistors, which operate thousands of times as fast as relays. Such an electronic switching system will have a quick, subtle, and adaptable brain which can be taught many new tricks.

Electronic switching has opened our eyes to all sorts of new services which are technically possible, whether or not they ever come into actual use. Among these is certainly the phone-disconnect notice my friend wanted.

Other possibilities include the ability to dial a selected group of telephone numbers by setting a pointer, or by one or two pulls of the dial (by pushing one or two buttons, if pushbuttons replace dials); a central answering and recording service, in which there is no special equipment on the subscriber’s premises; ways of breaking into a busy connection in case of an emergency; and a host of other possibilities.

Which among these will come into being and when they may be available, no one can tell, but electronic switching will make them easy.

By using transistors, it has been possible to put a radio receiver as good as that used in mobile telephony into a case little larger than a pack of cigarettes, and which includes batteries for four days of continuous operation. If a person carries such a receiver with him in the city, it is possible to signal him selectively by making his receiver—and only his —buzz when he is wanted on the telephone. He can then go to the nearest phone and call to see what the message is. Indeed, commercial radio-paging services are in operation in some cities, and the telephone companies are trying them out.

Does this assure a two-way phone in your car or perhaps even in your pocket? Technically, it makes such things very near. By using transistors, we can build a tiny receiver which can operate 24 hours a day without a noticeable drain on a car’s batteries. Including a suitable transmitter, the whole car telephone could fit into the glove compartment or be incorporated with the radio. Further, pocket telephones are not technically absurd.

Will NEXT year’s car come equipped with a telephone as well as a radio? Not unless something changes. And that something has nothing to do with the technological limitations of ft radio, nor is it a matter within the control of the telephone companies.

Of the radio frequencies which are suitable for mobile telephony, those which extend from perhaps 50 to 890 megacycles, the government has allocated roughly 50 percent to ultra-high-frequency television, 7 percent to ordinary television, 25 percent for government use, 4 percent for amateur radio, 4 percent for FM, and only one-third of 1 percent for all mobile telephony. The continued assignment of these frequencies to other uses could keep the telephone out of your car, plane, or pocket, however great our technical know-how may become.

There will still be telephones in your home and office, however, and these are bound to become better in a number of ways. Indeed, one ambition which has been often expressed is to make the telephone so good that telephoning will be as satis- factory as a face-to-face meeting.

Partly, what is called for is a better voice signal. A good telephone call is perfectly intelligible, but hardly hi-fi. However, for special uses, such as conference use, a higher quality of speech can be provided by means of special circuits.

Of course, if we are to confer satisfactorily by telephone, we will have to transmit pictures as well as speech. Television transmission facilities are available, but they are at present too costly for anything but very important conferences or very large meetings. For some reason, however, they haven’t been used much for either.

I feel certain some day pictures will be sent not only in connection with conferences but in connection with some telephone calls as well. A couple of years ago the Bell Laboratories experimented with a device called Picturephone, which sent a series of still pictures, one a second, over an ordinary telephone connection. However, the pictures proved too fuzzy to be of any real use. Perhaps a picture intermediate in quality between Picturephone and present-day television is called for.

To provide picture transmission to telephone users, new and more economical ways of sending electrical signals must be developed. Happily, great advances have been made in the electronic art of signal transmission. One of these is the transistor, which in amplifying a signal uses much less power than a vacuum tube. In fact, the power consumed by a transistor amplifier can be sent over the same wires used to carry the signal itself.

Another advance is a new way of sending signals over wires, called pulse-code modulation. Ordinarily, we send a voice or picture signal as a smoothly but rapidly varying electric current which must be transmitted and amplified repeatedly with no distortion. However, a way has been found of representing such signals as sequences or patterns of off-on pulses. Such pulses can be amplified simply and cheaply without any degradation in the ultimately reproduced voice or picture.

Further, such signals can be sent great distances through pipes called waveguides. They can travel as electromagnetic radiation having a frequency perhaps 50 billion cycles per second through thousands of miles of a metal tube around 2 inches in diameter.

I believe that ultimately such transmission by means of off-on pulses will make television as an accessory to the telephone economically possible, for some uses at any rate.

Such electrical pulses as I have mentioned above are the natural language of computers and business machines. These electronic brains have never used pen and paper, nor human speech. They write upon and read from magnetic tape in a language consisting of sequences of pulses. One can speak to them or hear from them, control them or be controlled by them at a distance, by transmitting such pulses by wire or radio. Sometimes such machines translate their internal language of pulses into printed English characters, but this is merely for the benefit of their human associates.

We usually think of such machines as huge giants chattering away at a superhuman rate. Indeed, they do talk back and forth over communications channels, but the world of tomorrow will be full of a host of electronic machines of all degrees of size and complexity. In fact, today’s teletypewriter is an early member of that race. Cash registers and other business machines often punch a record of their operations and conclusions into paper tape, which can be transmitted electrically from point to point.

Future machines will almost certainly record on and be operated from magnetic tape. We can imagine a time when small machines in stores and offices will store up a tape record of each day’s operations. Then a big machine at a bank or an accounting service will call the little machines up during the night and record what happened during the day.

I like to think of a time when each secretary’s typewriter will produce a magnetic record as well as the usual typescript, a record which can be filed, reproduced, sorted over, or transmitted to some distant concern by quick electronic means. Indeed, an experimental device the size of a typewriter has already been built which will transmit text recorded on a magnetic tape over a telephone circuit at a rate of about 800 words a minute.

Beyond this there are more distant and less concrete possibilities. .The design, construction, and installation of the transatlantic telephone cable, in which 104 delicate and precise vacuum-tube amplifiers function on the bottom of the ocean, beyond the reach of human adjustment or repair, was an engineering feat of a scope comparable with that of establishing an artificial satellite.

In the future we may have manned as well as unmanned satellites, established in their orbits for scientific or military reasons. If manned satellites come to be, they will provide valuable radio relay sites for spanning the oceans with television as well as voice. Perhaps later on we will have to face the problem of communicating with men on the moon, or on Mars.

• • •
Calculations show that the electronic techniques used in the telephone system will do even this job. But when will men go to Mars? And will they perhaps go there to get away from the ever-present and insistent telephones?

——————————-
An electrical engineer, John Robinson Pierce took his B.S. from California Institute of Technology in 1933 and his Ph.D. three years later. He then joined the Bell Telephone Laboratories where he has risen to be director in research of electrical communications.