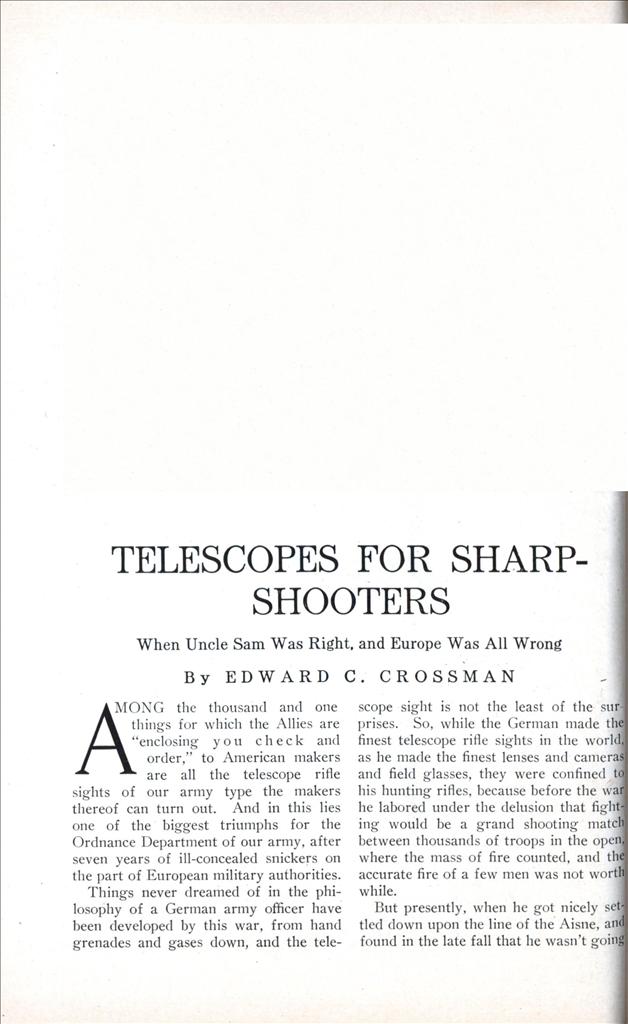 When Uncle Sam Was Right, and Europe Was All Wrong

AMONG the thousand and one things for which the Allies are “enclosing you check and order,” to American makers — — are all the telescope rifle sights of our army type the makers thereof can turn out. And in this lies one of the biggest triumphs for the Ordnance Department of our army, after seven years of ill-concealed snickers on the part of European military authorities.

Things never dreamed of in the philosophy of a German army officer have been developed by this war, from hand grenades and gases down, and the tele- scope sight is not the least of the surprises. So, while the German made the finest telescope rifle sights in the world, as he made the finest lenses and cameras and field glasses, they were confined to his hunting rifles, because before the war he labored under the delusion that fighting would be a grand shooting match between thousands of troops in the open where the mass of fire counted, and the accurate fire of a few men was not worth while.

But presently, when he got nicely set tied down upon the line of the Aisne, an found in the late fall that he wasn’t going of the British grew steadily worse. At ill-defined marks on poorly contrasting backgrounds, the telescope added about one hundred per cent to the efficiency of the sharpshooter, and the favorite form of sport of the German became that of lying snugly hidden five hundred yards or so away, and pot-shooting persons on the other side who by all the laws of chance should have been missed by the first two shots, and so warned to make for shelter. The Britisher found out to his surprise that nobody in England made telescope sights worth while, so he sent in hurry-up orders to the American firm equipped to turn them out for this Government, to rustle a few over to the firing lines in Western Europe.

Then and there a board of American army officers, who had recommended the adoption of the telescope in 1908, sat down and chuckled right merrily. It was the first time in seven years they had had a chance to chuckle so far as the telescope sight was concerned; their judgment had been vindicated by the “flop” to their position by their most patronizing critics.

In the American army, the telescope rifle sight is issued at the rate of two to each infantry company, the two best shots to get to Ypres or any other prey back of the lines of the Allies, and that the sport of war in the west had settled down to a glorified sniping match between trenches, he changed his mind about the telescope sight. He stuck a few of the fine Zeiss sights on his Mausers, and went into the business of potting uncareful chaps on the other side. Also he encouraged some of his old Landsmen to get out their old Schiitzen single shot rifles, and do fancy work on heads showing up in and about the line of the other trenches.

Both games proved to be howling successes, and the British, who used to think that only they could shoot, became violently enraged at the recipients of the attention of the parties with the telescopes and the single shot target rifles. At first many of the Allies were shot through the brain, when they exposed their heads above the trenches. Later, while some «of them still were shot through the head from this cause, they were not shot through the brain. Early experience had been enough to keep anybody so equipped from sticking up his head during daylight hours.

More and more of these telescope sight rifles came into use, and the temper in each company being given them and required to practice with them. The instrument is prismatic, the prisms being used to invert the reversed image presented by the object glass, and to shorten up the instrument, while obtaining the necessary focal length for the optical effect required. The power is 6—that is, a brick chimney 6 feet wide, would appear 36 feet wide in the glass. The field is 4-1/2 degrees.

It is sighted up to three thousand yards, twenty-five yards to each small division, the change being made by a graduated dial that actuates a lever on which the glass itself is hung. Stadia lines in the glass, adjusted to include a man 5 feet 8 inches at one thousand yards, and so give a rough estimate of range, are added to help make the instrument complete. The glass is easily detached by pushing it off a slide which is fastened permanently to the left side of the rifle.

The telescope rifle sight, primarily is merely a telescope to magnify the mark, and so adjusted that where its cross-hairs rest, the bullet of the rifle will strike. Originally—back nearly to the days of the Civil War, the telescope was a long, thin, hungry looking tube, fastened more or less rigidly to the barrel of the rifle, and nearly as long. In these days of thin barrels, whipping like fish-rods under the strain of high pressure cartridges, such instruments would be wrecked. Also optical science has improved its methods and its product.

The modern telescope rifle sight is prismatic, and is as compact and as bright in field as the prismatic field glass. Inside the tube, like the cross-hairs of the transit, are either the cross-hairs of old form, or else of the more modern German type, a steel picket, running half way up the field of the glass, and supposed to be the point of aim. The bullet strikes where the sharp picket point touches.

In the American type of army telescope rifle sight the cross-hairs are etched on a thin glass plate or reticule, and are thus not breakable like the thin real hairs of the transit and those in the old telescope sight.

In the telescope there is no front or rear sight, the aiming line is the line of “collimation” of the lenses. Adjust the scope for the right range, put the intersection of the cross-hairs or the picket point on the mark, and pull the trigger. Good-by mark, if you did your part correctly.

The advantages are merely those of the field glass, added to the fact that the blurring and blotting out of a hard to see image by trying to aim at it with ordinary metal sights, is done away with in the telescope. Soldiers or guns blending in with the background, and impossible to aim at even if they are found with the field glasses are made very uncomfortable by the use of the telescope rifle sight. The powers range from 3 to 6, the latter, the power of the American glass as issued to the sharpshooters of the army.