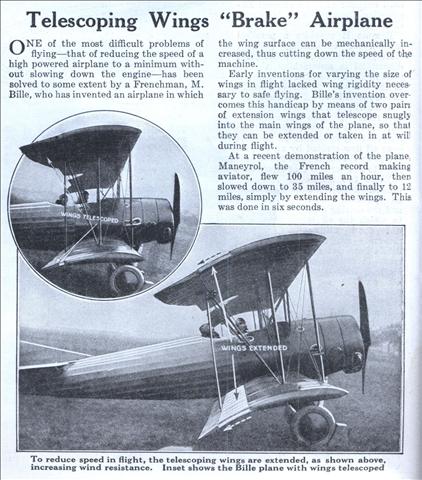 ONE of the most difficult problems of flying—that of reducing the speed of a high powered airplane to a minimum without slowing down the engine—has been solved to some extent by a Frenchman, M. Bille, who has invented an airplane in which
the wing surface can be mechanically increased, thus cutting down the speed of the machine.

Early inventions for varying the size of wings in flight lacked wing rigidity necessary to safe flying. Bille’s invention overcomes this handicap by means of two pairs of extension wings that telescope snugly into the main wings of the plane, so that they can be extended or taken in at will during flight.

At a recent demonstration of the plane Maneyrol, the French record making aviator, flew 100 miles an hour, then slowed down to 35 miles, and finally to 12 miles, simply by extending the wings. This was done in six seconds.