TELEVISION Advances ON MANY FRONTS (Nov, 1936) 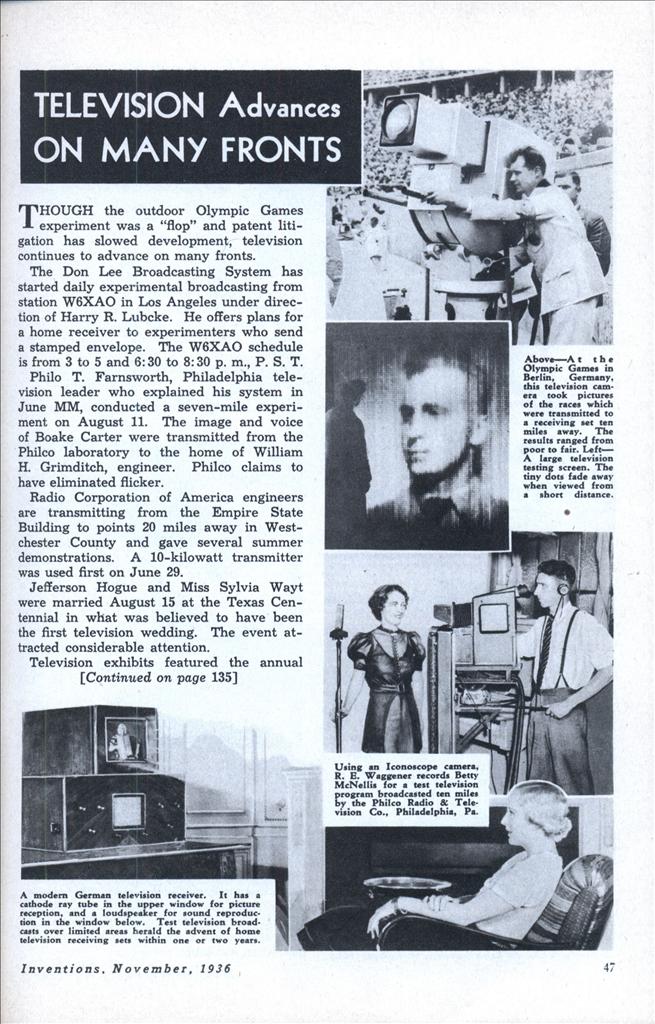 TELEVISION Advances ON MANY FRONTS

THOUGH the outdoor Olympic Games experiment was a “flop” and patent litigation has slowed development, television continues to advance on many fronts.

The Don Lee Broadcasting System has started daily experimental broadcasting from station W6XAO in Los Angeles under direction of Harry R. Lubcke. He offers plans for a home receiver to experimenters who send a stamped envelope. The W6XAO schedule is from 3 to 5 and 6:30 to 8:30 p. m., P. S. T.

Philo T. Farnsworth, Philadelphia television leader who explained his system in June MM, conducted a seven-mile experiment on August 11. The image and voice of Boake Carter were transmitted from the Philco laboratory to the home of William H. Grimditch, engineer. Philco claims to have eliminated flicker.

Radio Corporation of America engineers are transmitting from the Empire State Building to points 20 miles away in Westchester County and gave several summer demonstrations. A 10-kilowatt transmitter was used first on June 29.

Jefferson Hogue and Miss Sylvia Wayt were married August 15 at the Texas Centennial in what was believed to have been the first television wedding. The event attracted considerable attention.

Television exhibits featured the annual Berlin and London radio shows. In England, the British Broadcasting Co. has installed equipment in Alexandra Palace and plans extensive use beginning in November.

Aided by a 300,000 yen subsidy from the government, Japanese scientists are building a transmitting station which Dr. K. Takayanagi, one of the leading experimenters, hopes to have in operation this winter. Waseda University investigators are experimenting with natural color.

The Don Lee television division on Sept. 1 transmitted a newsreel, the sound portion over KHJ and the sight part via W6XAO, from the Don Lee Bldg, at 7th and Bixel Sts., to a home at 2441 W. Silver Drive, over three miles away and behind two hills.