Science And Mechanics
Issue: Jan, 1932
Posted in: Television
10 Comments on Television in the Theatre At Last! (Jan, 1932)

It almost seems redundant to post this. Who among us has not heard this story told a thousand times at the October feast of the teletheatre? 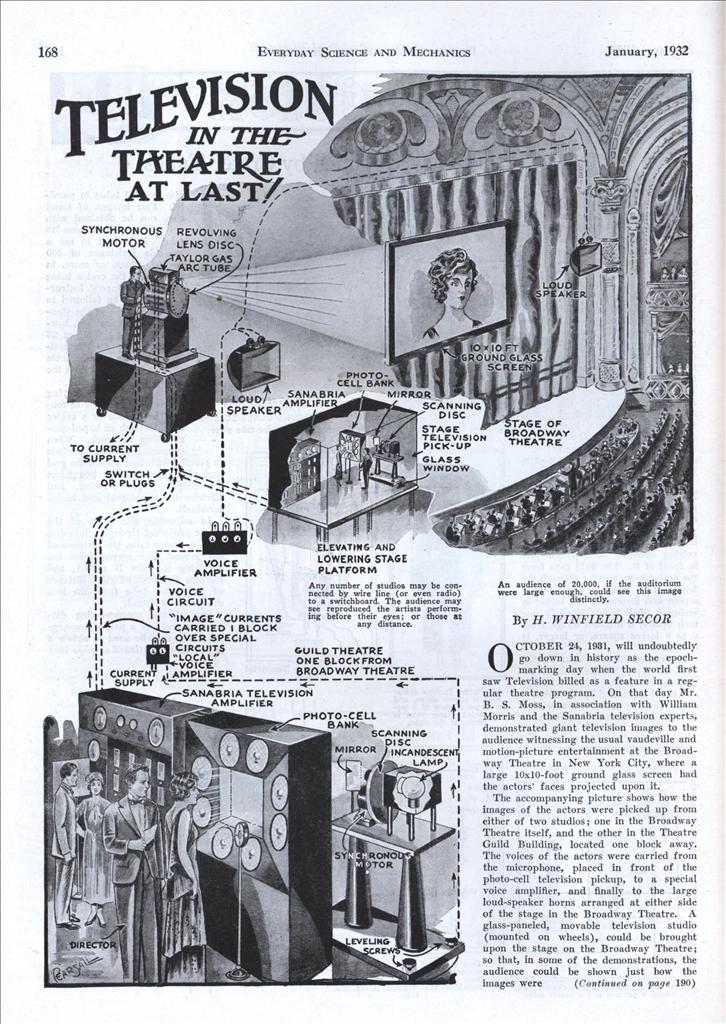 Television in the Theatre At Last!

October 24, 1931, will undoubtedly go down in history as the epoch-marking day when the world first saw Television billed as a feature in a regular theatre program. On that day Mr. B. S. Moss, in association with William Morris and the Sanabria television experts, demonstrated giant television images to the audience witnessing the usual vaudeville and motion-picture entertainment at the Broadway Theatre in New York City, where a large 10×10-foot ground glass screen had the actors’ faces projected upon it.

The accompanying picture’ shows how the images of the actors were picked up from either of two studios; one in the Broadway Theatre itself, and the other in the Theatre Guild Building, located one block away. The voices of the actors were carried from the microphone, placed in front of the photo-cell television pickup, to a special voice amplifier, and finally to the large loud-speaker horns arranged at either side of the stage in the Broadway Theatre. A glass-paneled, movable television studio (mounted on wheels), could be brought upon the stage on the Broadway Theatre; so that, in some of the demonstrations, the audience could be shown just how the images were picked up by the magic photo-cells and, after passing through the elaborate Sanabria amplifier, flashed on the large screen above, as the illustration clearly shows.

For picking up the images of the subjects standing before the television transmitter, a powerful, yet non-glaring scanning-beam of light, projected from a 1,500 candle-power incandescent lamp through a 45-hole scanning disc (holes only—no lenses) was employed. The light rays, reflected from the actors’ faces, which were made up in the special (and quite startling) colors, found best for television transmission, impinged on the bank of eight light-sensitive photo-cells; the fluctuations in the photo-cell currents, corresponding to the lights and shadows in the various facial images, in turn caused corresponding variations in the highly-amplified image currents transmitted to the high-power “neon arc” tube, placed behind the receiver’s scanning disc.

From the Theatre Guild pickup apparatus a block away, the television-image currents were received over special wire cables, and caused to modulate a powerful “neon-arc” tube; this tube being a recent development which gives sufficient modulated light to illuminate a screen as large as 10 feet square. Some idea of the power handled by the neon-arc tube, at the receiver, may be obtained from the fact that, instead of the usual 35 to 50 milliamperes used for exciting the neon “crater” tubes used in the new “home type” television receivers, this tube has a current of over 1,000 milliamperes passing through it.

At the receiver, a powerful synchronous A. C. motor drives a scanning disc, specially designed and built by Mr. Sanabria. This disc contains 45 lenses, each about three inches in diameter, arranged in three spirals of 15 each.

It is contemplated to build four of these auditorium-type television demonstration outfits with which experts will tour the country and appear in a chain of theatres. This initial presentation undoubtedly marks the beginning of everyday application of this newest of the electric arts.

Theatre audiences, not to mention those in private homes, will consider television an everyday necessity, and expect to “see” as well as hear the latest news, and such exciting events as foot-ball games, on the television screen, at the moment they are occurring.

The question may be asked: “But how will a football game occurring in the afternoon be shown to an evening audience?” The answer is quite simple: the television images of the actual game as played in the afternoon for example, will be flashed to the matinee audience, play by play. A branch circuit from the television transmitter will record the television signals on a film, just as sounds are recorded on a “talkie” film; and, as many times thereafter as desired the film containing the “image record” can be run through a suitable amplifier and the image reconstructed on the receiver screen or screens.