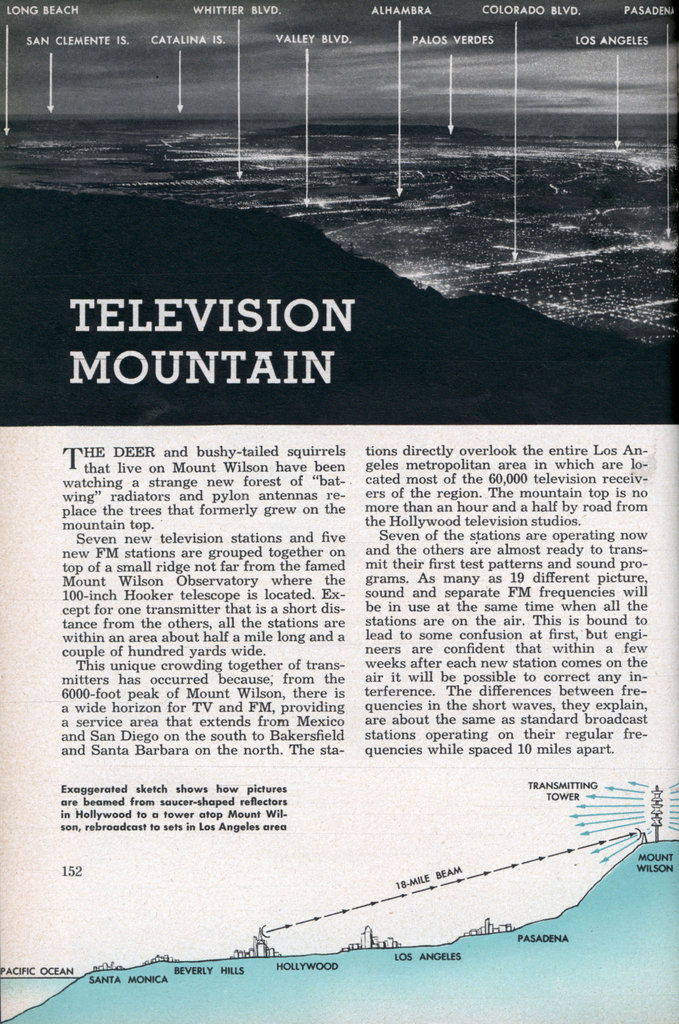 THE DEER and bushy-tailed squirrels that live on Mount Wilson have been watching a strange new forest of “bat-wing” radiators and pylon antennas replace the trees that formerly grew on the mountain top.

Seven new television stations and five new FM stations are grouped together on top of a small ridge not far from the famed Mount Wilson Observatory where the 100-inch Hooker telescope is located. Except for one transmitter that is a short distance from the others, all the stations are within an area about half a mile long and a couple of hundred yards wide.

This unique crowding together of transmitters has occurred because, from the 6000-foot peak of Mount Wilson, there is a wide horizon for TV and FM, providing a service area that extends from Mexico and San Diego on the south to Bakersfield and Santa Barbara on the north. The sta- tions directly overlook the entire Los Angeles metropolitan area in which are located most of the 60,000 television receivers of the region. The mountain top is no more than an hour and a half by road from the Hollywood television studios.

Seven of the stations are operating now and the others are almost ready to transmit their first test patterns and sound programs. As many as 19 different picture, sound and separate FM frequencies will be in use at the same time when all the stations are on the air. This is bound to lead to some confusion at first, but engineers are confident that within a few weeks after each new station comes on the air it will be possible to correct any interference. The differences between frequencies in the short waves, they explain, are about the same as standard broadcast stations operating on their regular frequencies while spaced 10 miles apart.

An advantage of concentrating all the stations is that a television-receiving antenna down in the lowlands will pick up all of the stations equally well and may be pointed permanently toward the mountain. It won’t be necessary to rotate the antenna for best reception when switching from .one station to another.

Each station is simply a big transmitter.

All the programs originate in Hollywood or Los Angeles or at other points and are relayed to the mountain for broadcasting. FM goes up the hill by telephone cable, as do some of the TV sound programs. All video and, in some cases, the accompanying sound as well is transmitted to the mountain by microwave radio beam. KTLA, for instance, has big parabolic reflectors on top of its Hollywood studio and other reflectors at its Mount Wilson station 18 miles away, in line of sight. Pictures and sound are beamed from the studio to the transmitter and are radiated back over Hollywood and the surrounding country. When KTLA is televising a remote program, such as a baseball game, it sends a mobile beam transmitter out to the location and either beams the program direct to Mount Wilson or else back to Hollywood, from which point it is relayed by radio to the mountain.

Some of the television stations have installed their own beams, while others are using a radio link provided by Pacific Telephone and Telegraph Company. The phone company has erected its own building on the mountain for receiving the beamed programs that it handles, and for relaying them to the adjacent transmitters by coaxial cables. The microwave receiving antennas are mounted side by side in a large room inside the building instead of on the roof, where they would be exposed to the weather. The exterior wall of the room, in front of the antennas, consists of one large window of transparent plastic sheeting that offers no resistance to the incoming high-frequency energy.

The building also serves as one of the radio receiving and transmitting points for the phone company’s mobile urban and mobile highway ra dio services which together have about 150 subscribers, mostly public utilities, doctors and trucking concerns. Also in the building is a small switchboard that handles the phone calls of the new radio community.

Typical of the television stations on Mount Wilson is the new NBC transmitter, KNBH, built at a cost of half a million dollars. It is equipped with a standard RCA TT-5A transmitter that puts an effective radiated power of 27.5 kilowatts (for picture) on its five-element superturnstile antenna. Three picture chains and two sound chains are available in the transmitting room. If any one circuit develops trouble, the operator can switch to another chain at once. Nine hundred different tubes are in use when the station is on the air. The main picture and sound-transmitting tubes are air-cooled by means of blowers and are water-cooled by means of internal piping. The station has its own distilling plant for creating pure water for cooling tubes.

The station building also contains a three-room apartment for its caretaker; for emergencies it has a bunkroom in which four operators may sleep, and an electric kitchen equipped with a freezing unit and stocked with enough food, frozen and canned, for three months.

This is because the radio operators and engineers on Mount Wilson expect to be snowed in for days or weeks at a time in spite of their proximity to the semi-tropical country a mile below them. Snowplows may be able to clear the roads immediately after a heavy storm but a combination of a heavy snow plus landslides may block the road for longer periods. All the stations are stocked with food against this contingency.

All of them, too, have been elaborately protected against heavy winds, lightning and icing of their antennas. Winds as strong as 85 miles an hour have been recorded, with gusts estimated at 100 miles per hour. All antenna towers have been designed with this condition in mind.

Icing conditions occur during the winter months and rime ice may build up to 10 times the diameter of the member on which it collects. To avoid any possible detuning of an antenna because of the ice load, most of them have been provided with internal electrical strip heaters to keep them warm. One 500-watt heater is placed inlside each lobe of each batwing, a total of 20 heaters for a five-element superturnstile.

All the TV, FM and combination antennas are grounded direct to the earth, this being permissible because short-wave radiation is a matter of resonance tuning rather than insulation. Normally, a grounded antenna would dissipate the energy of any lightning bolts, but on Mount Wilson the thin layer of topsoil overlies a rock formation that is not an ideal conductor. At the Don Lee TV and FM stations more than half a mile of copper strip has been buried underground to connect the two towers with a water tank, various water pipes and other objects in an effort to help dissipate the discharges of lightning. Similar precautions have been taken by the other stations. Some of them have connected their ground systems together to obtain additional coverage. Most of the transmitting equipment is further protected by automatic relays that open instantaneously when overloaded, and by lightning gaps in the circuits.

The stations are served by a commercial power cable. In anticipation of power failures each station has installed stand-by motor generators, gasoline or diesel-driven, that start automatically and take over the load any time the commercial power supply fails. The little community of technicians is prepared to dig in no matter how they are cut off from the rest of the world and to keep their transmitters operating just as long as the beamed programs come up to them from Hollywood.

Here is the status of the Mount Wilson stations: KECA-TV (ABC) To begin operation in 1949.

That’s the list of stations on the mountain at present. Half a dozen other FM stations have applied for construction permits and expect to obtain locations on Mount Wilson or close by. There are no additional open television channels allocated to the Los Angeles area, but if additional channels are opened for picture radio, still more TV transmitters probably will join the tight cluster of stations and tall towers on Mount Wilson.