I love the idea that army spotters in patrolling airplanes will fax in hand drawn maps of the enemy positions they find. 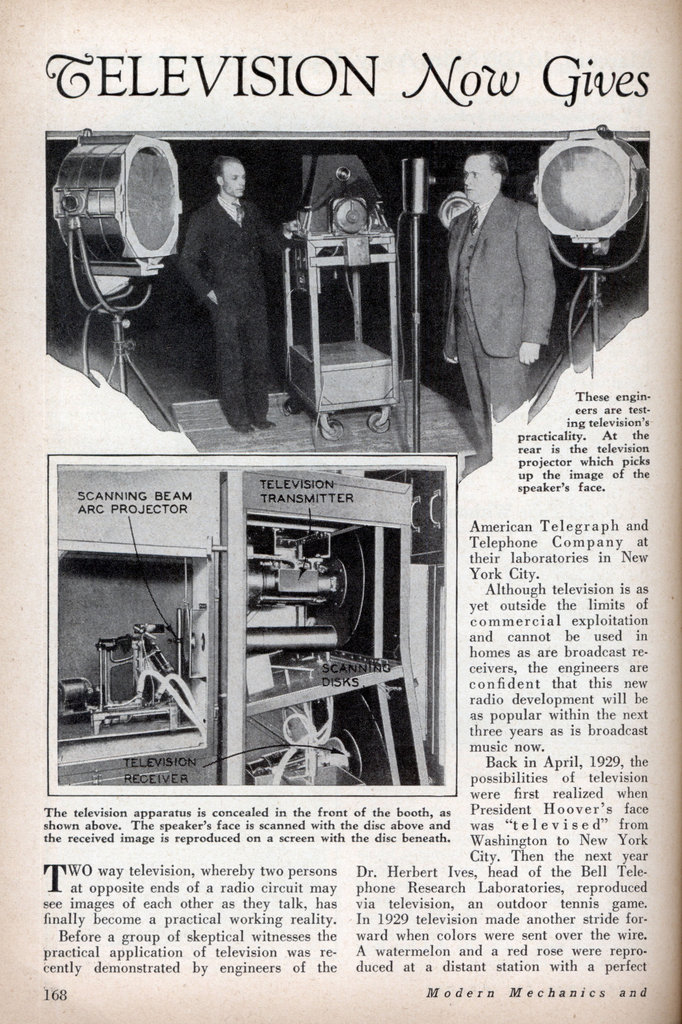 TWO way television, whereby two persons at opposite ends of a radio circuit may see images of each other as they talk, has finally become a practical working reality.

Before a group of skeptical witnesses the practical application of television was recently demonstrated by engineers of the American Telegraph and Telephone Company at their laboratories in New York City.

Although television is as yet outside the limits of commercial exploitation and cannot be used in homes as are broadcast receivers, the engineers are confident that this new radio development will be as popular within the next three years as is broadcast music now.

Back in April, 1929, the possibilities of television were first realized when President Hoover’s face was “televised” from Washington to New York City. Then the next year Dr. Herbert Ives, head of the Bell Telephone Research Laboratories, reproduced via television, an outdoor tennis game. In 1929 television made another stride forward when colors were sent over the wire. A watermelon and a red rose were reproduced at a distant station with a perfect replica of their colors.

And now comes the two way television, a practical reality, allowing two people to look each other in the eyes as they talk.

At the recent test the demonstrator entered the three-sided television booth and seated himself in a swivel chair, facing a glass screen about a foot square, and marked with the words “Ikonophoneâ€”watch this space for television image.” Above was a small aperture through which the scanning beam played on the speaker. Behind the booth, though all invisible to the speaker, was concealed the intricate transmitting and receiving apparatus, only the frame and the aperture being visible.

When the current to the apparatus was turned on and transmission about to begin, the face of the demonstrator became illuminated by a faint glow of blue light which was given off by the photo electric cells stationed at various points around the booth. These photo electric cells, known as “radio eyes,” are the means whereby the image of the speaker is picked up and transmitted to the distant receiving station where the other speaker is seated.

Even though the speakers were situated three miles apart, it would not have made a particle of difference, the engineers stated, if they had been located an entire continent apart.

When transmission begins the words on the glass frame facing the speaker vanish as if by some magic trick, and there appears the animated image of the speaker at the other end of the circuit. The features are sharp and distinct, and are shown forth in black and white on a pinkish background.

While the demonstrator was watching the figure of the other person, his face was in turn being scanned for transmissionâ€” that is, his features were being swept 18 times a second by a scanning beam and transmitted by the impulses set up in the light sensitive photo-electric cells above his head. The flickering blue light created by the cells is in reality very bright, and would be hard on the eyesight, were the rays not run through a blue glass, creating a light to which the human eye is insensitive.

When the demonstrator speaks his voice is picked up by a microphone concealed overhead and the other speaker’s voice is in turn reproduced by a loud speaker, also concealed within the booth.

Television has also proved its serviceability for war time use in the recent air maneuvers held at Mather field. Here the entire activities of the planes were directed by radio, and maps of supposed enemy territory were charted out by a plane flying over the area and transmitted by television to the headquarters.

The chart was placed on a television cylinder in the plane and the details of the map were picked up by a photo electric cell and transmitted to “GHQ”, where another synchronized disc reproduced the chart, thus informing the commanding officers directly as to the nature and position of enemy forces.

THE latest and most spectacular advance of television equipment took place recently at a vaudeville theatre in Schenectady, which the General Electric leased for a demonstration of television movies. This performance was the result of years of experimentation on the part of Dr. E. F. W. Alexanderson and his colleagues.

When the curtain parted, revealing a six-foot screen, Dr. Alexanderson stepped forward and modestly announced that the audience was about to hear and witness on the screen television images and voices of vaudeville actors performing at his laboratory about a mile away.

At Dr. Alexanderson’s studio, images of the performers were being picked up by photo electric cells, and the television signals created by the light impulses broadcast along with the voices of the entertainers. At the theater where Dr. Alexanderson was acting as operator of the television movie projector, the voice and image signals were received simultaneously, the voice signals issuing from the loud speakers, while the television signals were transformed into light impulses, which controlled the projector beam.

A small device called a monitor telopti-con transformed the radio waves into the electrical impulses which operate the sensitive light valve in the projector. This valve, a recent invention which makes television movies possible, controls the light from the arc, which is projected through the valve and the rotating disc. This disc breaks up the light in synchronism with the scanning disc at the transmitting station.

The entire television and voice receiving apparatus was located behind the screen.